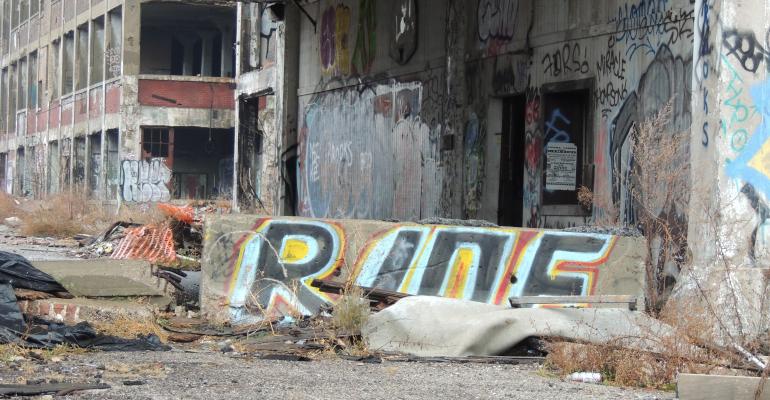 Rome has its ruins, we have ours in Detroit.

People may debate about which Roman ruin is the best. Some say it’s the Coliseum. Others vote for the Forum or the Baths of Caracalla. They’re all amazing.

By consensus, the mother of Motor City ruins is the Packard plant. It doesn’t amaze, it dismays as a titanic industrial wreck: 35 acres (14-ha) of decay near the city center.

What’s baffling is that the factory stopped making cars in 1954. Yet it uselessly sticks around, long ago crossing the line of overstayed welcomes.

It looks like a bombed-out Berlin factory after an Allied air raid. Post-World War II Germany razed such sites long ago. But in Detroit, which during the war served as America’s “Arsenal of Democracy,” the decrepit Packard plant stays put.

It has become a freak show.

Photojournalists from around the world come to shoot it as an ugly and eerie representation of a troubled town.

Urban explorers poke around the premises with the zeal of hikers climbing a mountain. It is the Everest of abandoned buildings.

Underground rave parties have been held there. Imagine the chit-chat at those: “Look out for falling concrete on the dance floor.” “This place is a dive.” “What’s a nice girl like you doing in a dump like this?”

The Detroit Free Press recently ran a 10-page special section bannered “Why It Has To Go.” The newspaper says it's time to stop talking and start swinging the wrecking ball on East Grand Blvd.

It’s bad when an auto factory closes. It is mindboggling when one shuts down and sits for 57 years, idle except for a few minor tenants occasionally staking out a spot here and there.

Once upon a time, the plant stood proud, making cars for an upscale market.

The complex closed after Packard merged with another teetering auto company, Studebaker. They looked like two drunks trying to help each other across the street. Neither made it. The Packard name fell in 1959. Studebaker stumbled along for a few more years, then collapsed.

Ironically, although the Packard plant is one big mess, the old Packard proving grounds is a tenderly preserved historic site 22 miles (35 km) to the north.

Suburban development long ago gobbled up the track itself. But the old facility’s Tudor-style buildings remain. Those include an engineering structure, a repair garage and a lodge with dormitory-style rooms. A utilitarian timing tower and ornate grand-entrance gate also survive.

A foundation maintains the place. Stored in one building are pillars and a stone slab with “Packard Motor Car Co.” chiseled into it. The foundation salvaged those artifacts from the doorway of the plant’s administration building. They are the only things worth saving.