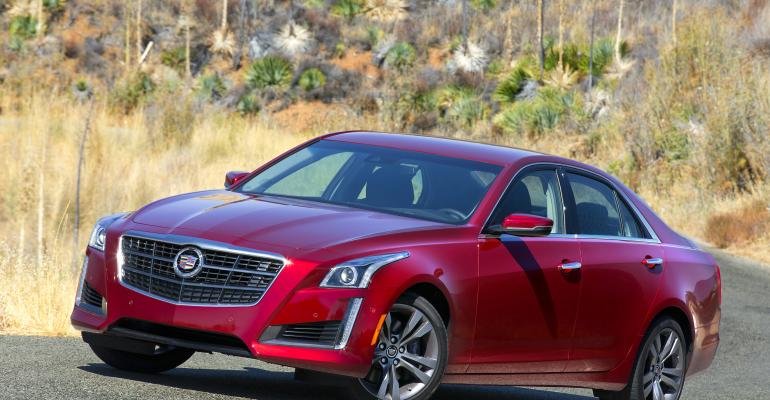 General Motors, long known as a designer of relatively heavy car and trucks, turned a lot of heads last year when its all-new Cadillac ATS compact sports sedan arrived as the lightest vehicle in its segment.

Now the automaker duplicates that feat with the redesigned Cadillac CTS midsize sedan, arriving at U.S. dealers in the coming weeks, proving its new lightweighting strategy is not a one-and-done phenomenon.

“It’s a complete change in our engineering philosophy,” GM performance-car engineering chief Dave Leone says at the CTS media launch in Santa Barbara, CA, a place where pudginess borders on the profane.

Leone’s comments reinforce what Ken Kelzer, chief engineer on the ATS, said trackside in Atlanta for the launch of the ATS exactly one year ago referring to GM’s new commitment to lighter cars and trucks.

“Every gram, by every engineer, every day” was the mantra for the sports sedan’s development, Kelzer said.

But could GM stick with its new weight-watching plan?

It appears so, as the new CTS with the base 2.0L turbocharged engine and 6-speed automatic transmission with rear-wheel-drive tips the scales at a sprightly 3,616 lbs. (1,640 kg). That’s more than 240 lbs. (105 kg) lighter than the previous-generation model, despite being 5 ins. (12.7 cm) longer. The CTS is a full 200 lbs. (87 kg) lighter than the BMW 528i, long considered the performance benchmark in the segment.

Leone points to a host of lightweight materials, such as aluminum doors that shed a combined 55 lbs. (24 kg) from the steel ones on the older CTS. There’s still a lot of steel used, but much of it is an ultra-high strength variety, so gauges are thinner in many places. In fact, structural stiffness increased 40%, although the car loses weight overall.

The B-pillar of the new CTS is made from two pieces of UHSS, compared with eight pieces of high-strength steel on the older model. GM also sheds weight by varying the thickness of the new B-pillar down to as a little as 1.4 mm depending on crashworthiness needs at a particular point. Edges, or flanges, of the structure are scalloped, cutting out unnecessary mass.

Altogether, more than 30% of the car’s steel needs are fulfilled by UHSS, Leone says.

Many of the chassis pieces and attachments are either aluminum or magnesium, with individual pieces seeing weight reductions between 30% and 60%. A magnesium powertrain bracket, for example weighs just 1 lb. (0.4 kg).

And just like the smaller ATS, each of the underbody links joining the chassis to the body were made at right angles, eliminating the need for heavy reinforcing brackets. In some cases, structural adhesives were used in place of brackets.

“The CTS is now the lightest and most agile in its class,” says Leone, who estimates the Cadillac is between 4.0% and 5.5% more “mass efficient” than a BMW 5-Series or Mercedes E-Class.

One of the major contributors to GM’s lightness of being is a new design approach that focuses on making the highest-volume model as light as possible and adding content where needed rather than starting with a single car to satisfy the content demands of every region.

GM, in short, has stopped over-engineering it vehicles.

“I don’t have to make every vehicle carry all that scar tissue,” Leone says.

It’s a bit like ordering only what you need off the menu, instead of every item. It makes for cheaper tab at the end of the night, too.

“I buy my steel by the pound, just like everyone else.”