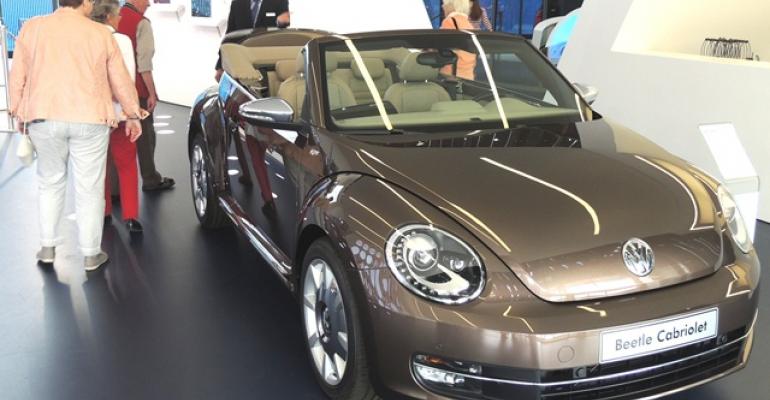 WOLFSBURG, Germany – Not many places in the world can rival Detroit’s claim to the mantle of “Motor City.”

But this industrial town in Lower Saxony, which literally sprang to life in 1938 when Volkswagen began building a plant here to launch what became the first Beetle, can make a solid case.

Yes, the plant was part of the Nazi war machine during World War II, after which the British military controlled it and fostered Beetle production in an attempt to create jobs. By 1974, VW had manufactured 11.9 million Beetles here, and it was just a matter of time before an automotive dynasty dominated Wolfsburg the way Ford dominates Dearborn, MI.

So what better place for a theme park touting Europe’s largest auto making collective? Autostadt (translation “Auto City”) opened 13 years ago this month as a celebration of everything Volkswagen.

Some 26 million guests have visited, many of them students on field trips and families on vacation, to enjoy the meticulously landscaped grounds and modern architecture and, of course, to pay tribute to Germany’s national treasure: the car.

Yes, Autostadt is a slick infomercial for VW Group, but the marketing is not so blatant as to dissuade visitors from paying E15 ($20) to get in the door.

Visitors crowd into free-standing pavilions dedicated to many of the individual brands. The latest addition is Porsche, whose building opened one year ago, interestingly, before VW took control of the sports car maker.

Throughout Autostadt, the contemporary aesthetic and overall presentation are first-rate, leaving visitors with brilliant imagery as a reminder of the brands. Most of the pavilions are as glitzy as the world’s top auto shows, but accessible every day.

Vintage vehicles from around the world occupy the ZeitHaus museum, including a spectacular ’30 Cadillac V16 Series 452, ’37 Lincoln Zephyr and ’64 Jaguar E-Type. A Benz Velo Comfortable, from 1899, represents the first series-production motorcar.

But the real draw to Autostadt is the ability to pick up the car you just bought through your neighborhood dealer and stay in a luxury hotel on the grounds if an overnight stay is necessary. Buyers gather at the family-friendly customer center and watch for their names on a large electronic billboard to take delivery of the keys and find their new purchases stacked within one of two massive glass towers.

VW also wanted Autostadt visitors to experience the many types of road surfaces from around the world, so the driveway running alongside the park straight to the Ritz Carlton hotel consists of some two dozen sections that include cobblestone, parallel timber planks, paver stones and several types of asphalt and concrete.

In 2012, the VW brand handed over 173,000 vehicles at Autostadt, about one-quarter of all vehicles it sold in Germany. With such a dramatic cementing of the bond between man and machine, is it any wonder why Germans love their cars so?

Not to be overlooked at Autostadt are the children, who learn the rules of the road by tootling in Beetle-shaped go-carts on a makeshift track. They learn basic mechanics and how to change a tire.

Metro Detroit has The Henry Ford, a world-renowned village and museum dedicated to history and technology beyond the automobile, but there is no retail component as in Wolfsburg.

VW’s success with Autostadt suggests perhaps there is more than one Motor City.