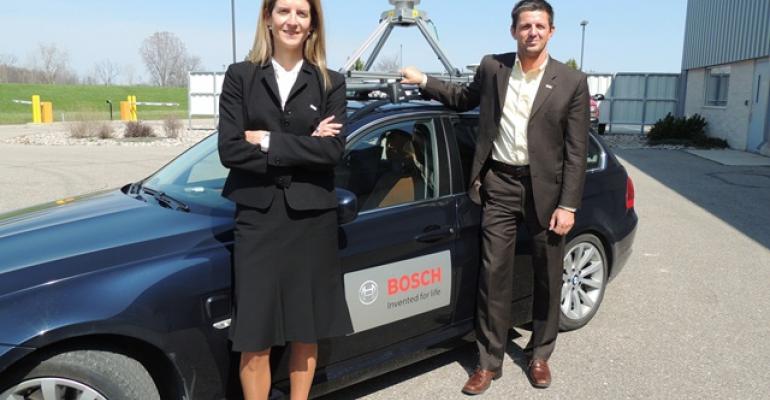 FLAT ROCK, MI – Cars might be able to drive themselves someday, but how many people truly are ready to trust their lives to a computer and parts bought at the lowest price?

Auto makers and suppliers are convinced the market for autonomous vehicles is for real, and these companies are sinking millions of dollars into development programs to prove their viability.

German supplier Robert Bosch, with expertise in the essential building blocks (such as braking, adaptive cruise control, sensors, sign recognition and video technology) has built prototype vehicles capable of partially automated driving and even highly automated driving before the Holy Grail is attained: fully autonomous self-driving cars, which likely won’t be available before the end of this decade.

From Bosch’s perspective, this technology revolution requires a staged rollout.

This spring, the supplier is launching its fourth-generation mid-range radar system and next year will begin producing a stereo vision camera that helps recognize objects and pedestrians in complex situations such as construction sites.

Also next year, Bosch will debut a traffic-jam assistant that keeps vehicles in their lanes during stop-and-go conditions.

All three devices represent additional building blocks on the way to self-driving cars.

For proof that the market for automated driving is for real, consider that Bosch began producing radar sensors (mainly for adaptive cruise control) in 2000 and reached 1 million units this spring.

The supplier expects to produce its second million radar units by 2014 and 10 million in total by 2016.

The supplier is expected to decide later this year to move forward with series production of partially automated vehicle technology in 2015 or 2016, Kay Stepper, director of engineering-driver assistance for the North American chassis systems division, tells WardsAuto.

Bosch’s research in Palo Alto, CA, and Abstatt, Germany, centers on fusing together the capabilities of short-range radar, long-range radar, video cameras, Lidar and other sensors to establish 360-degree visibility around a moving vehicle.

“By the time fully autonomous driving arrives, we will be talking about the whole journey, not just about the next 250 m,” she says. “Instead, the system will need to look kilometers and miles ahead. You have to know what’s happening on the road to react to conditions.”

Much of Bosch’s work spanning the past three years focuses on defining requirements for next-generation electronic controllers and sensors that will need to collect a lot more information.

The supplier also is anticipating a regulatory framework that will be taking shape for many years and is bound to differ from region to region.

For instance, some parts of the world have few laws about distracted driving, but many European highways are governed by the Vienna Convention, which requires those behind the wheel to devote their full attention to driving, Aranda says.

Stepper is convinced the industry will solve the technological hurdles for autonomous vehicles before the legislative barriers are cleared.

Naysayers are quick to dismiss autonomous-car research as folly, an affront to the joy of driving, a severed connection between man and machine.

There are other, more positive, ways to look at it.

Need time to balance the checkbook? Do it while driving to visit your daughter in college.

Already spending way too much time texting or talking on the cell phone while driving? Consider autonomous vehicles, which surely will be more attentive and make better and safer decisions, a gift from the heavens.

Feeling groggy behind the wheel? Go ahead, take a nap.

Here’s a benefit many proponents probably haven’t contemplated: Autonomous vehicles will be programmed to exit the fast lane once a slower vehicle is passed.

So even though many Americans think the left lane on a highway is for puttering along, self-driving cars will know better. We could learn something from them.

And how about tailgating? Doesn’t anybody know what “safe trailing distance” means anymore? Some people drive close enough to carry on a conversation with the car ahead, and it’s just plain dangerous.

Autonomous cars will take care of this scourge of the motorways, ensuring a proper gap to the vehicle ahead.

Road rage could be a thing of the past when logical, Spock-like decisions are made and executed.

Technology already has come a long way. Current production vehicles can accelerate and brake on their own and stay within lane markers.

But the next step, allowing a driver to take his hands off the wheel while the car speeds up and changes lanes all by itself – well, that requires a leap of faith.

“You have to trust in the systems,” Aranda says, adding that test clinics have found many consumers receptive.

“Within a few minutes, people understand what’s going on, and they see the system is supporting you and they can relax and start to concentrate on other things. I think it is quite easy to relax.”

One significant problem: First-generation autonomous cars will require redundant systems allowing drivers to work the pedals, steer and give other vehicle commands.

That means additional cost for the vehicle, which is bound to find its way to the sticker price.

But on the bright side, the fast lane will be open.