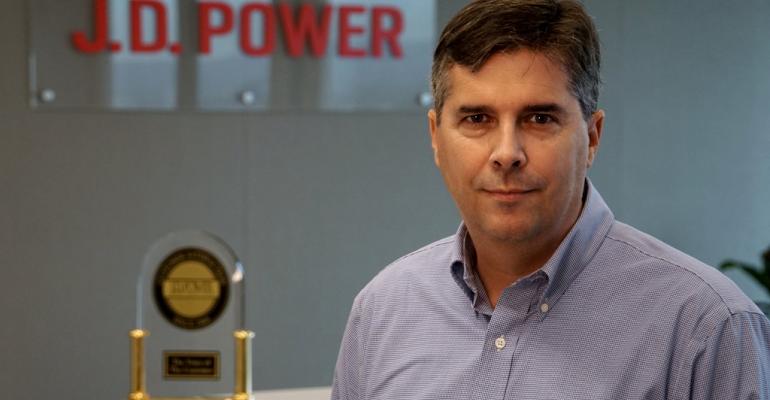 Who Wants Self-Driving Vehicles? Survey: Not Many

LAS VEGAS – In a concept image of a futuristic automotive interior, relaxed occupants sit around a table, leaving the driving to the vehicle itself.

Doug Betts has a problem with that. Not with the idleness of the people in a car without a steering wheel.

Rather, his dismay centers on the material of the table they’re sitting at.

“You have a long way to go in (crash-avoidance) test validations to get to where you can have people sit at a glass table in your self-driving car,” Betts says here at J.D. Power’s inaugural Automotive Revolution conference focusing on what’s ahead for the auto industry.

Betts looks at the future with an open mind, but he tries to keep things in perspective, especially when concepts and predictions get wild.

For example, there is industry talk today that vehicles of tomorrow will read people’s emotions and react accordingly, such as automatically providing soothing music and massages.

Of potential vehicles with acute perceptions of human moods, Betts says to envision a meeting at an auto company or a supplier. The idea of somehow equipping a vehicle to read and react to human moods comes up. “Someone at the meeting says, ‘Let’s go with that.’”

Betts isn’t ready to cast a yea vote there.

Nor, because of his automotive DNA, is he eagerly awaiting the arrival of fully autonomous vehicles, whenever that will be.

“You’re in this industry because you have a passion, and that passion is because you like to drive cars,” he says, adding that autonomous vehicles, by law, will never exceed the speed limit, a turn-off to driving enthusiasts.

If Betts has some doubts about the coming glory of autonomous vehicles, he is not alone, according to ongoing J.D. Power polling of both consumers and industry experts.

“The general public doesn’t want them,” he says, citing the polling. Consumers’ comfort level of potentially riding in one is low (34 or a 1-to-100 index), as is their likelihood of buying one (36).

“That’s a problem, even though (many people in the auto industry are) fired up by this technology. The technical feasibility is high. But the consumer confidence is low.”

Prognosticators have dialed back on when they think fully autonomous Level-5 vehicles will be available for purchase. The predicted prospect now is about 12 years out.

Earlier, some people were predicting there would be 10 million self-driving cars on the road by 2020. If that were the case, “It’s October; we’ve got a lot of work to do,” Betts quips.