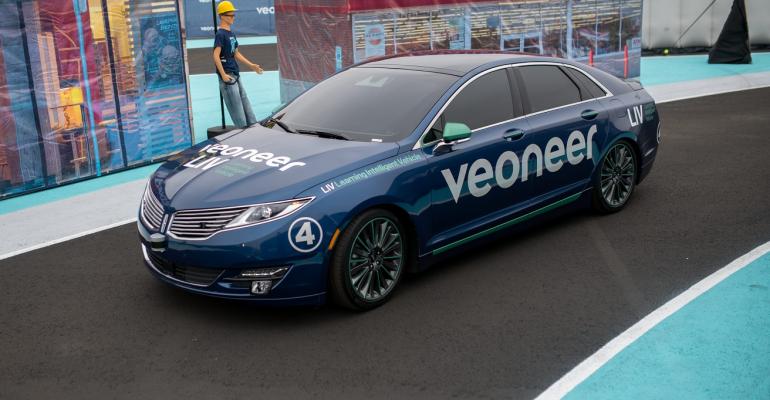 A “tiny fraction” of fully autonomous vehicles on roads by 2030 won’t be able to cut down on the 1.4 million traffic-related fatalities occurring annually around the world, says an executive of the Swedish automotive supplier.

LAS VEGAS – It is widely predicted most new vehicles sold by 2030 will offer an array of advanced driver-assistance systems (ADAS), but “only a fraction, maybe 1% globally, will be Level 5, fully autonomous,” Ola Bostrom, vice president-research for Swedish AV developer Veoneer, tells Wards here during the recent 2019 CES.

So Veoneer is focusing its autonomous-vehicle efforts on “Collaborative Driving,” which lets a vehicle drive itself when safe, but warns and returns control to the human driver on demand, or when it senses it should.

“The car is handling parts of the driving, but the driver is still engaged,” Bostrom explains of the technology that falls somewhere between the SAE definitions for Level 2 (hands off steering wheel) and Level 3 (eyes off the road) AVs.

“We realize that automation is a journey, not necessarily the goal,” he says. “We are addressing the 1.4 million traffic deaths every year, and to be able to really reduce that number, we cannot rely on that tiny fraction of fully autonomous cars. It’s not so easy to replace the human, and I don’t think humans want to be replaced. So we believe more in collaborative driving, where you are working together with the car.”

LIV takes control and pulls over for an emergency vehicle approaching from behind that the driver does not yet see in his mirror. It steers to miss a pedestrian unseen in heavy fog inside a dark tunnel, it warns of accidents and construction workers ahead before they can be seen and it takes control when it sees a driver is distracted.

How does it know to take over? An interior camera sees and interprets not only a driver’s attention level but also his or her emotions. A little creepy? Maybe. But Veoneer sees it as necessary for creating trust between driver and vehicle.

“To do this in a way where you start to trust the car, it has to have intelligence, and that is where artificial intelligence comes into play,” Bostrom says.

The driver-facing camera connected to an AI processor judges cognitive load, thinking and attention level and can tell whether a driver is sleeping or reading.

“You should not be under-stimulated or over-stimulated,” the Veoneer executive says of what the camera is looking for. “Our purpose is to create trust, but not too much trust, and we are measuring the trust. You could design it in a way that when you are sleeping or not paying attention, the car will pull over and stop in a safe way.”

Bostrom notes there already are assist and support systems for drivers in the market, but the next step is to become more collaborative. That is where all the technology comes in.

LIV works via a combination of radar, lidar, camera and connectivity via the cloud to, perhaps, infrastructure in a city.

“You will not be connected 100% of your drive,” Bostrom says. “There will be lost connections. The same with cameras. There will be snow or some other problem. But if you have all these answers, you will be able to predict what is happening. If you know that you’re going into an area where there is no connectivity, you plan for that to happen. That is what we are showing here in the demo, moments of truth.”

The vehicle gives visual and audio signals when a connection is lost or a driver must resume control, such as by displaying color- and pattern-changing lights around the front perimeter of LIV’s steering wheel (pictured below). 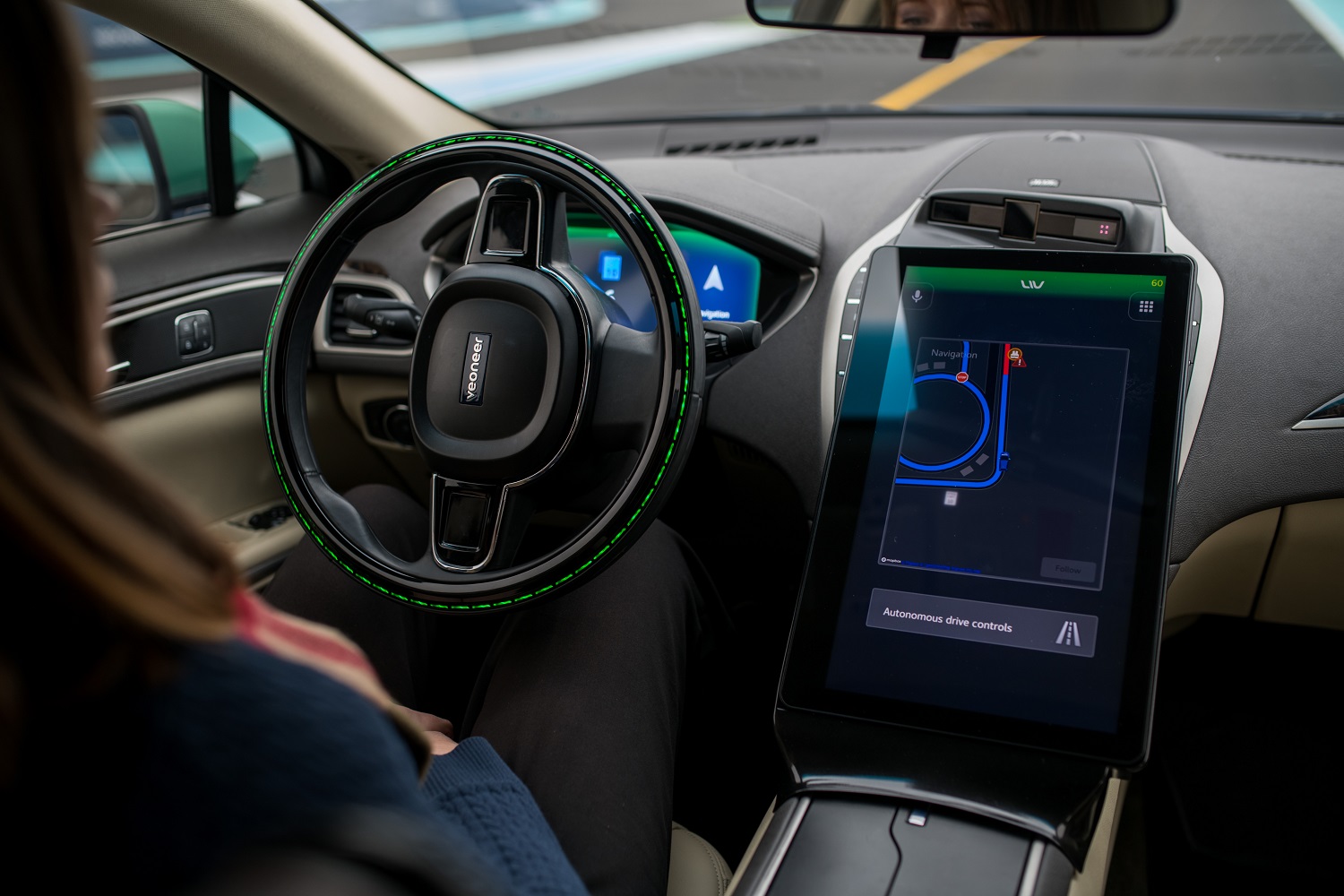 To pull the vehicle over, LIV must be connected to the infrastructure and have good knowledge or what is happening on the road.

For those type of no-good-choice scenarios some AV critics like to mention, such as what if a vehicle can’t be stopped and must decide between hitting a tree (endangering occupants) or hitting a pedestrian, Bostrom says it is something Veoneer has been working on for a long time.

“That will happen extremely few times, but it is of utmost importance to have a moral solution,” he says. “The car is one or two tons of steel, with seatbelts and airbags, so it will slow down to take energy out of the equation and most likely go into the trees to save the pedestrian.”

Bostrom says he is “biased” toward Vision Zero programs with a goal of zero vehicular-related deaths, and where the well-being of those in the car, outside the car and the infrastructure around the car is considered.

“We have an understanding of where and when crashes occur, and we should not necessarily try to avoid all crashes,” he says. “We should avoid injuries and fatalities. Trees might have to be cut down on one side of the road sometimes.”

Another concern of AV critics, the issue of AVs being too law-abiding and thus impeding traffic so as to create dangerous situations, is something Veoneer has been testing.

The supplier, spun off from Autoliv last year, has found if enough vehicles, say 20%, are complying with speed limits, two things can occur. The first outcome is that the other 80% of vehicles follow the same limits because they have to, or “that you actually get from A to B quicker because you don’t get congestion,” Bostrom says. “You use automation to get rid of congestion and automated cars to be pilots guiding the others,” he says.

The core technologies displayed/demonstrated by Veoneer at the 2019 CES include:

In the case of connectivity with infrastructure, Bostrom says he foresees private investment as a way to circumvent the issue of asking taxpayers to fund the deployment of smart traffic lights and other connected traffic-management systems in cities.

“I believe that 5G (implementation) will be more driven by entrepreneurs of the business rather than a city,” he says. “I don’t believe that the city should pay anything.” He says the “usual way” of funding new technology, via private money, likely will be relied upon.

A 2017 study by Black and Veatch revealed uncertainty among municipalities, as well as related commercial and utility businesses, on how to pay for such infrastructure. Only 5% of municipalities surveyed said they would be willing to use property taxes to fund smart-city initiatives.

What will drive deployment of smart infrastructure, be it publicly or privately funded, will be if end users can see its value, says Bostrom. “For example, if they go faster from (points) A to B in a city, then they (will be) interested in getting that connectivity.”

If not, he says Veoneer doesn’t see a future where you are 100% dependent on any particular technology.

“The connectivity part, we see that as a sensor. So if you have radar, camera, maybe lidar, a GPS signal where you are, and then you add connectivity, you fuse all of this. So if it’s heavy rain and the camera doesn’t give you what it normally gives, you rely more on the radar or the connectivity, etc. So we are just adding robustness to the sensor set.”

While LIV has only been demonstrated at CES, Bostrom says Veoneer is hopeful to get the car, a retrofitted Lincoln MKS, into a pilot program that puts average consumers into the driver’s seat.

“So we only build it up here for demonstration...(but) we are looking for different opportunities, especially to understand those moments of truth (experienced) on the closed course, because we are really interested in getting an understanding of the user experience,” Bostrom says.