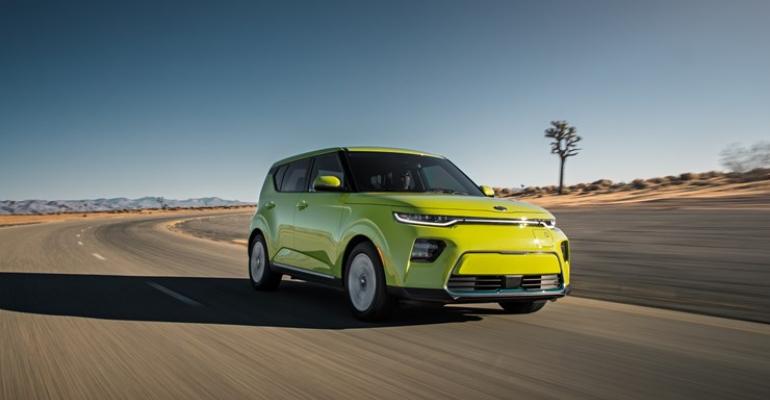 Soul EV not on sale until next year in U.S.
Vehicles>Powertrain

Want a Kia Soul EV? Be Prepared to Wait Longer

Introduced at last fall’s Los Angeles auto show, the new Soul EV has a range of 243 miles on a fully charged battery pack, more than double the 111-mile distance for the ’19 model.

NEW YORK – While it was unveiled at the 2018 Los Angeles auto show with an expected arrival date in 2019, Kia now says the new, longer-range Kia Soul battery-electric vehicle likely won’t go on sale in the U.S. until 2020.

While he doesn’t say why, Cole notes Kia has been having difficulty meeting demand for its Niro electrified-vehicle lineup.

“The global demand for electrification, particularly in Europe with their (carbon-dioxide) taxation, (is high). Everyone in Europe has to by 2020 get to this 95 grams (of CO2 per 100 km target). The demand in other regions of the world for Niro product is extremely high,” Cole says.

The European Union has instituted the world’s strongest CO2 regulations for vehicles. Fines for missing the 95 g/100 km target begin in 2020-2021, and most automakers are expected to incur hundreds of millions, if not billions, of euros in fines, studies have shown.

Thus, many EVs are being steered toward Europe, not the U.S. A top Hyundai Motor America official recently told Wards the Kona EV’s slow start in the U.S. is due to high demand for the vehicle in Europe.

Says Kia’s Cole: “We’ve got to manage (the production) equation here, because obviously we see an opportunity (for electrified vehicles in the U.S.) also. That will be a bit of a balancing act for us globally about supply and demand.”

Save for Tesla’s lineup and a few other models, sales of other brands’ BEVs have been trending downward in the U.S. this year, Wards Intelligence data shows. Through April, the BMW i3 is down 48.2%, the Honda Clarity fell 17.4% and the Chevrolet Bolt dipped 2.8%.

Industry-watchers are debating why most BEVs are struggling. Too few BEV nameplates, inventory shortages of existing BEVs, undesirability of existing BEVs, insufficient range among existing BEVs and lack of public charging stations all have been cited as reasons the vehicles haven’t appealed to more Americans.

Range is becoming less of a concern, however. Per EPA estimates, the new Soul EV more than doubles the outgoing model’s range, going 243 miles (391 km) on a fully charged battery pack compared with 111 miles (179 km) for the ’19 model. The primary reason for the jump in range is Kia’s switch to a more energy-dense 64-kWh, liquid-cooled lithium-ion pack from a 30-kWh air-cooled pack.

Since General Motors released the Chevrolet Bolt in 2016, most new BEVs have ranges more than 200 miles (322 km), getting closer to the distance most internal-combustion-engine vehicles will travel on a full tank of gasoline.

Sister-brand Hyundai’s Kona Electric became the longest-range, non-Tesla BEV available in the U.S. when it went on sale this year, with 258 all-electric miles (415 km) miles, overtaking the 238-mile (383-km) Bolt.

The battery-electric version of the Niro arriving this month at Kia U.S. dealers has 239 miles (385 km) of range.

The Kona and the Niro also have 64-kWh Li-ion packs.

As with most non-Tesla BEVs in the U.S., sales of the Niro and Soul will be relegated to the 14 U.S. states following California’s zero-emission-vehicle rules, Cole says.