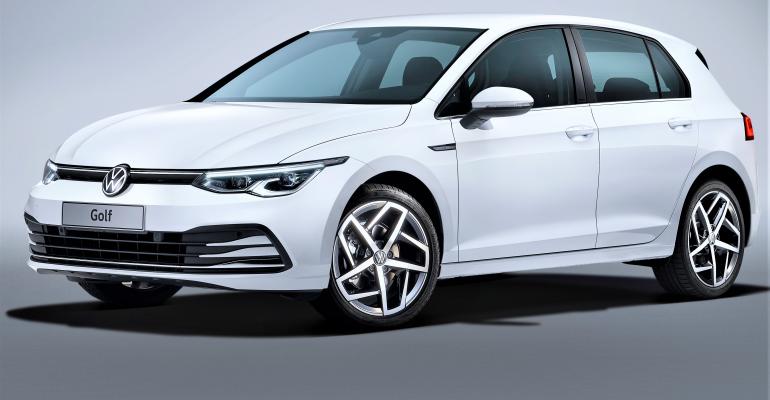 The eighth-generation Golf will feature a new range of electrified gasoline engines, a raft of new digital connectivity functions and contemporary driving aids, some of which are appearing on a Volkswagen model for the first time.

Volkswagen aims to once again revolutionize the hatchback market with its advanced eighth-generation Golf – a model the German automaker’s CEO, Herbert Diess, describes as “the right car, at the right time.”

Unveiled Thursday at VW’s headquarters in Wolfsburg, Germany, the new model will go on sale across Europe by the end of 2019 featuring a new range of electrified gasoline engines as well as a raft of new digital connectivity functions and contemporary driving aids, some of which are appearing on a Volkswagen model for the first time.

First introduced to the VW lineup in 1974 as a successor to the Beetle, the Golf has racked up global sales of more than 35 million over the past 45 years. It will see North America delivery in 2021.

The styling of the new Golf follows an evolutionary path. The revamped front end features distinctive headlamps and, reflecting the styling treatment of the new battery-electric ID. 3, a lighting strip across the leading edge of the hood that adds emphasis to a new Volkswagen badge.

The side profile has been reworked with a distinctive swage line running the length of the flanks and a more contoured C-pillar intended to give VW’s best-selling model greater structure. At the rear are wider taillamps that extend into the tailgate.

In a departure from previous generations of the VW hatchback, the new Golf will be sold exclusively as a 5-door model. A 3-door bodystyle will no longer be offered.

The electrified Golf GTE is underpinned by an updated version of its predecessor’s versatile MQB platform, featuring a MacPherson strut front and either a torsion-beam or multi-link rear suspension, depending on the engine.

The interior of the new Golf (below, left) is heavily redesigned, with a focus on digitalization. The dashboard is dominated by a 10.3-in. (26-cm) digital instrument cluster and standard 10-in. (2.5-cm) central touchscreen display for the infotainment functions. Buyers can option the new model with a head-up display for the first time.

The styling of the high-set dashboard is reminiscent of the ID. 3 BEV, with the controls positioned higher and closer to the steering wheel, giving it a cleaner look enhanced by ambient lighting. Climate and volume functions are adjusted by a so-called slider located underneath the central touchscreen display, while a similar slider system is mounted into the roof console to operate the optional sunroof.

The eighth-generation Golf also features the latest version of VW’s MIB infotainment system, which supports both touch and voice control, including the ability to link with Amazon’s Alexa speech functions.  It is permanently connected to the internet via an eSIM, enabling online music streaming and real-time traffic information among other online features.

Diess tells Wards a lot of effort has gone into ensuring the new Golf retains its reputation for class-leading quality, with emphasis placed on the materials mix of its interior.

At the same time, VW has focused heavily on upgrading its driver-assistance systems, aiming to take them to a level beyond those of the Golf’s keener rivals. The new model is offered with so-called Travel Assist, which combines adaptive cruise control and lane assist to enable what the automaker describes as “assisted driving” at speeds up to 130 mph (209 km/h).

The new Golf is the first VW model to feature Car2X (car-to-everything) technology, based on the harmonized European Union standard. It uses information from other vehicles and the road infrastructure to generate data based on local traffic conditions for additional warning measures for tailbacks and the like.

The new Golf’s eSIM allows for over-the-air software updates to both the vehicle and the infotainment system. European customers will receive a three-year subscription to VW’s We Connect Plus, which offers a range of services including media streaming, online route calculations, vehicle status, driving data, online map updates and, for the GTE, charging services information.

Another new development is a mobile key system that allows the new Golf to be opened and started via a smartphone.

The ’20 Golf’s engine lineup includes three new turbocharged gasoline-based mild hybrids that use a 48V electric-drive system in a trio of eTSI-badged models and a revised gasoline-electric plug-in hybrid drivetrain offering two different states of tune in a pair of GTE-based models. 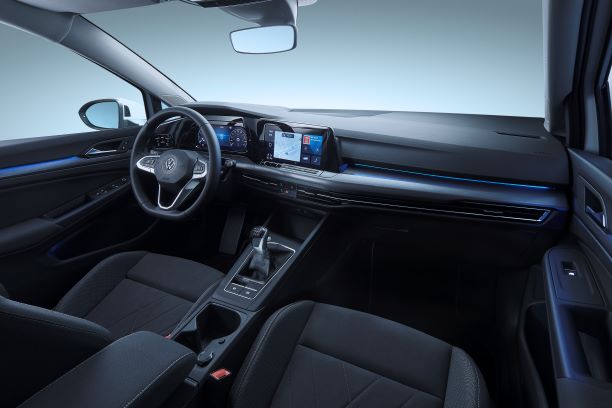 The mild-hybrid eTSI units start with a 1.0L gasoline 3-cyl. developing 89 hp and extended to a larger 1.5L gasoline 4-cyl. with 129 hp and 148 hp, all claimed to boast a 10% improvement in fuel economy over the non-electrified drivetrains they replace through new functions such as engine-off coasting.

The plug-in hybrid drivetrains combine Volkswagen’s 1.5L gasoline 4-cyl. with a gearbox-mounted electric motor offering 148 hp in its mildest form in the entry-level GTE and 241 hp in a new, performance-based GTE model. Both use a 13-kWh lithium-ion battery claimed to provide a 50% increase in electric range at over 37 miles (60 km) on the WLTP test cycle.

Despite the widespread electrification measures, VW is not abandoning diesel engines in its best- selling model just yet. Included in the launch range for the eighth-generation Golf in European markets is a 2.0L TDI 4-cyl. with 113 hp and 148 hp.

Within the next 12 months, VW plans to launch new GTi, GTD and R variants of the new Golf  – the latter of which is expected to run a new mild-hybrid version of its predecessor’s turbocharged 2.0L gasoline 4-cyl. developing over 300 hp.