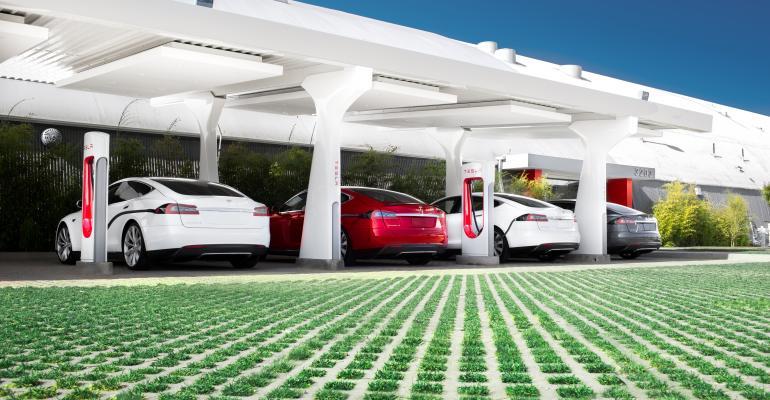 Imitating gas stations is no way to create an EV charging infrastructure. There are startups with better ideas.

Lack of a recharging infrastructure that’s equivalent to gas stations is one of the biggest roadblocks to faster adoption of electric vehicles. Or is it?

Putting recharging stations on every block and every few miles of expressway is indeed a complicated and hugely expensive proposition. But the question no one is asking is: “Why are we trying to imitate gas stations?”

Nobody enjoys going to a gas station. It’s a chore, especially in bad weather. The only good thing about it is it doesn’t take long (if it isn’t crowded) and the typical driver only must go there once a week.

The new EV model calls for fast-charging stations that are expensive and take 20 minutes for a partial charge. There is the potential for long lines during peak periods.

Why are we pouring billions into an all-new fast-charging infrastructure that promises to deliver a worse user experience than the not-so-great infrastructure it is making obsolete?

The idea of replenishing energy in vehicles is ripe for innovation. The Apple iPhone didn’t change the world because it was a better cell phone. It changed the role the cell phone plays in our lives by the way we use it, with innovations such as the Siri virtual assistant.

If EV charging can be turned into a user experience that makes our lives better and more fun, it will be a lot easier to sell electric cars.

The term “user experience” can be traced back to the 1990s when it first was used to describe “human interface research.” Later it became associated with the design of consumer electronics such as smartphones and iPads, and then it was adopted in automotive as car interiors started to mirror consumer electronics.

With vehicles now becoming part of the Internet of Things, the UX concept has been expanded further, with automakers and suppliers such as Harman talking about “experiences per mile.” The goal is to make 100% of those experiences positive ones.

Keeping in mind the growing importance of UX in automotive, we dedicated a segment of the recent Wards Intelligence Focus: Electrification Conference, to a discussion of how to turn vehicle charging into a user experience that attracts EV buyers instead of discouraging them.

As moderator, I mentioned a big reason I switched to an electric snowblower was because it improved my life by eliminating the hassle of filling the thing with gas, even though I only did it a few times a year.

The panel, comprised of two start-up companies and a representative from DTE Energy, a major Detroit-based diversified energy company, made it clear there are alternatives.

Both startups touted low-cost charging devices that can be placed just about anywhere, from city curbs and public parking lots to private homes. And they both can eliminate the issues people have with current EV chargers.

We discovered these two startups, Wattpark and Gulplug, when they were visiting the U.S. earlier this year as part of a delegation sponsored by Ubimobility, a French technology accelerator that finds the most promising automotive tech startups in France and introduces them to automakers and suppliers in Detroit and Silicon Valley.

Over two weeks, the companies are given the chance to forge connections and build relationships with automakers, Tier 1 suppliers, potential investors, universities and other stakeholders.

Wattpark is pitching a concept for small $600 internet-connected chargers that can be purchased by anyone and placed just about anywhere. Customers find the charger with a free phone app and reserve a time to charge, eliminating ugly moments when EV drivers hunt down a charging station only to find it occupied.

Marc LePage, president and CTO of Wattpark, has a one-sentence description for his business model: “Wattpark is like Airbnb for EV charging stations.”

In a typical scenario, the owner of the charging point takes 90% of the commission on the electricity sale and Wattpark takes 10%.

It’s easy and convenient for users and a nice way for small businesses to make a buck. Learn more about Wattpark here

Gulplug is a French startup that has invented a robotic charging system. Antoine Gratian, international business developer for Gulplug, explains that charging EVs can be a pain point because they usually are charged every day while gasoline-powered vehicles are fueled just once a week.

Even when done at home, daily charging frequently involves holding dirty charging cables or being exposed to bad weather.

Wireless induction charging can eliminate this annoyance, but it is an inefficient way to transmit energy and poses potential hazards, Gratian says.

Gulplug’s solution is a pie-plate like robot connected to an electrical cord that automatically rolls under vehicles and signals a magnetic connector in the vehicle undercarriage to drop down and plug in. See a video of how it works here.

It’s an amazingly simple and low-cost way to plug in. Gratian says the device is waterproof and can’t be damaged by salt and snow. Renault and autonomous vehicle producer Navya are among Gulplug’s customers. 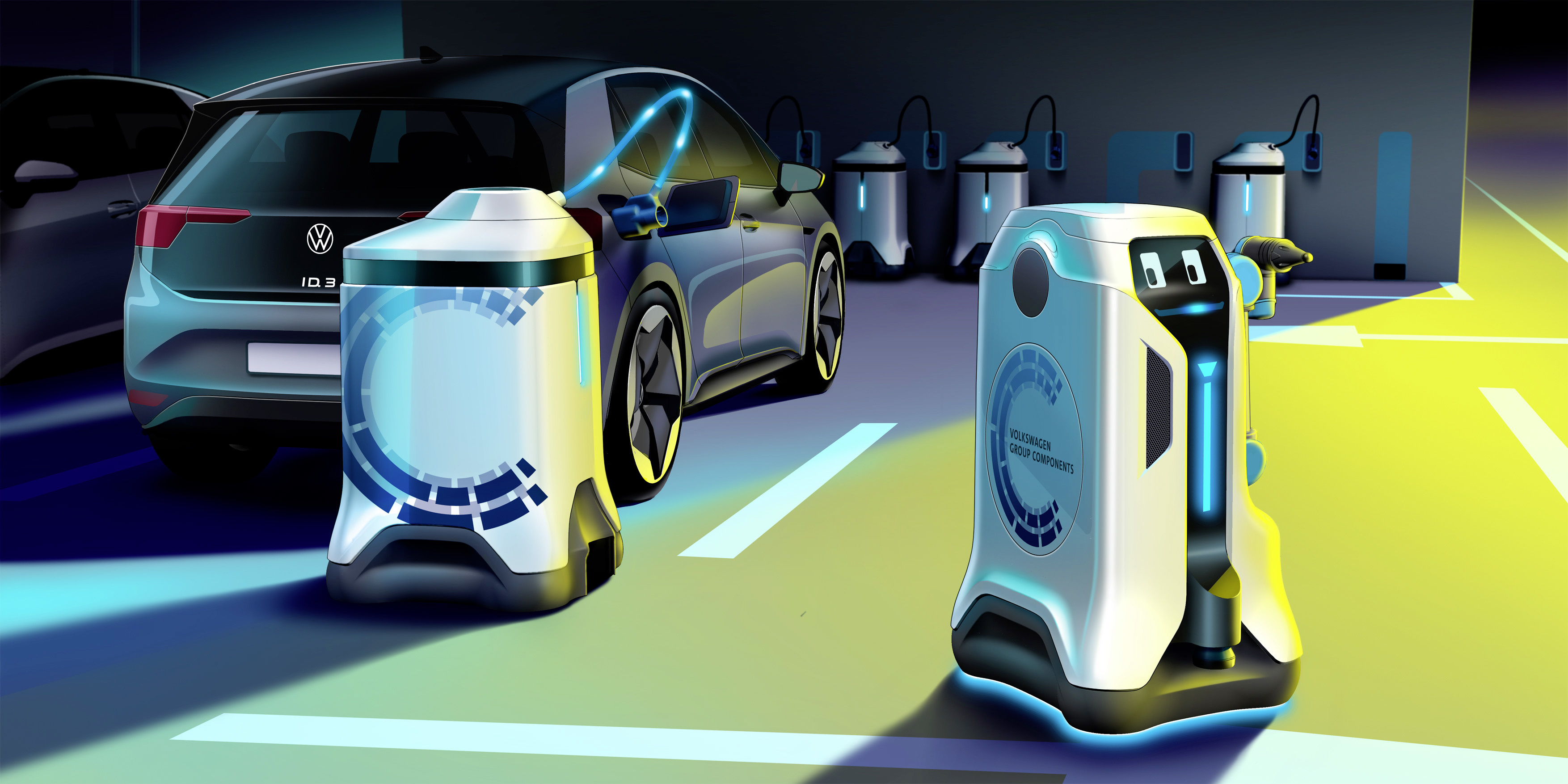 And now Volkswagen has just announced a concept that uses connected robots that can roam freely around parking garages to charge vehicles.

"The mobile charging robot will spark a revolution when it comes to charging in different parking facilities, such as multi-story car parks, parking spaces and underground car parks because we bring the charging infrastructure to the car and not the other way around. With this, we are making almost every car park electric, without any complex individual infrastructural measures,” says Mark Möller, Head of Development at Volkswagen Group Components.

DTE and other utilities are doing a lot to lower costs and barriers to expanding a user-friendly charging infrastructure, but the industry must find ways to make electric vehicles attractive to more just than Tesla fans.

Tesla made EVs cool. Now suppliers and automakers must make EV charging cool. Startups like Wattpark and Gulplug and automakers like VW are on the right track. Tesla, its your move. 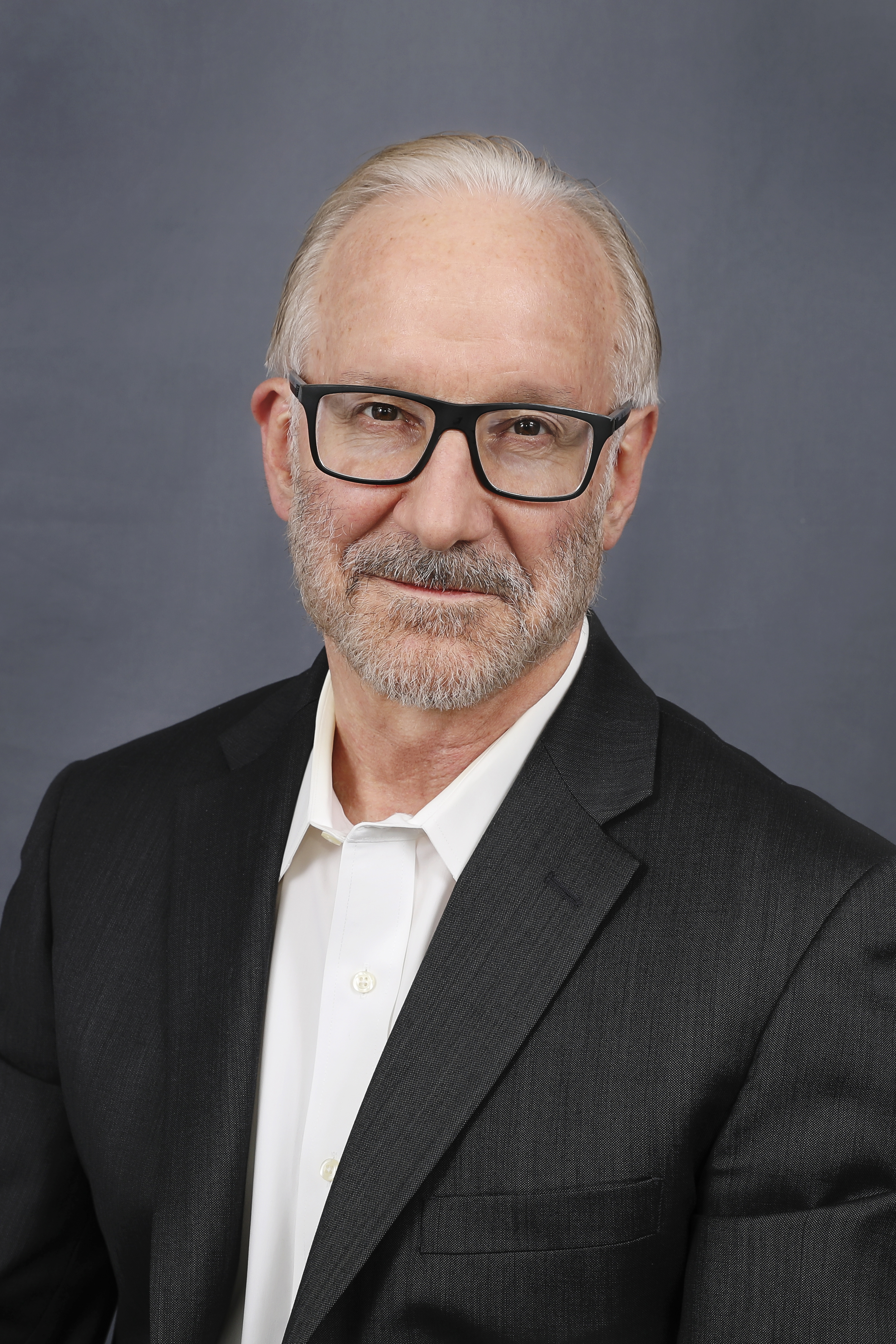 Drew Winter is an analyst at Wards Intelligence specializing in automotive connectivity and user experience topics.