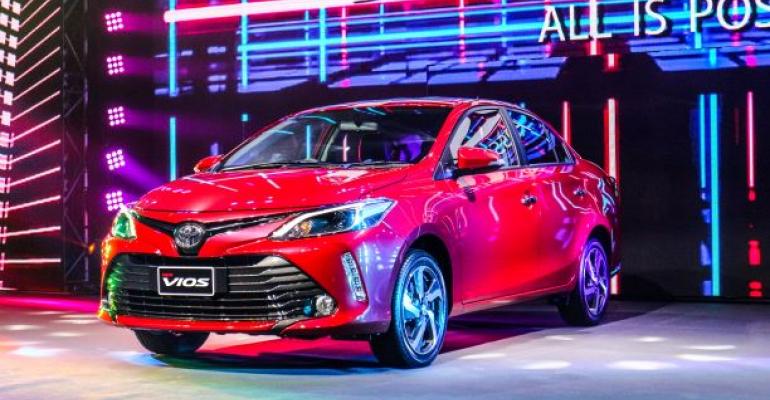 Toyota Thailand may build PHEV or EV at Gateway plant where Vios is assembled.
Engines>Alternative Propulsion

Toyota doesn’t see the Thai market as being ready for battery-electric vehicles because of the scarcity of charging stations. The automaker for now is focusing on plug-in hybrids, which are being offered government incentives albeit at a lower rate than BEVs.

Toyota Thailand announces it has submitted two applications to the government to build plug-in hybrid and battery-electric models and take advantage of generous incentives.

The automaker also says total 2018 vehicle sales for Thailand surpassed 1 million while forecasting sales will be similar this year. Toyota itself aims to narrowly beat the market, but countering those gains will be another, bigger drop in its exports of completely built-up units.

Toyota is among the OEMs to join the Board of Investment’s new tax incentive scheme to locally produce energy-efficient vehicles. Its two submissions cover production of PHEVs and BEVs.

Toyota isn’t saying what it will build under the applications. Chatchai Taveesakulvadchara, executive vice president, says that decision will be made during the three-year window for launching production.

PHEV/BEV production almost certainly will be at Toyota’s Gateway car plant in Chachoengsao province, which has room to expand, Taveesakulvadchara says.

Toyota, however, has made it clear it doesn’t see the Thai market as being ready for battery-electrics, with Taveesakulvadchara citing the scarcity of charging stations and charging time. The automaker for now is focusing on PHEVs, which are being offered government incentives albeit at a lower rate than pure BEVs.

“We will start this year with reuse and recycle… rebuild (will come) next year,” says Taveesakulvadchara. The project, which will be announced in the second half of this year, is to be located at the Gateway facility.

That will go hand in hand with the localization of battery production, which was one of the components of its hybrid application to the BOI. “This (localization) can help reduce battery import (requirements) and our customers’ cost of ownership of our hybrid EVs,” Toyota Thailand President Michinobu Sugata says.

Battery production is to start in May at Gateway with an initial annual capacity of 70,000 batteries. Output likely will reach six figures within the short term as Toyota seeks greater economies of scale so it can bring local suppliers into the process.

Getting the new battery line on stream is an urgent priority for Toyota, and it has been pushed up nearly a year. This is because the nickel-metal-hydride batteries that are best suited to the humid Southeast Asia climate are produced only at three facilities in Japan, all of which are hard-pressed to absorb new demand.

Sugata, meanwhile, says 2018 sales were better than expected for Toyota, which accounts for more than 40% of the light vehicles sold in Thailand. After slipping for several years, deliveries were up 31.2% to 315,113 units.

The overall Thai market also bounced back with 1,039,158 light-vehicle deliveries, a 19% jump. It was only the third time LV volume in the country topped 1 million, according to Toyota, which tabulates sales figures for the industry.