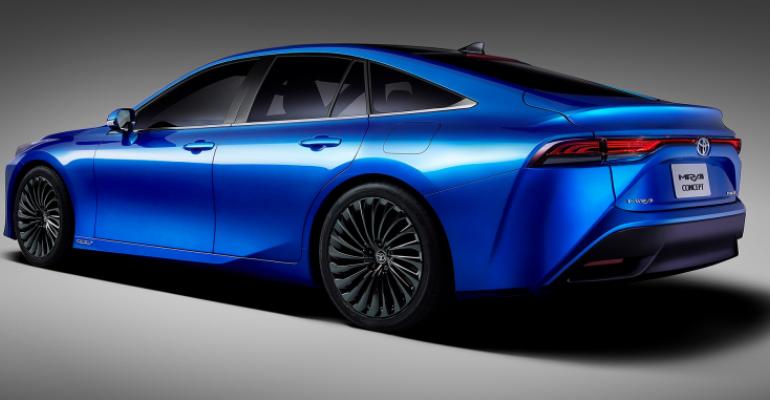 GREENSBORO, NC – Toyota’s second-generation Mirai fuel-cell electric vehicle should have roughly 30% longer range than the model it is replacing.

The automaker divulges that detail and a few others at an event here this week, in advance of the vehicle’s Tokyo Motor Show unveiling in two weeks and its Los Angeles auto show appearance in November.

Perhaps the bigger news with the new FCEV is its move to a rear-wheel-drive platform, enabling it to morph into a lower, wider, longer and more stylish vehicle than the quirky-looking front-wheel-drive sedan it replaces. It also adds a fifth seating position, something the current Mirai lacks.

The vehicle has other elements that push it further into upscale territory, such as a 12.3-in. (31-cm) touchscreen, the same size infotainment display as in most new Lexus vehicles; the platform is shared with Lexus as well, according to forecast data from Wards Intelligence partner LMC Automotive. 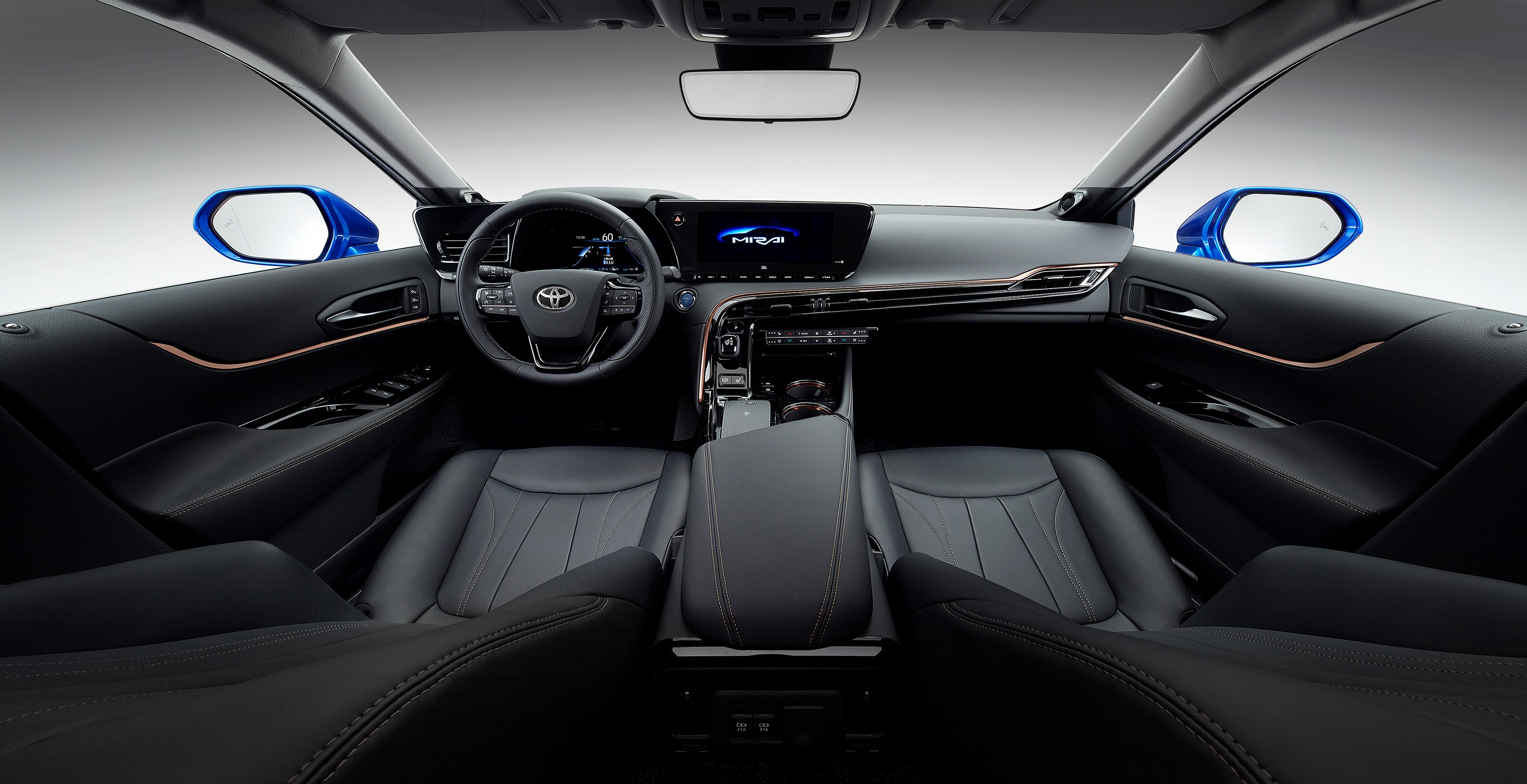 The current Mirai, although priced at nearly $60,000, lacks many premium features, a deficiency called out by Wards and other reviewers upon driving the car in 2015.

Because of the still-high cost associated with the fuel-cell stack, he says Toyota needs to stretch the price point to cover its costs.

When asked by Wards if the automaker is targeting Tesla battery-electric-vehicle owners with the Mirai, Murtha says: “If you want to play at a higher price point, you need to put in some of the creature comforts that customers shopping other vehicles at that price point are looking for.”

With a year until its arrival, Murtha tells Wards he is unsure if Toyota will price the new Mirai higher than the current generation, which retails for $59,430 for ’19 or leases for $389 a month.

Making the Mirai a Toyota, and not a Lexus, was a corporate decision, he says, due to the intention to market the vehicle globally. However, as Lexus is sold in most major countries, including the U.S. and Toyota’s home country of Japan, it’s unclear whether designating it a Lexus and not a Toyota would limit sales.

The fact the Mirai has remained a sedan and not morphed into a crossover also was a corporate decision driven by global demands (story continues below image). 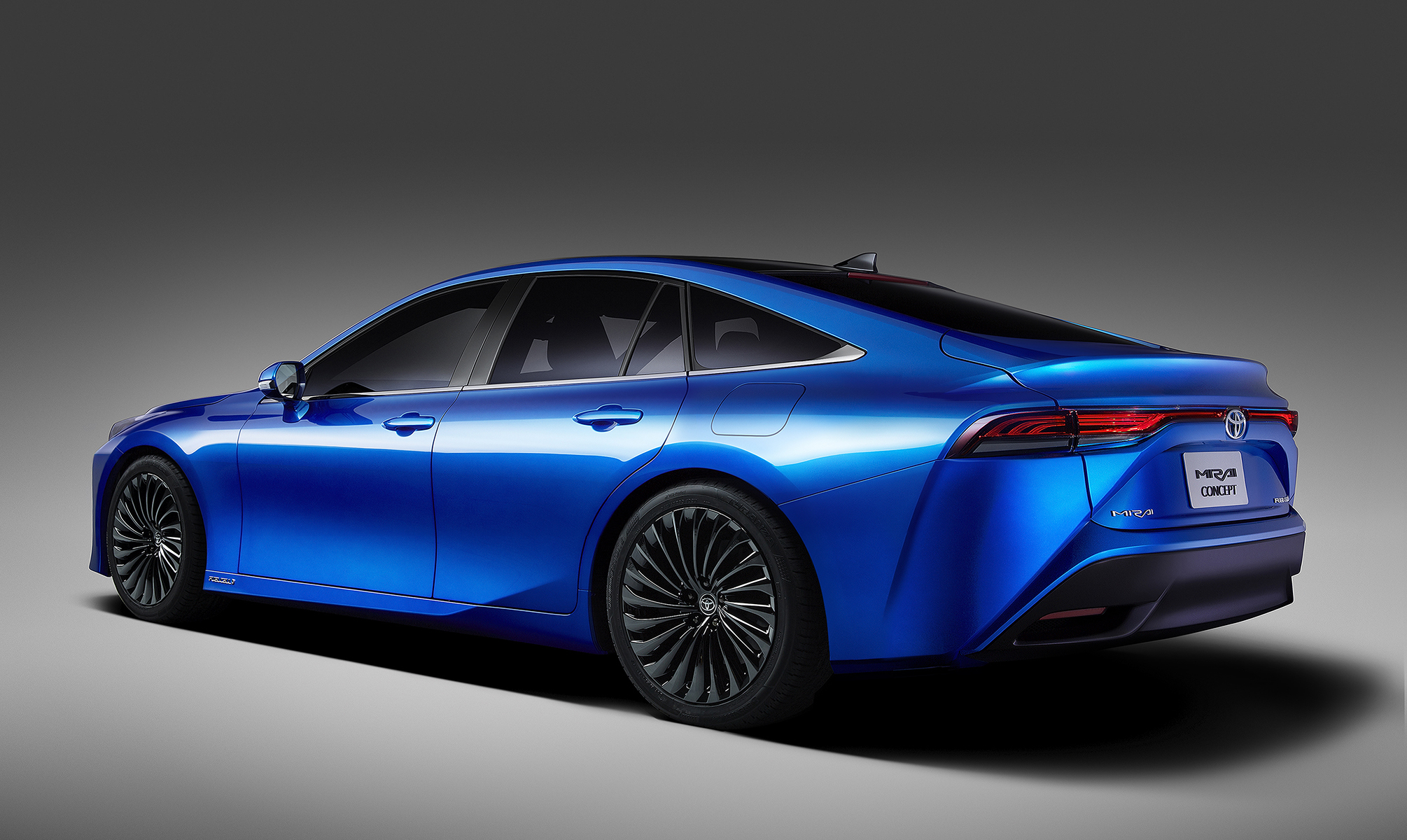 “If we were kings and queens it would be, but we have to play nice with our friends in other markets,” Murtha says, adding to meet the needs of China, Japan and Europe, the scales for the Mirai tipped in the sedan direction. “We’re going to make hay with that, but we’re at the table for our utility vehicle as soon as (the automaker) gets one.”

Toyota plans to trickle out U.S. specifications for the vehicle up until its late 2020 launch (including at November’s L.A. show), but it is saying improved fuel-cell system performance and greater hydrogen storage capacity enabled the longer range.

The current Mirai has two tanks, together holding roughly 122L of hydrogen at 70 MPa (10,000 psi). It is unclear if this same setup is in the new car, although a spokesman says the carbon-fiber tank construction of the new Mirai is “roughly going to be the same. The advancements we’ve made are just in the speed we can make the tanks.”

Jackie Birdsall, senior engineer-Fuel Cell Hybrid Vehicle Group for Toyota Motor North America R&D, tells media the automaker “is scaling up to a tenfold increase” in Mirai production at its Motomachi, Japan, plant, so production will become even more automated than the comparatively hand-built first-gen models.

“We’ve done some really great advancements in the manufacturability of the fuel-cell stacks and the tanks themselves,” she says.

Toyota is building 3,000 first-gen Mirai units per year, so with more of an assembly-line process the automaker hopes to achieve 30,000 annual builds.

Despite its larger physical size – its 195.8-in. (4,973-mm) length places it between the Lexus LC coupe and Lexus LS sedan (allriding on Toyota’s TNGA front-engine, RWD platform)) – Birdsall says Toyota is targeting an increase in the Mirai’s EPA-estimated fuel economy. The ’19 model is rated at 67 mpg (3.6 L/100 km) both in the city and on the highway.

The current Mirai is limited to sale or lease in select areas of Hawaii and California, the latter the only U.S. state with relatively robust hydrogen refueling infrastructure.

Toyota officials make clear the slow pace of station openings has been a pain point as the automaker has been working on fuel-cell technology for more than 20 years and still hopes to make FCEVs a viable alternative to gasoline-powered internal-combustion-engine vehicles in the future. It has gone so far as to loan money to hydrogen-infrastructure firms and is building a hydrogen-generation plant at the Port of Long Beach near Los Angeles, for commercial and personal-use FCEV refueling. Toyota believes FCEVs “will one day be as common as our hybrid-electric vehicles,” Birdsall says.

“Since our target currently is urban areas, footprint becomes a constraint, and we want to co-locate with gasoline dispensers for the convenience of our customers,” she says, adding 10 million metric tons of hydrogen is produced in the U.S. every year, but distributing it can become a problem. That’s one reason why hydrogen-refueling stations in California are selling it for roughly $7 a gallon (today Toyota subsidizes hydrogen for Mirai owners, up to $15,000).

In the entire U.S., 46 publicly accessible retail hydrogen refueling stations are open, although five are non-retail, says the U.S. Department of Energy’s Alternative Fueling Station Locator. The stations open outside California are in Connecticut, Massachusetts, Michigan, South Carolina and Hawaii. Toyota last year began selling the Mirai in Hawaii, where a station is open in Honolulu.

Murtha says station rollout in the Northeast, where Toyota hoped to have been selling the current-gen Mirai by late 2017, is nearly at a halt due to regulatory problems. He has no introduction date to give for the car in the region.

“We’ve got very active discussions with Massachusetts and they’re close to approving,” he says. “Connecticut’s been a pretty positive player. To be honest, we’ve run into some bridges-and-tunnels issues. Some legacy laws related to backyard liquid-natural-gas conversions are still on the books and kind of snare hydrogen. So until we can get those laws changed, nobody wants to buy a car in New York that you can’t drive through a tunnel or over a bridge.”

When the first-generation Mirai debuted in November 2014, Toyota announced partnerships with Air Liquide on the Northeastern U.S. stations. Twelve were planned, but it appears neither the operating Massachusetts or Connecticut stations are theirs.

Wards Intelligence data shows Toyota has sold 5,893 Mirais in the U.S. since 2015. By comparison, it has retailed 62,881 RAV4 hybrids this year alone.

Toyota officials here say the vast majority of Mirais are leased, and most are not driven by Toyota or Toyota-affiliated persons. Murtha also says there is no real fleet business for the vehicle.

In June, Green Car Reports noted more than $20,000 in incentives was available on the vehicle.

The Japanese automaker continues to strongly advocate for hybrids, as it marches toward a plan to have an electrified variant of every model in its lineup by 2025.

It announces here a RAV4 plug-in hybrid debuting at the L.A. auto show. Due next year, it joins the Prius Prime as the only other PHEV in Toyota’s U.S. lineup. Toyota also retails six traditional, non-plug-in hybrids including the Prius liftback and hybrid versions of the Avalon, Camry, Corolla, RAV4 and Highlander. Its Lexus luxury brand also sells hybrid variants of most of its models.

Toyota sees PHEVs as a bridge from hybrids to BEVs, which make up just 1% of total U.S. light-vehicle sales and continue to be shunned by many consumers for a variety of reasons including cost, charging and battery-replacement concerns

Yet, slated to arrive by 2025 is a BEV, which Murtha once again confirms Toyota is bringing to the U.S., but not until after China gets its model.

Wards Intelligence forecasting partner LMC shows an all-electric Prius is due in the U.S. next year as a ’21 model.