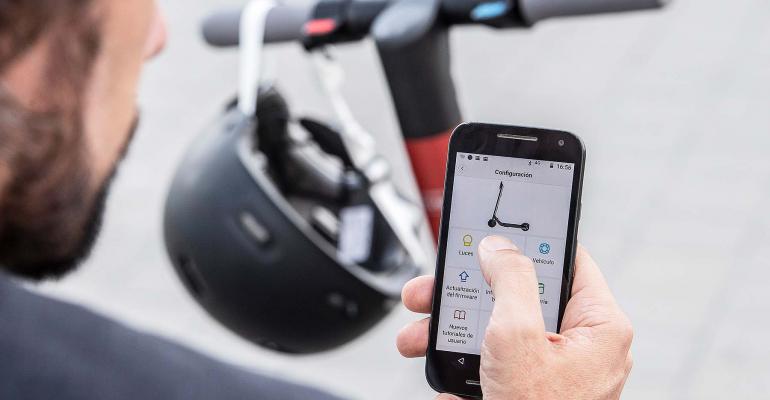 The electric eXS will be presented Nov. 13 at the Smart City Expo World Congress in Barcelona.

Spanish automaker SEAT takes its first step with its micromobility strategy as it prepares to debut its new eXS KickScooter at the Smart City Expo World Congress in Barcelona.

The electric eXS powered by Segway will be presented Nov. 13, with visitors able to take it for a test run. SEAT, meanwhile, will be looking for Spanish cities to implement an eXS sharing pilot test.

As part of its Easy Mobility strategy, SEAT says its goal is to build its product and service portfolio by presenting new solutions to the market in the framework of urban mobility.

Product marketing director Lucas Casasnovas says that within the Volkswagen Group’s micromobility strategy, each brand plans to launch its own urban mobility solutions.

“We aim to make SEAT a benchmark in micromobility,” Casasnovas says in a statement. “In this sense our aim is to ensure that everyone who lives in an urban setting is familiar with the options offered by SEAT for getting around the city in an economical, sustainable, agile and fun way.”

Casasnovas says the high technology, efficiency and sustainability of Segway’s products were the key factors for implementing the partnership.

SEAT says it designed the eXS exclusively and features Segway’s electric technology built into the platform of its ES2 model.

“The scooter is able to reach places that are difficult for cars to access,” the automaker says. “Its large 8-in.-diameter wheels make it is easy to ride, and its front and rear suspensions give it smooth handling. The battery and engine combination allows it to travel up to 25 km/h (15.6 mph).”

The eXS is equipped with front and rear LED lights, customizable ambient light, an LCD screen, cruise control and an anti-theft deterrent. An additional battery can be connected to increase its range, which reaches a maximum of 28 miles (45 km), depending on conditions.

SEAT says the eXS can be purchased for €599 ($679) at all of the brand’s dealers beginning in December.

It will be available in Spain, France, Germany, Austria, Switzerland and Portugal before the end of the year, and in the rest of Europe in 2019.

SEAT is looking for Spanish cities to implement a pilot test with a fleet of eXS scooters that is open to the public. The recently created independent SEAT Group company XMOBA will be responsible for carrying out the tests looking at the eXS’s potential for improving mobility in urban centers.

SEAT has established schedules to begin pilot tests of the eXS within the company, including an eXS sharing program for employees to get around the Martorell factory.