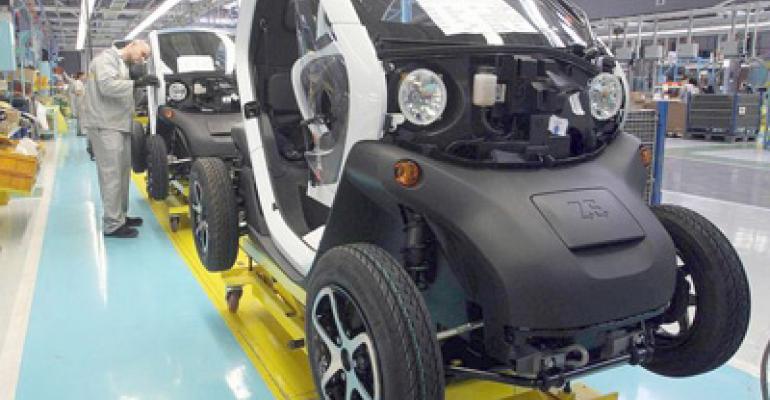 The Twizy, with two seats – one behind the other – was launched in 2012 and never fulfilled sales forecasts. Currently, only 33 people are employed in Twizy production.

MADRID – Renault Spain will assemble battery packs for its Captur and Megane plug-in hybrid vehicles at its Valladolid, Spain, plant after transferring assembly of the A-segment Twizy electric vehicle to the Renault Samsung factory in Busan, South Korea.

The Captur and Megane are to reach the market in 2020.

The Twizy, with two seats – one behind the other – was launched in 2012 and never fulfilled sales forecasts.

Currently, only 33 people are employed in Twizy production. Battery-pack production at Valladolid initially will need 70 workers.

Renault Spain assembled an average 3,800 units of the EV yearly from 2012-2017. The automaker has blamed the lack of adequate charging infrastructure for the Twizy’s poor sales, but some analysts believe the car simply has fallen short of user expectations.

About 60% of Twizy production customarily has been exported, but in recent months 90% of the Spain-built cars have gone to South Korea, which has nearly 39,000 charging points, eight times as many as Spain.

Renault considered transferring Twizy production to South Korea four years ago, but the project was delayed as the model was not approved by South Korean authorities.

The Captur and Megane plug-in hybrids will have an electric-only range of 30 miles (50 km).

Jose V. de los Mozos, deputy executive vice president-manufacturing and supply chain for the Renault-Nissan-Mitsubishi Alliance, has said the Renault plants in Valladolid and Palencia will assemble the new PHEVs at least until 2025.