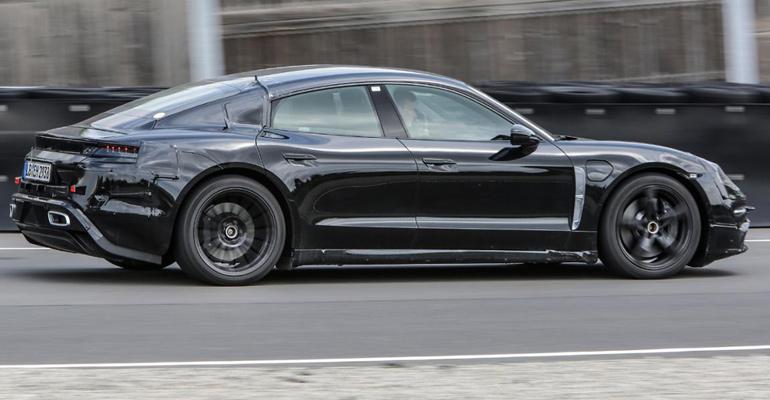 The Taycan marks a radical departure from Porsche’s traditional lineup, combining zero emissions with the promise of what lead engineer Stefan Weckbach describes as a typical Porsche driving experience.

ZUFFENHAUSEN, Germany – The countdown to the launch of the electric-powered Porsche Taycan begins in earnest with officials confirming the new 4-door sedan has entered the second phase of prototype production at the automaker’s headquarters on the outskirts of Stuttgart.

The first in an extended lineup of EVs being developed in a program budgeted at up to $6.9 billion through 2022, the Taycan marks a radical departure from Porsche’s traditional lineup, combining zero emissions with the promise of what lead engineer Stefan Weckbach describes as a typical Porsche driving experience.

When it goes on sale in the U.S. following a planned public premiere at the Frankfurt auto show in September 2019, it will be positioned between the $65,700 Cayenne and $85,000 Panamera in a prelude to the introduction of further battery-powered models. These include a sports car in the mold of the existing Boxster and Cayman and an SUV similar in size to the recently facelifted Macan, Porsche says.

Wards confirms the Taycan will be offered in two variants – the standard sedan depicted here in prototype guise planned for delivery in China by mid-2020, and a more ruggedly styled, high-riding CUV (below, left) hinted at by the Mission E Cross Turismo concept revealed earlier this year at the Geneva auto show and due in North American showrooms in 2022.

Key rivals for the new Porsche include the Tesla Model S, a car used as a benchmark during the early phases of the Taycan’s development. However, Weckbach acknowledges the Taycan also will compete against other upcoming EVs, including sister company Audi’s e-Tron GT and the Mercedes-Benz EQ S.

As evidenced by the latest prototypes fitted with production-based bodywork, the Taycan’s styling draws heavily on the well-received Mission E concept first shown at the 2015 Frankfurt auto show. Although every detail and body panel has been altered on the way to production, it remains remarkably faithful in appearance and overall visual character to the earlier concept, whose design is credited to Porsche’s former head of exterior design Mitja Borkert, now head of design at Volkswagen sister company Lamborghini.

One major departure from the earlier Mission E is the adoption of sturdy B-pillars and four front-hinged doors designed to increase body rigidity. At the rear, the Taycan receives a short notchback-style trunklid providing access to one of two luggage compartments; the other, sited up front, is claimed to boast capacity of nearly 3.5 cu.-ft. (100 L).

The initial sedan and CUV are just two body styles created for the Taycan. Others not yet revealed to the public include a 2-door coupe and a cabriolet, which Porsche insiders say could be added later to the lineup.

The basis for the Taycan is the so-called J1 platform – a high-strength steel, aluminum and carbon-fiber structure designed to house battery modules of varying sizes as low as possible within the confines of a long wheelbase.

The new platform has been conceived exclusively as a dedicated EV architecture, with Weckbach confirming it does not accept a combustion engine. It does, however, form the basis of a more versatile structure being developed in an engineering program between Porsche and Audi called the Premium Platform Electric.

The interior of the Taycan is described as providing a typical Porsche 911-style driving position up front with adequate seating for two in the rear.

The new sedan is powered by an electric drivetrain with a permanent magnet synchronous motor housed within each axle, giving it all-wheel-drive capability. Porsche chose synchronous motors against the asynchronous motors favored by Audi for their ability to provide strong sustained performance at high energy-density levels.

In a move aimed at imbuing the Taycan with the rear-biased handling traits that have characterized Porsche models through the years, the two electric motors feature varying outputs, with the rear unit being more powerful than the one up front. Torque vectoring on both axles also regulates the amount of drive sent to each individual wheel.

A rear-wheel-drive version of the electric-powered Porsche, featuring a single electric motor on the rear axle, is undergoing production as part of a planned 200-strong fleet of prototypes and preproduction examples of the new sedan. Porsche officials indicate it will be offered from the start of sales as part of a multi-tiered lineup similar to that of other Porsche models.

Drive is channeled through a 2-speed gearbox; most rival EVs use single-speed gearboxes. It was chosen for its ability to provide a second gear for sustained high-speed performance, which the automaker considers crucial if the Taycan is to attract typical Porsche customers.

Porsche plans to offer the Taycan with several different power outputs. Nothing is official, but Wards has learned variants making 402 hp, 469 hp, 536 hp and 603 hp are being developed.

In top-of-the-line all-wheel-drive 603-hp guise, the new Porsche is expected to eclipse the 0-62 mph (100 km/h) time of 3.5 seconds announced at the unveiling of the Mission E, placing the Taycan’s outright accelerative ability on par with that of the 911 Turbo.

The electric motors are powered by a battery using cells supplied by Korean specialist LG. The lithium-ion unit’s capacity is not yet revealed, though Porsche is sticking to earlier claims that the Taycan’s range will be up to 310 miles (499 km).

The Taycan’s 800V charging system fulfills Porsche’s pledge that its first electric-powered model not only will be fast to drive but also fast to recharge.

“With the 800V technology, it can be recharged in just over 15 minutes for a range of around 400 km (249 miles), so it only takes about half as long compared to today's systems,” Weckbach says.

The new 4-door is expected to tip the scales at over 4,400 lbs. (2,000 kg). Even so, Porsche believes the Taycan will bring lofty new dynamic qualities to the EV ranks. 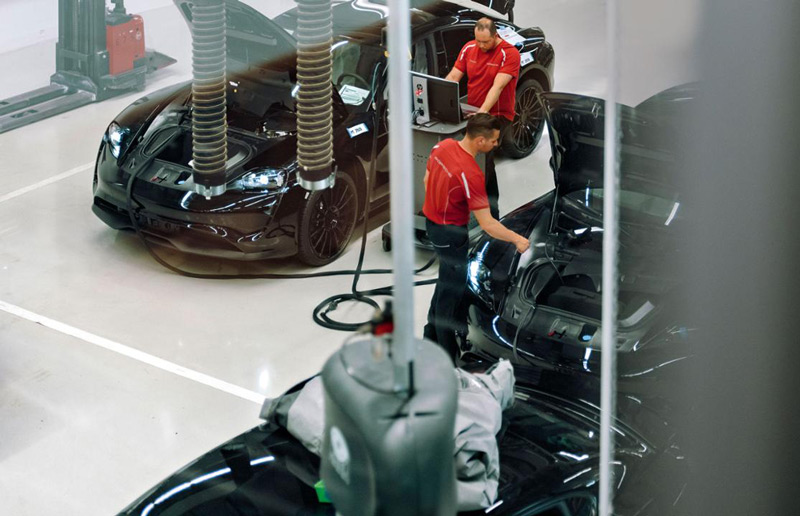 “The underfloor battery gives the Taycan a very low center of gravity, even lower than with the 911. It drives like a Porsche, looks like a Porsche and feels like a Porsche; it just happens to have a different type of drive,” Weckbach says, adding the new sedan boasts 50:50 front-to-rear weight distribution.

In a development imported from Porsche’s more recent combustion-engine models, the Taycan will use 4-wheel steering as a means of balancing low-speed maneuverability around town and high-speed stability on the open road.

“We’ve been testing the prototypes for quite a while now,” Weckbach says. “The very first vehicles, in an early phase of development, were already showing the driving characteristics you’d expect of a Porsche. They felt right at home from the beginning. And a lot has happened since then.”

Porsche confirms production capacity for the Taycan is set for between 20,000 and 25,000 units per year on a 2-shift basis on a dedicated line at its plant here (above, left), though it says volumes could be significantly increased if demand warrants it.