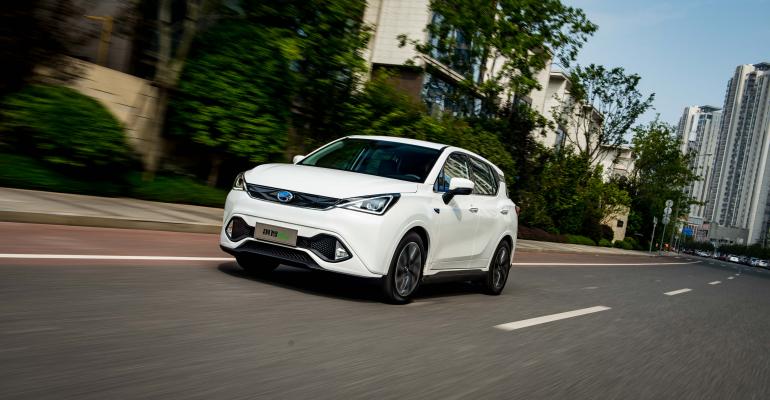 The joint venture between Mitsubishi and Guangzhou Automobile designed the new EV and is building it in Changsha, Hunan province.

GAC says 12 key cities will serve as the initial release areas for the Eupheme EV, including Beijing, Changsha, Guangzhou, Shenzhen, Hangzhou and Tianjin, with additional locations being introduced across China soon.

“It demonstrates the critical role that EV technology will play in meeting Chinese consumers’ needs and contributes to the automotive industry in China,” Masuko says in a statement.

By 2019, Mitsubishi aims to have further strengthened its operations across China, more than doubling both sales and its dealer network compared with 2016 levels. The Japanese automaker also is looking to expand its vehicle lineup of all-wheel-drive and plug-in hybrid SUVs in the country.

Meantime, GAC has begun production of 4B4 and 4J1 engines and held a groundbreaking ceremony for a R&D center to open in 2020.

The new engine plant has an annual production capacity of 200,000 units. It will produce the new 1.5L direct-injection turbocharged 4B4 gasoline engine for the Mitsubishi Eclipse Cross SUV. It also will build the 4J1 engine for the locally produced Mitsubishi Outlander SUV.