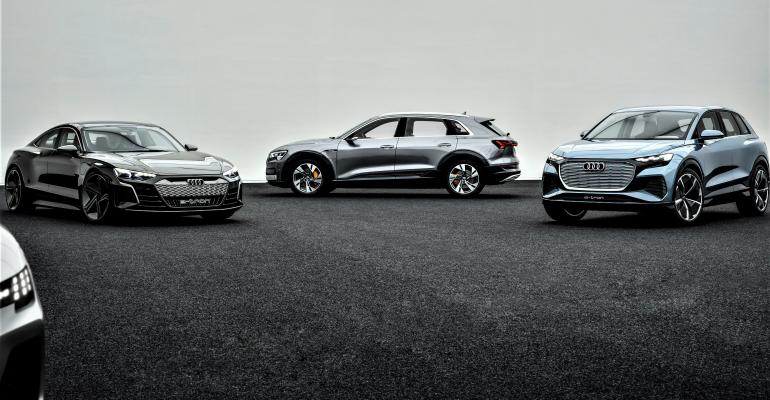 First Audi model based on new EV architecture will resemble A7 Sportback.
Vehicles>Powertrain

Designed to rival the Tesla Model S, Audi’s fifth electric model is described as being similar in size to the A7 Sportback.

Audi confirms its first model to be based on the new Premium Platform Electric (PPE) architecture, a dedicated electric-vehicle platform being co-developed with Porsche, which will be an A7 Sportback-sized coupe-like 5-door liftback.

The German automaker previews the new model, planned to go on sale in North America in 2022, in a series of images issued at a media workshop showcasing its EV strategy, which includes the launch of up to 20 electric-powered models on four different platforms by 2025.

Designed to rival the Tesla Model S, Audi’s fifth electric model is described as being similar in size to the A7 Sportback. It also features a silhouette similar to that of its combustion-engine stablemate, with a long sweeping hood, curved roofline and gently sloping liftback.

Audi describes the styling model of the new car, which goes under the internal codename AU513/4, as one of several proposals. Although the automaker won’t confirm which form will reach production, officials tell Wards it is intended to be a statement on the design lineage of future Audi EVs.

The PPE platform that will underpin Audi’s upmarket EV models has been conceived to provide both low and high ride height and is planned for application in a range of luxury models within the Volkswagen Group’s global lineup. As well as being used by Audi and Porsche, it is expected to form the basis of future electric-powered models from Lamborghini and Bentley.

A development of the existing J1 architecture used by the Porsche Taycan and its sister model, the upcoming Audi e-tron GT, the new platform is described as being “significantly modular” with a variable wheelbase and different track widths.

The PPE is designed for a standard rear-mounted electric motor, though it also can accommodate a second electric motor mounted at the front for all-wheel-drive capability in higher-powered models. It also accepts four-wheel steering, a function Audi says is not likely for the VW Group’s lower-cost MEB (Modularen Elektrik Baukasten) architecture.

As with the existing J1 platform, Audi says the PPE uses an 800V system and can be configured for 350kW charging. It has been engineered to accept a variety of different battery capacities, the largest of which is claimed to offer a range of more than 300 miles (483 km).

When the AU513/4 reaches production in 2022, Audi says it will have five all-electric models based on four different EV platforms.

The first, the e-tron quattro, is based on the modified MLB Evo platform already used by a range of more conventional combustion-engine models. It will be followed by the sportier e-tron quattro Sportback, which uses the same technical basis and will be revealed at the upcoming 2019 Los Angeles auto show.