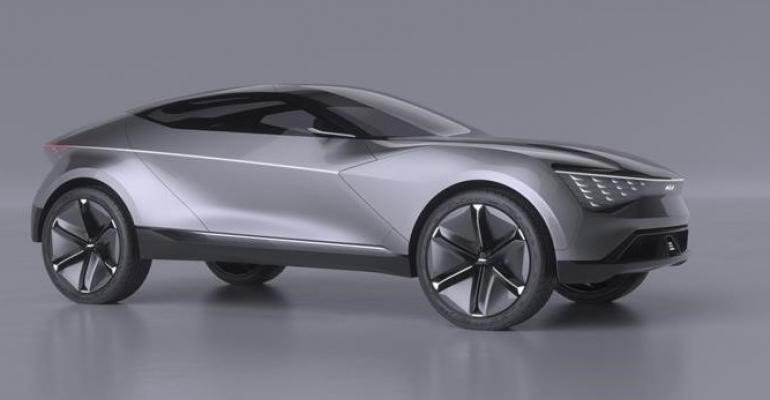 Lidar sensors are capable of providing the concept with Level 4 autonomous-driving features, enabling hands-off and eyes-off driving in most conditions, Kia says.

“The Kia Futuron Concept is built around a single, strong ‘360-degree’ design notable for its pure, smooth form devoid of ornament,” the automaker says in a news release. “The delicate diffusion of the body's surfaces creates a series of taut, flowing shapes which twist, expand and contract around the body.

“The result is a sleek and streamlined shape, creating an aero-efficient profile.”

Lidar sensors are capable of providing the concept with Level 4 autonomous-driving features, enabling hands-off and eyes-off driving in most conditions, Kia says.

The incorporation of Level 4 autonomous driving technology opens up a spacious and flexible cabin, Kia says. The two front seats, which the automaker compares to first-class airline seats, can offer an upright driving position or a reclined resting position.  Activation of the Futuron’s autonomous driving features causes the steering wheel to retract as the front seats recline, helping reduce fatigue on long drives.

The 360-degree theme is underscored by illuminating a sharp character line encircling the Futuron’s body. This lighting responds to physical gestures and movements made outside the car, the automaker says.

The grille incorporates the concept’s headlamps, which Kia says use a “Star Cloud” design “taking inspiration from nebulae in the night sky to create a geometric patchwork of matrix LED lighting.” Star Cloud lighting also is incorporated into the rear of the car.

Kia says the headlamps are covered by a “Dragon Skin” surface that “emulates the scaled armor that adorns Chinese dragons, both in mythology and modern-day cultural celebrations.” The Star Cloud lighting’s kinetic surface enables the car to alternate between daytime running lights and full-beam headlamps as the “scales” open and close.