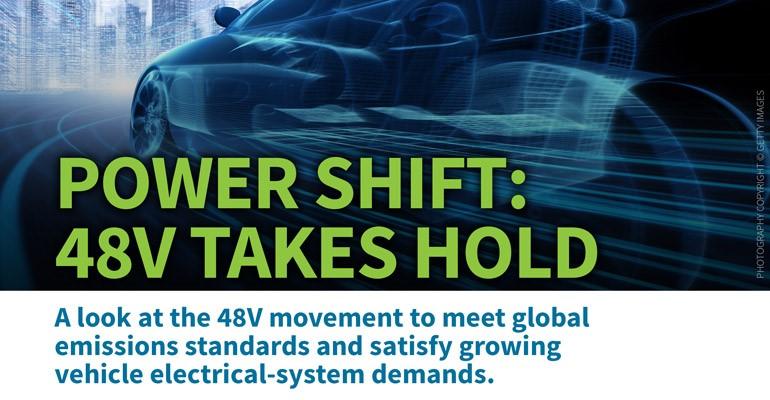 Of the 48V hybrid sales forecast globally for 2019, Europe accounts for 33%. That penetration will rise to 47% in 2024, according to a new Wards Intelligence report, “Power Shift: 48V Takes Hold.”

The movement to 48V electrical systems is in full swing.

Introduced three years ago with just a handful of applications, automakers

Numbers likely would go higher if automakers weren’t embracing even more aggressive vehicle-electrification strategies that have some only dabbling in 48V technology or sitting on the sidelines altogether.

With Europe now leading the world in targeting vehicle carbon-dioxide-emissions reductions, the region’s automakers are at the forefront of the march to 48V. Of the 48V hybrid sales forecast globally for 2019, Europe accounts for 33%. That penetration will rise to 47% in 2024, according to the LMC forecast included in the report.

German OEMs have bold plans for 48V hybrids in their mixes. Leader Volkswagen Group is expected to have more than 40 48V mild hybrids on the market in Europe in 2028. BMW and Daimler are forecast to have 20 such models in each of their European showrooms.

By nature of its sheer size, China also will be a big player in 48V mild hybrids. The world’s single-biggest automotive market will have the highest volume of 48V hybrid sales, reaching more than 5 million units at the end of the forecast period in 2028.

With U.S. emissions and fuel-economy regulations in limbo, 48V hybrid volume in North America will trail, forecast at below 1 million vehicles in 2024, compared with less than 200,000 units projected for 2019. The region is expected to reach sales of 1.2 million 48V mild hybrids in 2028.

Suppliers are gearing up for the transition, with technology under development for more advanced stop/start systems and extending beyond mild hybrids to 48V full battery-electric city cars and plug-in hybrids. Other systems and components ripe for conversion to 48V include all-wheel drive, climate controls, superchargers, suspensions and oil and fuel pumps.

“Power Shift: 48V Takes Hold” details the landscape around the movement to 48V, revealing automaker and supplier strategies, the global market outlook over the next decade and where the technology is headed.

Among the report’s highlights: