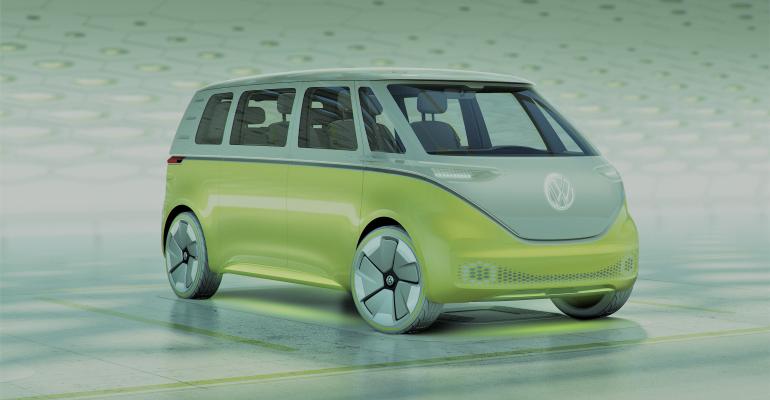 VW plant in Hanover, Germany, to build ID.Buzz van among other EVs.
Vehicles>Powertrain

Electric small cars and sedans from several brands will be built in Emden, Germany, while Hanover will specialize in the production of the ID. Buzz range in addition to building vehicles with conventional engines.

Volkswagen Group plants in Emden and Hanover, Germany, are to be converted to build electric vehicles under new plant assignments.

The VW supervisory board approved plans for the plants to build EVs that will begin rolling off the assembly lines there from 2022.

The automaker also is expanding its production capacity post-2022 with an additional plant in Eastern Europe.

Electric small cars and sedans from several brands will be built in Emden. Hanover will specialize in the production of the I.D. Buzz range in addition to building vehicles with conventional drives. A third German plant, in Zwickau, is to begin building EVs in 2019.

“German plants are particularly well suited to making the transformation to the production of EVs, given the high manufacturing expertise and qualification level of our employees,” says Oliver Blume, board member for group production.

Blume says efforts will be geared to reusing existing resources and factory structures and to cross-brand standardization with a view to increasing productivity and reducing factory costs and investments.

Production of the VW Passat range will be moved to the Škoda plant in Kvasiny, Czech Republic, and will be built there alongside the Škoda Superb and Kodiaq from 2023.

The Škoda Karoq and the SEAT Ateca will move from Kvasiny to a new multibrand plant at a new location in Eastern Europe.

General Works Council Chairman Bernd Osterloh says having a large share of e-mobility production locally recognizes markets in Germany and Western Europe, along with China and the U.S., will lead the way in introducing EVs.

Osterloh says he knows many colleagues, particularly in Emden and Hanover, are worried about job losses as a result of the transition.

“As employee representatives we have taken action,” he says. “A 10-year employment guarantee excludes compulsory redundancies until the end of 2028. We can make adjustments via the demographic curve so that no one loses their job.”

Group production has targeted a 30% increase in productivity by 2025.