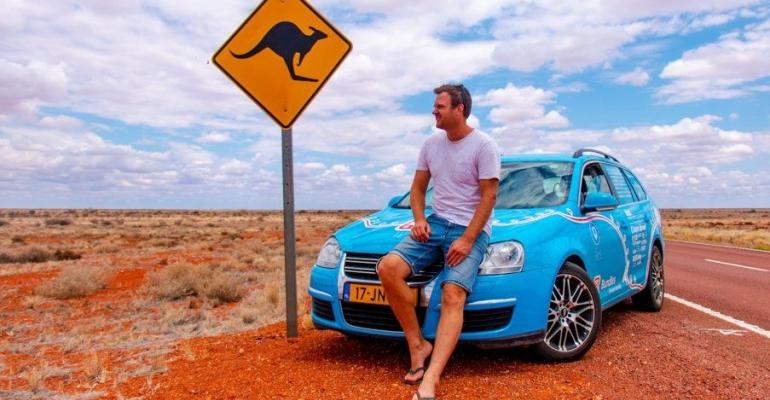 After more than 1,000 days behind the wheel of a modified Volkswagen Mk V Golf Wagon, VW says Wiebe Wakker has driven the farthest distance ever covered by an EV – more than 55,300 miles. The old mark was 13,670 miles.

Volkswagen says Wiebe Wakker is laying claim to a slew of electric-vehicle records after an epic drive from his native Netherlands to Australia.

The automaker says he also is the first person to visit 33 countries – including Turkey, Iran, India, Myanmar, Malaysia and Indonesia – in an EV.

Wakker set out for Australia from the Netherlands in 2016 without the necessities for any long journey covering remote areas: money, accommodation and fuel. Instead, he loaded up the Blue Bandit, a customized Mk V Golf Wagon fitted with an electric motor good for 124 miles (200 km) and hoped to rely on the kindness (and power) of strangers.

Now on Australian soil and in the final weeks of his three-year driving odyssey, Wakker’s plan worked thanks to supporters who gave him somewhere to stay and about 450 free battery charges along the way.

Wakker documented his travels via social media (https://plugmeinproject.com/) and met with companies, government organizations and media outlets to learn of the work being done on sustainability in each of the regions he visited.

The Blue Bandit started life as a standard gasoline Mk V Golf Wagon before its engine and fuel tank were replaced by an electric motor and battery. Wakker says the car originally was a project by a Dutch utilities company that wanted EVs to research vehicle-to-grid technology.

“Because there were no factory EVs that had this technology at that time, they decided to convert 50 Golfs to electric,” Wakker says in a statement. “This was back in 2009 so these are one of the first-generation EVs.

Now in Adelaide after driving down the west coast of Australia, Wakker is about to head for Sydney, planning to arrive in the harbor city in April.