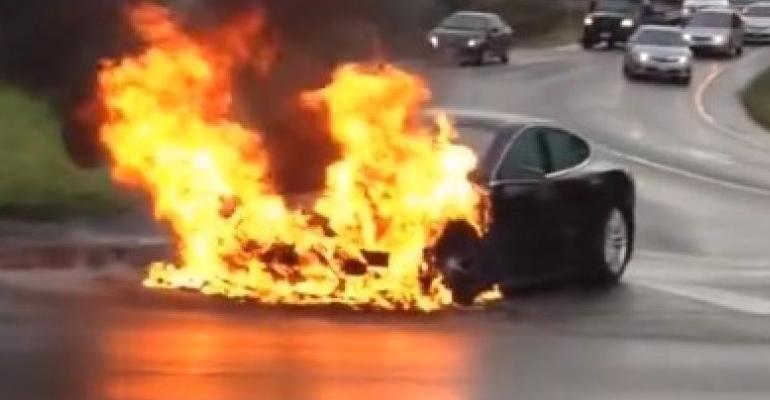 While most emergency-fire-response teams are well-versed in extinguishing fires in gasoline- and diesel-powered vehicles, a recent fire in a Tesla Model X raised the issue of whether crews should undergo mandatory specialist training.

LONDON – Questions are being asked about the capability of emergency services to handle car fires in electric vehicles.

While most emergency-fire-response teams are well-versed in extinguishing fires in gasoline- and diesel-powered vehicles, a recent fire in a Tesla Model X raised the issue of whether crews should undergo mandatory specialist training.

It was reported a U.K. Tesla caught fire after it had been recovered by emergency services, underlining the need for industry-led accreditations and qualifications for roadside technicians and emergency-services personnel working on EV and hybrid vehicles, says the Institute of the Motor Industry (IMI).

The group has been lobbying for the introduction of regulations for vehicle technicians working with electrically propelled vehicles.

The IMI’s recommendations to implement a License to Practice for those working on electric and hybrid vehicles form part of the government’s “Road to Zero” strategy, and it is urging roadside and emergency services to ensure their workforces are equally well prepared.

“In the most recent case, a Tesla battery caught fire again, even after fire services had put the initial blaze out and the vehicle was in storage,” says Steve Nash, IMI chief executive. “As motoring technology advances, it is vital that any professional coming into contact with these vehicles has the best possible training.

“These professionals are currently operating in an unregulated space and we firmly believe that our proposed License to Practice, supported by accreditation schemes, will deliver a higher level of competency, skill and safety for technicians and motorists alike,” Nash says.

“As we advance towards a zero-emission future, the technology that roadside technicians and emergency services will be coming into contact with on a daily basis will change – with high-voltage electrics becoming commonplace. But those who aren’t properly trained or equipped will be at risk from serious injury or potentially fatal shock.

“And it’s important to remember that emergency services don’t make a choice about what vehicles they deal with. We have lobbied the government to act now to ensure that a regulatory standard or License to Practice is introduced for anybody likely to deal with these vehicles.”