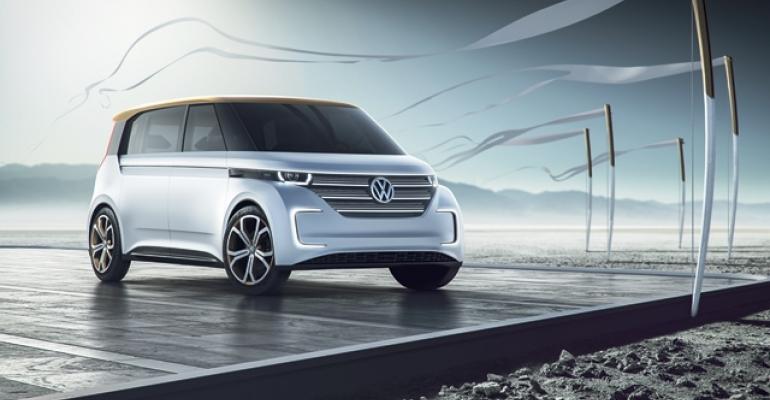 LAS VEGAS – Volkswagen Chairman Herbert Diess began and ended his keynote presentation at CES 2016 here apologizing for the automakers’ diesel emissions scandal and vowing to work night and day to fix the problem and win back customer trust.

But in between he laid out the automaker’s comprehensive strategy for electric vehicles and connectivity, giving it a cleverly warm spin as he evoked nostalgic images of the old VW microbus of the 1960s, winning lots of oohs and ahhs from the packed auditorium.

Then he introduced the BUDD-e, a nostalgically designed electric-powered microbus laden with all the latest technology, including a 101-kWh battery that provides up to 373 miles (600 km) of pure electric range on the optimistic European testing cycle. Range on the more rigorous EPA cycle is said to be 233 miles (375 km).

It is a square, practical package, but inside and out the Budd-e is loaded to the gills with the latest technologies and concepts. Doors can be opened with the wave of a hand or a simple voice command.

It showcases VW’s new MEB EV platform that is said to be the basis of its next-generation connectivity and infotainment concepts, including new human-machine interface and ergonomic concepts, plus it also communicates with your home and can tell you if there is enough beer in the refrigerator to invite guests over. And you can actually look at the person ringing your doorbell from your car and decide if you want to let them in your house.

Claimed to represent what electric mobility could be like in 2019, the automaker says it will be a mass-produced car that will have pure electric range on par with today’s gasoline-powered cars by the end of the decade. Plus, batteries could be charged to 80% of their capacity in about 15 minutes, instead of hours like it does now.

The new VW architecture is designed to have the space for electric drive components and large batteries while maintaining interior space and driving dynamics. The battery is flat, to save space, and integrated into almost the entire vehicle floor. It powers two electric motors, one to drive each axle.

The front and rear motors power all four wheels and enable a top speed of 93 mph (150 km/h).

The interior design of the BUDD-e is characterized by a completely new and innovative human-machine interface.

With BUDD-e’s interface design, VW eliminates the traditional distinction between the electronic instrument cluster in front of the driver and the center console infotainment system. In a move towards comprehensive digitalization and the individualization of the driver’s workplace, these two areas have been merged to form a single information hub.

All the systems are operated intuitively with gesture controls, touchscreen (displays and touch slider) or voice control. The driver can choose between various intuitive control modes.

A simple “Hello BUDD-e” activates the vehicle’s voice control. The system also offers completely natural speech interaction. For example, if the driver asks “turn the heat up a bit, please”, the car will respond immediately and appropriately. The system is also able to locate the passenger giving the commands, and react accordingly. If, for instance, someone sitting in the left rear seat says “It’s too hot here”, BUDD-e can immediately lower the temperature in that passenger’s zone.

The BUDD-e’s programmable instrument cluster is an evolution of the Active Info Display first introduced by Volkswagen in 2015. A 12.3-inch curved display with a surface consisting of three individually configurable sections is centrally positioned, right in front of the driver.

In the BUDD-e, experts from the Body Electronics division have incorporated sensor technology already capable of recognizing people as they are approaching the vehicle. For the exterior, this is accomplished through the use of infra-red sensors.

An intuitive hand gesture opens the BUDD-e’s sliding door. A simple foot movement of the “Virtual Pedal 3.0” opens the electrically operated tailgate, marking a further development of the easy open function. The gesture control system inside the BUDD-e’s interior is more intuitive than ever before, with the maximum operating distance having been significantly increased.

Cameras are used to register if a passenger in the rear compartment wants to open the sliding door, for instance. Interactive displays and projections also assist the driver and passengers during operation.