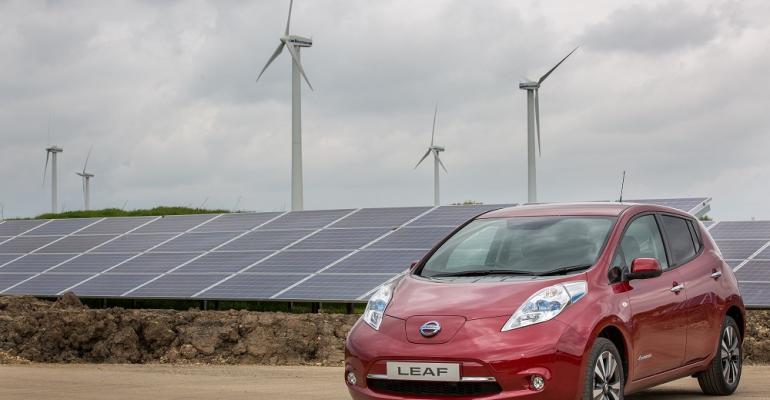 Sunderland&rsquo;s 19,000 solar panels and 10 wind turbines save the equivalent of 3,000 metric tons of carbon dioxide annually and generate&nbsp;7% of the plant&rsquo;s electricity needs, enough to build the equivalent of 31,374 vehicles a year.

SUNDERLAND, U.K. – Nissan’s commitment to clean energy has enabled its factory in the northeast of England to build more than 31,000 vehicles a year on “green” power alone.

The plant in Sunderland now boasts 19,000 solar panels and 10 wind turbines to save the equivalent of 3,000 metric tons of carbon dioxide annually.

Nissan this week switched on the new solar farm at its largest manufacturing site in Europe as it strives toward twin goals of zero emissions and zero fatalities.

The solar farm has been installed alongside the 10 wind turbines already generating power for the plant, which is the European center of production for the all-electric Nissan Leaf and its batteries.

“We have built over 50,000 Nissan Leafs in Europe, and the industry-leading new 155-mile-range (250-km) Leaf is now available. With 10 wind turbines already generating energy for our Sunderland plant, this new solar farm will further reduce the environmental impact of Nissan vehicles during their entire lifecycle.”

Nissan began integrating renewable energy sources at the factory in 2005 when it installed the turbines contributing 6.6 megawatts of power. The new solar farm produces 4.75 Mw, bringing the total output of renewables to 11.35 Mw. This equates to 7% of the plant’s electricity requirements, enough to build the equivalent of 31,374 vehicles.

The solar farm was developed and installed within the loop of Nissan’s vehicle test track in Sunderland by partner company European Energy Photovoltaics.

Its installation comes as Nissan celebrates its 30th anniversary of manufacturing in the U.K., with Sunderland having become the region’s biggest car plant and supporting nearly 40,000 jobs in vehicle design, engineering, production, parts distribution,  sales and marketing, dealer network and supply chain.