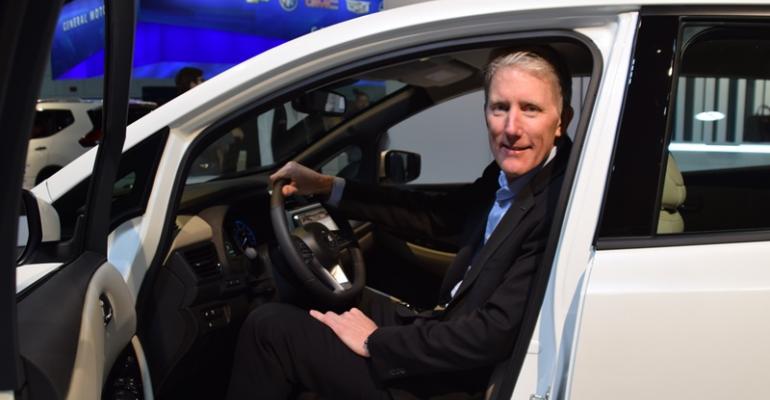 Reed is convinced 150 miles of range meets 90% of the usage requirements for Leaf customers. A more-powerful 60-kWh battery coming later is expected to extend range well over 200 miles (322 km).

DETROIT – The arrival of the all-new ’18 Nissan Leaf, which goes on sale in the U.S. in early 2018, is further evidence that electric vehicles are here to stay, says Chris Reed, Nissan North America’s vice president-research and development.

The second-generation Leaf was unveiled simultaneously on Tuesday in Japan and Las Vegas and Wednesday morning here at the first Technology in Motion mobility conference at Cobo Center.

As automakers unveil new battery-electric vehicles with longer driving range, such as the Chevrolet Bolt, Tesla Model 3 and now the Leaf, Reed says consumers are bound to be more open to them and find a zero-emission car may meet their needs nicely.

Nissan managed to keep the new Leaf priced below $30,000 (before state and federal credits are added), which comes in well below Bolt and Model 3 pricing.

Reed is convinced the new Leaf is the right package at the right price, and that 150 miles of range meets 90% of the usage requirements for Leaf customers.

He admits the 60-kWh system will drive up the sticker price, but he believes that price will be “fair, not out of the realm of what others are doing.”

Reed knows Nissan customers are more value-oriented than Tesla buyers, and the question is how much Leaf customers will be willing to pay for extended range.

“From that standpoint, Tesla has done a great job breaking in people who are not so price- sensitive but also are early adopters in a sense,” Reed tells WardsAuto. “Their customers are spending a lot of money for an electric car; they are committed to it. Each manufacturer is bringing a different customer into the market, and all of it builds together.”

The new Leaf, like the first-generation vehicle it replaces, will be built for the North American market at Nissan’s manufacturing complex in Smyrna, TN, along with the battery pack powering it. Electric motors are coming from Nissan’s engine plant in Decherd, TN.

The prior year, Nissan introduced a lower-priced S-trim version of the Leaf and began producing the vehicle in Smyrna and Sunderland, U.K.

Like the previous generation, the new Leaf will come available in S, SV and top-end SL trim packages, and all U.S. models will come standard with a 147-hp electric motor, 6.6-kW onboard charger, a 7-in. (18-cm) information display, automatic emergency braking, Bluetooth hands-free phone connectivity and a rear-view monitor.

Reed says Nissan North America, which has 1,200 engineers at its technical center in suburban Detroit, played a vital role in developing and advocating for the e-Pedal feature in the new Leaf.

“It was a case of our team listening to the customer, listening in each region in the country,” he says. “We were holding some clinics in California – there are a lot of EV buyers out there – and we were hearing feedback about how to get more EV-ness” in the new Leaf to improve regeneration of brake energy.

Also at the TIM conference, AlixPartners consulting firm unveils a new index for measuring the progress of companies and countries in the march toward electrification of cars and light trucks.

The Automotive-Electrification Index tracks the number of electrified vehicles (including EVs, plug-in hybrids and fuel-cell electrics) sold and measures the combined range of these vehicles, what the analysis calls the “e-range.”

The index also tracks an automaker’s “e-share” as a percentage of the total range of all cars and trucks of all kinds sold by that company.