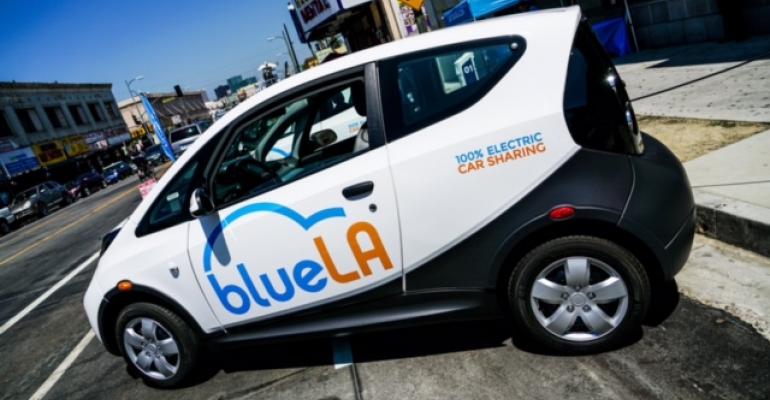 The focus on low-income areas is at the request of California&rsquo;s Air Resources Board. A $1.7 million government grant comes from a cap-and-trade program that requires companies to buy permits to release greenhouse-gas emissions. &nbsp;

In early June the City of Los Angeles launched the BlueLA Electric Car Sharing Program. The immediate goal was to give low-income neighborhoods access to electric vehicles. In the longer term, BlueLA is part of a broader effort to greatly increase the number of EVs on the road.

The program works like this: BlueLA stations will be built around Los Angeles. While anyone can rent an EV at the station, there will be special incentives to make the car affordable for low-income individuals.

“The ultimate goal is for them to give up whatever gas-powered car they have, so they can get into the habit of using electric vehicles,” Susana Reyes, senior analyst with the Sustainability Team-Budget and Innovation in the office of Los Angeles Mayor Eric Garcetti, tells WardsAuto.

The first station is complete, but the program won’t go live until three or four stations are in operation, Reyes says. That is expected to occur in a few weeks. By April the city aims to have 20 stations in place. Eventually 100 EVs will be in the program.

BlueLA is operated by France’s Bollore’ Group, which has a similar car-sharing program in Paris and operates BlueINDY, an EV-sharing program in Indianapolis. That experience was key to Los Angeles’ selection of the French conglomerate to implement BlueLA. Besides, Reyes says, “We couldn’t find anyone else who could operate the program.”

The powertrain was designed by Bluecar and is manufactured by Actia Group, a French firm that specializes in electronics systems for the telecom and automotive sectors.  Bollore’ itself produces the batteries at plants in France and Canada. The range is 120 miles (192 km) per charge.

The program is funded in part by a $1.7 million grant from the State of California. The focus on low-income areas is at the request of California’s Air Resources Board (CARB). The funds come from a cap-and-trade program that requires companies to buy permits to release greenhouse-gas emissions.

Low-income neighborhoods “are where we see more pollution,” CARB spokesperson Pamela Diaz tells WardsAuto. “That is part of the focus of cap-and-trade.”

Besides turning people on to EVs, the program is part of the city’s bigger plan to promote shared mobility, says Marcel Porras, chief sustainability officer with the Los Angeles Department of Transportation.

Though Los Angeles will continue to “be a city where a lot of our trips require cars,” he says, “we also need to provide options or alternatives.”

The DOT has held numerous workshops, primarily in Spanish, to spread the word about BlueLA, says Porras, who says his position is focused on expanding shared mobility.

Easy access to EVs is part of Sustainable City pLAn, a document released in 2015 by the mayor’s office in 2015 that, among other things, commits to EVs for 50% of all light-vehicle purchases by the city by 2017.

“We are really looking at EVs as part of a broader effort around transportation in the city,” says Lauren Faber, the mayor’s chief sustainability officer. The city is allocating funding to drastically increase the number of public charging stations, of which there now are more than 1,400, she says.

The city also is looking at how to influence the vehicle market beyond its boundaries.

At the end of 2016, Los Angeles and other West Coast cities including Portland, Seattle and San Francisco sent a request for information to automakers, asking them what EVs they can provide, at what price point and over what time. The RFI is seen as a precursor to an actual bidding process.

Some 30 additional cities belonging to the Mayors’ National Climate Action Agenda have joined the RFI, Faber says. Those cities account for some 115,000 light, medium and heavy-duty municipal vehicles, she says.

The message to automakers: “This is the potential. We want to go electric. Show us what you’ve got,” she says.