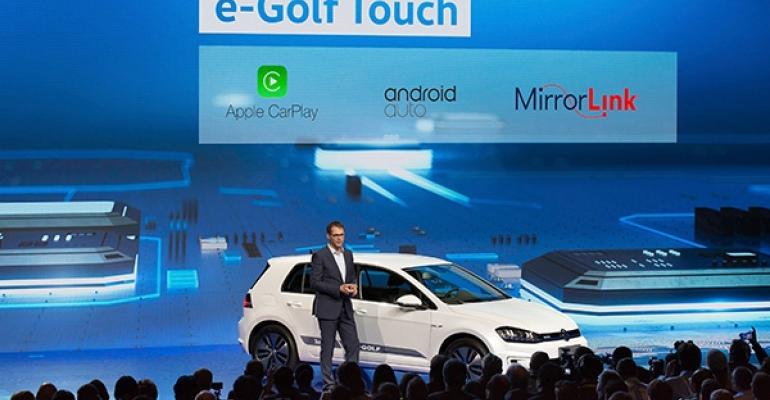 The automaker says a higher-capacity lithium-ion battery and an upgraded electric motor combine to give the facelifted e-Golf 186 miles of range on the European test cycle on a fully charged battery, up from the current model&rsquo;s 118 miles.

Volkswagen says its facelifted e-Golf being unveiled later this year will feature an upgraded electric drivetrain providing it with an official range of up to 186 miles (300 km), or some 68 miles (110 km) more than today’s $28,995 model.

Key among the changes planned for the all-electric hatchback is a new, higher-capacity lithium-ion battery. VW says updated cell technology significantly improves the energy efficiency of the battery, increasing its capacity from 24.2 kWh to 35.8 kWh.

In combination with an upgraded electric motor providing 134 hp, up from 113 hp in the outgoing version, the facelifted e-Golf is said to provide an additional 68 miles of range on a fully charged battery than today’s model at 186 miles on the European test cycle.

According to Volkswagen’s head of electrical development, Volkmar Tanneberger, this will provide the facelifted model with a real-world range of up to 124 miles (200 km).

Volkswagen already has provided clues to other changes to the facelifted e-Golf with the unveiling of its e-Golf Touch concept car, which features the automaker’s Active Info digital instrumentation along with a 9.2-in. (23.4-cm) infotainment monitor incorporating gesture control.

The new e-Golf will be unveiled alongside the rest of the facelifted seventh-generation Golf lineup in October. North American sales begin in 2017.