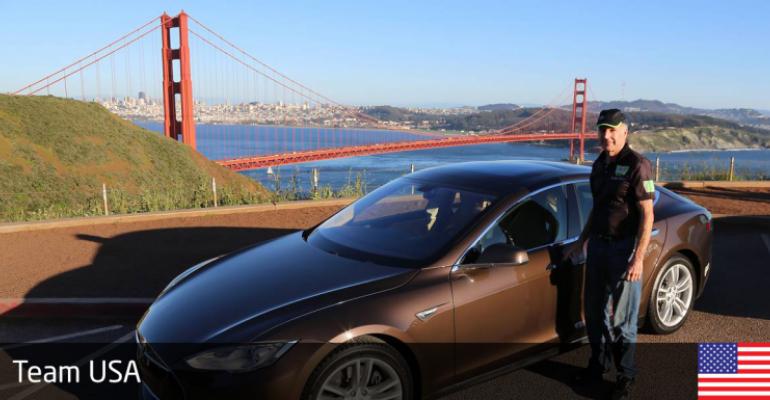 Around the World With Range Anxiety

DETROIT – Consumers are reluctant to buy battery-electric vehicles for fear they will be stranded on the side of the road without a place to plug in.

Don Christian and a group of 40 adventurous souls set out last summer to ease those concerns by doing the unthinkable: circle the planet in electric vehicles, burning not a drop of gasoline.

With the help of cargo planes to get across the oceans, 11 battery-powered vehicles – mostly Teslas – set out from Barcelona last June for Elduro 2016, a tour organized by 80edays, a group of EV enthusiasts whose goal was to replicate Jules Verne’s famous story of a race around the world in 80 days.

Christian, from Fremont, CA, and a former executive with Divergent 3D, was a passenger in a Tesla Model S owned and driven by Alan Soule, a fellow Californian. They were the only American team, while the others came from Austria, China, Czech Republic, Germany, Hungary, Italy, Spain and Switzerland.

Six of the Teslas were Model S P70s, capable of 240 miles (386 km) per charge, and there was one Model S P85 that could travel 312 miles (502 km). A Tesla Roadster made the trip, as did a Denza, a Chinese EV springing from a joint venture between Daimler and BYD Auto.

Filling out the field was a Hungarian Modulo city transit bus, which couldn’t fit on the cargo plane, so it crossed the oceans by ship. Both the Denza and the bus had the shortest range, about 220 miles (332 km) per charge.

In vivid detail, Christian told his entertaining tale to a rapt audience at last week’s SAE World Congress Experience here. Challenges surfaced daily, from a coup in Turkey that forced a route change and charging plugs that were incompatible to batteries that overheated in the Gobi Desert to U.S. Customs agents who wouldn’t let a bus enter the country.

“EV charging was like the least of our worries through all this,” Christian told the crowd.

The U.S. model Christian and Soule drove has a different charging port than Teslas sold in Europe and China, so that required rewiring a plug that fit. The same thing happened over and over for all the vehicles, which explains why every team had an experienced electrician onboard.

“Note SAE members, there are no U.S. standard plugs in any of these vehicles,” Christian tells the crowd. “Nothing matches the SAE world standard. We had to interface with different plugs at different times.”

Electricity isn’t the same around the world – it comes in different voltages, phases and currents. “Most of the time we ended up making our own cables as we went along,” he says. “Almost every day in Asia we’d find ourselves making another cable. This is not like USB. USB really is a world standard, and you can plug in anywhere in the world and it will work.”

Along the way, there were “serious safety concerns” as the teams encountered different types of electricity. “Our solution was to carry lots of cables,” he says, showing pictures of the front trunk of a Model S completely filled with plugs, cables and adapters.

Christian’s car and the Denza also needed to be rewired with AC to DC converters to allow them to charge quickly. Typically, each team charged twice daily: overnight and around noon, wherever a team could find juice and get back on the road.

On the first leg, through Spain and Portugal, charging stations were plentiful. From there, the cars were flown to Nova Scotia, where problems surfaced immediately.

The Chinese Denza was having trouble charging at all because its big 4-prong plug is shared with recreational vehicles. The solution required the Denza team to do all of its charging in North America in campgrounds.

Another problem: when the Hungarian bus made it to the U.S. border, agents wouldn’t let it cross. So the team “converted” it to an RV by hanging a shower curtain inside (even though there was no running water) and a few hammocks. The bus was allowed to pass.

With plentiful charging stations in the U.S., each team took a different cross-country route to Los Angeles, a 3,678-mile (5,919-km) trek. Some teams stopped in certain towns to visit friends or relatives.

“Special thanks to Nissan because every Nissan dealer allowed us to charger the European cars with their CHAdeMO connectors,” Christian says. “The European cars could not use the U.S. Tesla superchargers, so they had to use the Nissan type chargers.”

Crossing the Nevada desert was a problem only for the Tesla Roadster, which burned out its electric motor and had to be towed to Tesla’s Gigafactory for a replacement.

Christian says the “low point of the entire trip” was having to use painfully slow 120V current from a standard wall socket in the U.S. when a 240V Level 2 charger was not available.

From L.A., the cars were flown to Guangzhou, China, while the bus came by ship. Charging was plentiful in eastern China, and the State Grid power company helped the road warriors map a trouble-free route.

Crossing western China was more difficult, not only due to inadequate navigation and road signs. “We got to the Gobi Desert, and the climate changed,” Christian says. “We had to carry Chinese translators in each car and travel together. We all had to stay in the same hotel every night.”

In the desert heat, the teams had to water-cool their electronics in the shade by draping a towel over top of the AC/DC converters and pouring a little water on top. “Still, we had cable fires with these precautions. This is quite serious,” he says. “We had to stop, replace the cable, make another cable and go back to charge. Then we ran into Arabic road signs.”

It was in the Gobi Desert that the bus turned back, was placed on a ship and sent to Bucharest, Hungary, where it rejoined the other teams for the final leg back to Barcelona.

But the rest of the teams pushed on into Kazakhstan and Russia, traveling at times on the old Silk Road, which dates to 363 BC.

At one border crossing, agents demanded the teams’ “pistols,” but none of them was packing. Finally, the teams realized the agents wanted to know how many “pistons” were in each vehicle. “They inspected every car to make sure we weren’t carrying pistons or pistols, and we finally got past,” he says.

Electricity was scarce in Kazakhstan. At one gas station, the burly Russian proprietor was reluctant to let the teams charge but finally invited them to a service box out back. “You’re in luck,” Christian quotes the man saying with a thick Russian accent. “Soviet box is rusty but powerful.”

The man helped connect the vehicles for charging and said, “Russian power is strong like vodka – too strong for American car.” But Christian said the cars and service panel proved to be compatible.

“This same picture worked for us all the way across Kazakhstan and Asia,” he says. No one got electrocuted, “but there were incidents.”

The teams came upon a Soviet ghost town, which had been a uranium mine years ago. On this leg of the journey, potholes were car-sized, resulting in a fractured front suspension and lots of flat tires.

“But the Kazaks and Russians were very friendly,” and the teams rolled through Red Square in Moscow. “The best charging we got on the whole trip was in the Ukraine, where the gas stations are better than in the U.S. But at one station, we did blow out the local power. We tiptoed out of town.”

After such a harrowing journey, Christian described traveling through western Europe as “Disney Land.”

Even accounting for the loss of a day crossing the International Date Line, the teams made it back to Barcelona in 80 days. The final tally: 17,595 miles (28,332 km) traveled, 20 countries, six flat tires, two broken chargers and “zero empty battery incidents. We charged all the way around the world.” And never once did Christian’s team have to sleep in the car.

So who won the race? “The first guy to the charger wins the race for that day,” he says. “Every day was a separate race.”