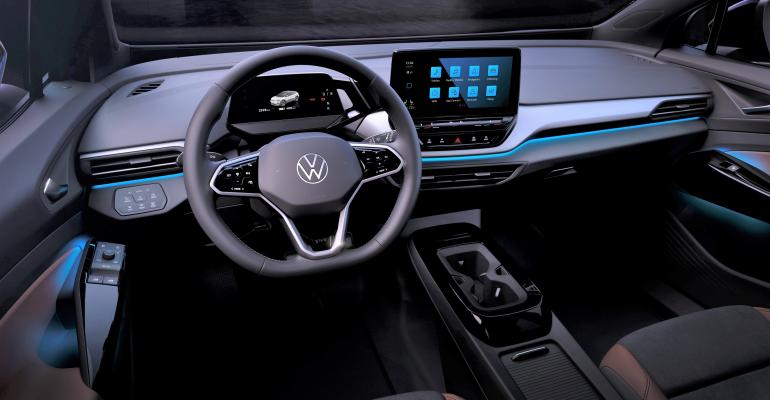 Volkswagen
Slide behind ID.4 steering wheel for the first time, and a driver is likely to exhale, relax the shoulders and smile at the sheer simplicity of it all.
10 Best UX>2021 10 Best UX

Volkswagen's ID.4 represents a monumental leap into a world where physical buttons are unnecessary, where voice controls perform as intended, where high-definition touchscreens are loaded with information and easy to use.

The 2021 Wards 10 Best UX winners are being revealed in random, non-alphabetical order one per day until Nov. 3. This is the first winner profile. Winning design teams will receive their trophies Nov. 17 during Automotive TechWeek in Novi, MI., where winning vehicles will be on display.

It’s no stretch to suggest the future of the Volkswagen brand is riding on the success of its ID.4 battery-electric vehicle, which went on sale in the U.S. a year ago and is now available in every major market globally, including China.

For environmental, political and business reasons, VW is ready to move on from the age of internal-combustion engines to a world of zero emissions – at least from vehicle tailpipes. 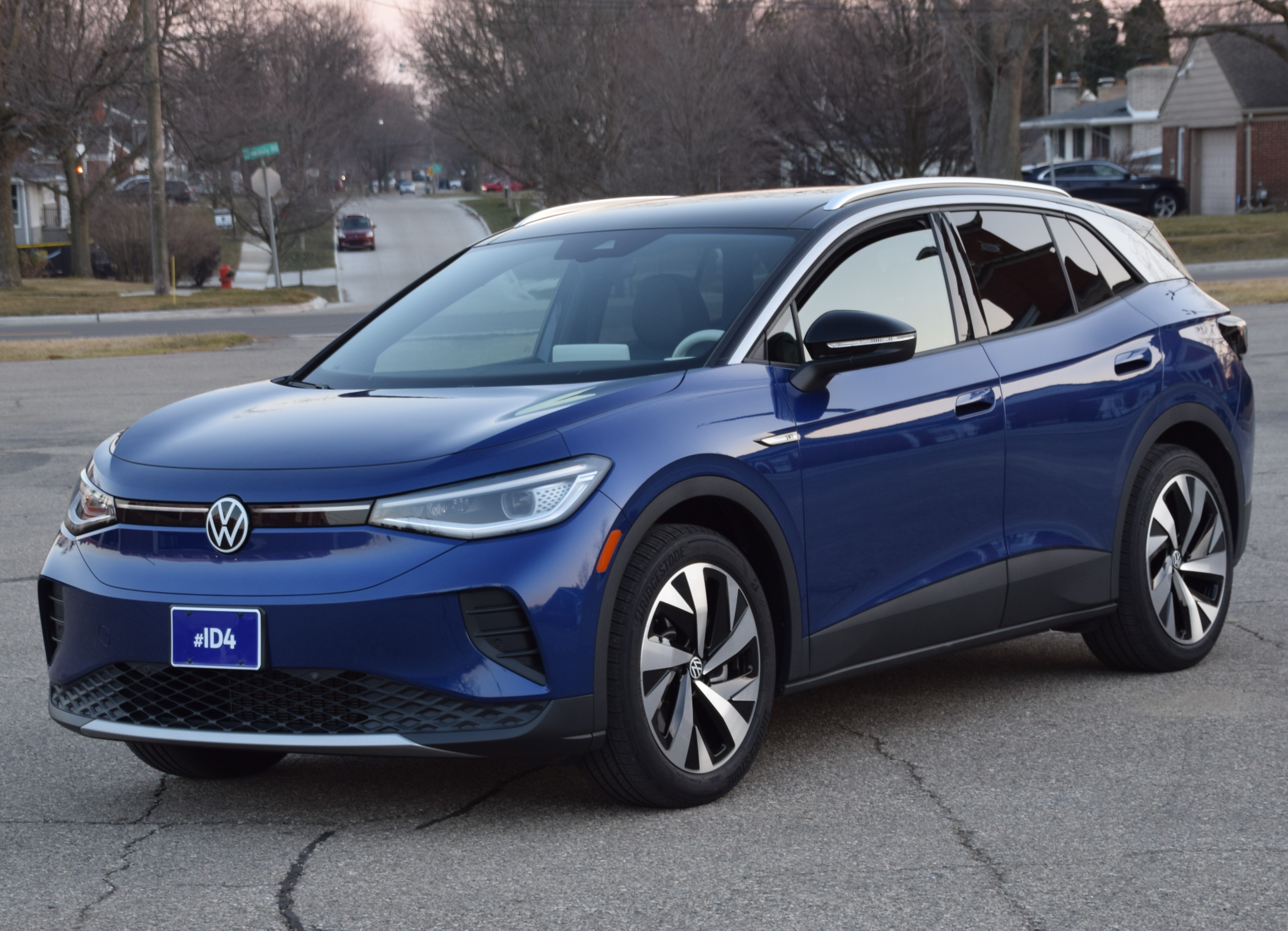 The user experience of the ID.4 BEV (pictured, left) perfectly captures this mission by creating a sense of serenity within the cabin rooted in a design aesthetic that can only be perceived as boldly futuristic, even space-age.

For achieving all this so well, the ID.4 wins a 2021 Wards 10 Best UX trophy. That’s five wins in a row for VW, since the three-row Atlas was a winner in 2017, followed in succession by the Jetta, Arteon and two-row Atlas Cross Sport.

Those previous winners were impressive, but the ID.4 represents a monumental leap into a world where physical buttons are unnecessary, where voice controls perform as intended, where high-definition touchscreens are loaded with information and easy to use.

Slide behind VW’s newest Multi-Function steering wheel (which incorporates capacitive-touch switches and has standard heating across all trims) for the first time, and a driver is likely to exhale, relax the shoulders and smile at the sheer simplicity of it all.

The center console – normally a place for joystick controllers, gear shifters, seat-heat buttons and other features necessary in modern cars – is completely void of any such outdated foolishness in this five-door CUV. The only reason to reach toward the center console is for a sip of coffee. 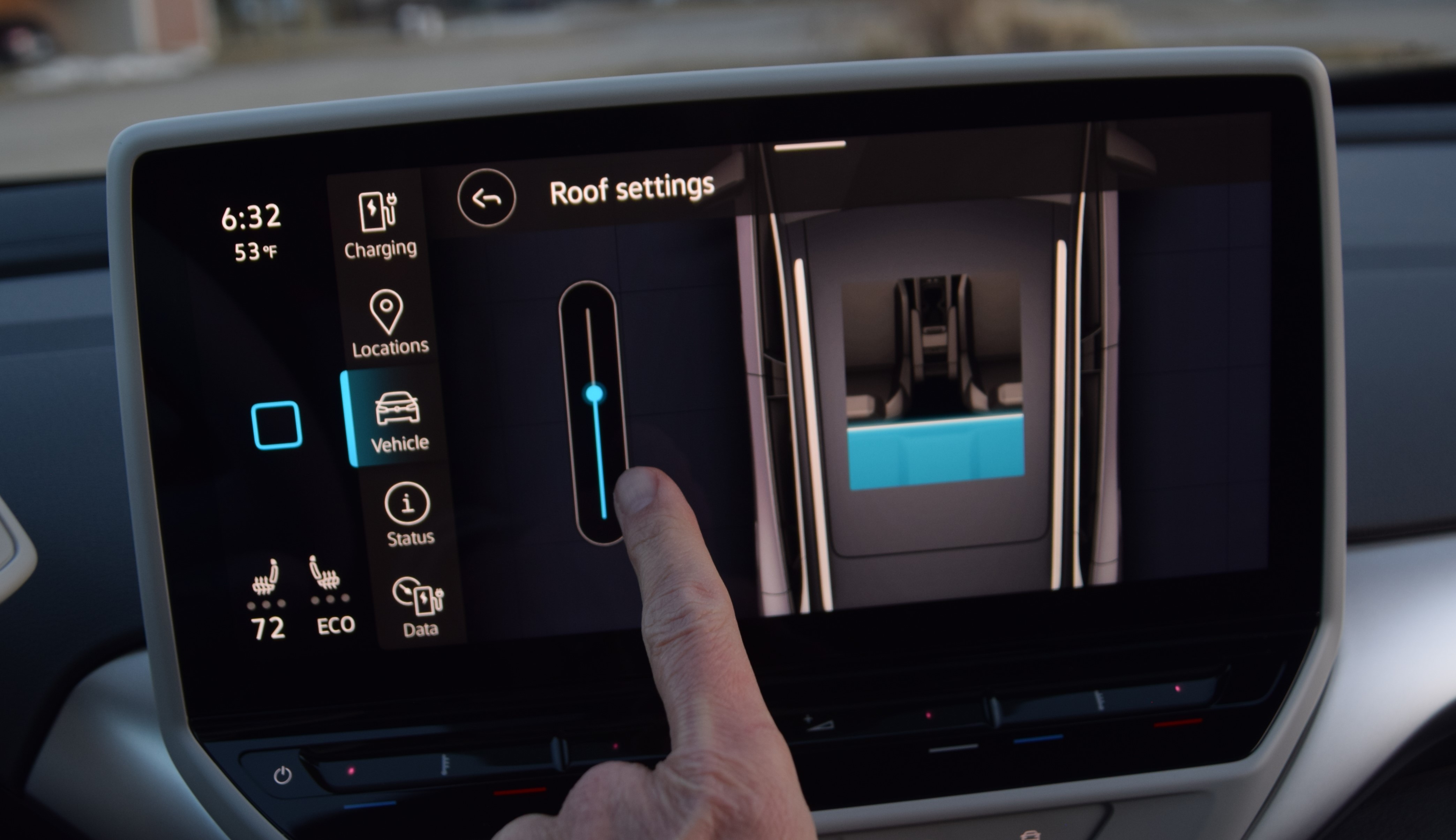 And above that, where most vehicles today populate valuable real estate with a touchscreen and still more buttons and switches, the ID.4 presents a screen that controls just about every infotainment, personal-comfort and vehicle function you can imagine.

It’s like being on the Starship Enterprise, where the computer does all the work. Houston, we have no problem with this system or its configuration -- all made possible by a network architecture that Volkswagen designed from scratch for its modular MEB electric vehicle platform. Two central high-performance computers provide the electronic intelligence in place of multiple control units in conventional vehicles.

VW’s “Hello ID” voice-control system in the ID.4 is the brand’s most advanced yet. With voice, the driver can turn on climate control and the heated seats and steering wheel and even open or close the available retractable sunshade (pictured above).

There are two microphones, so the Hello ID system can distinguish between the driver and passenger when commands are given. If the passenger says she is cold, the system will turn up the temperature for passenger only. 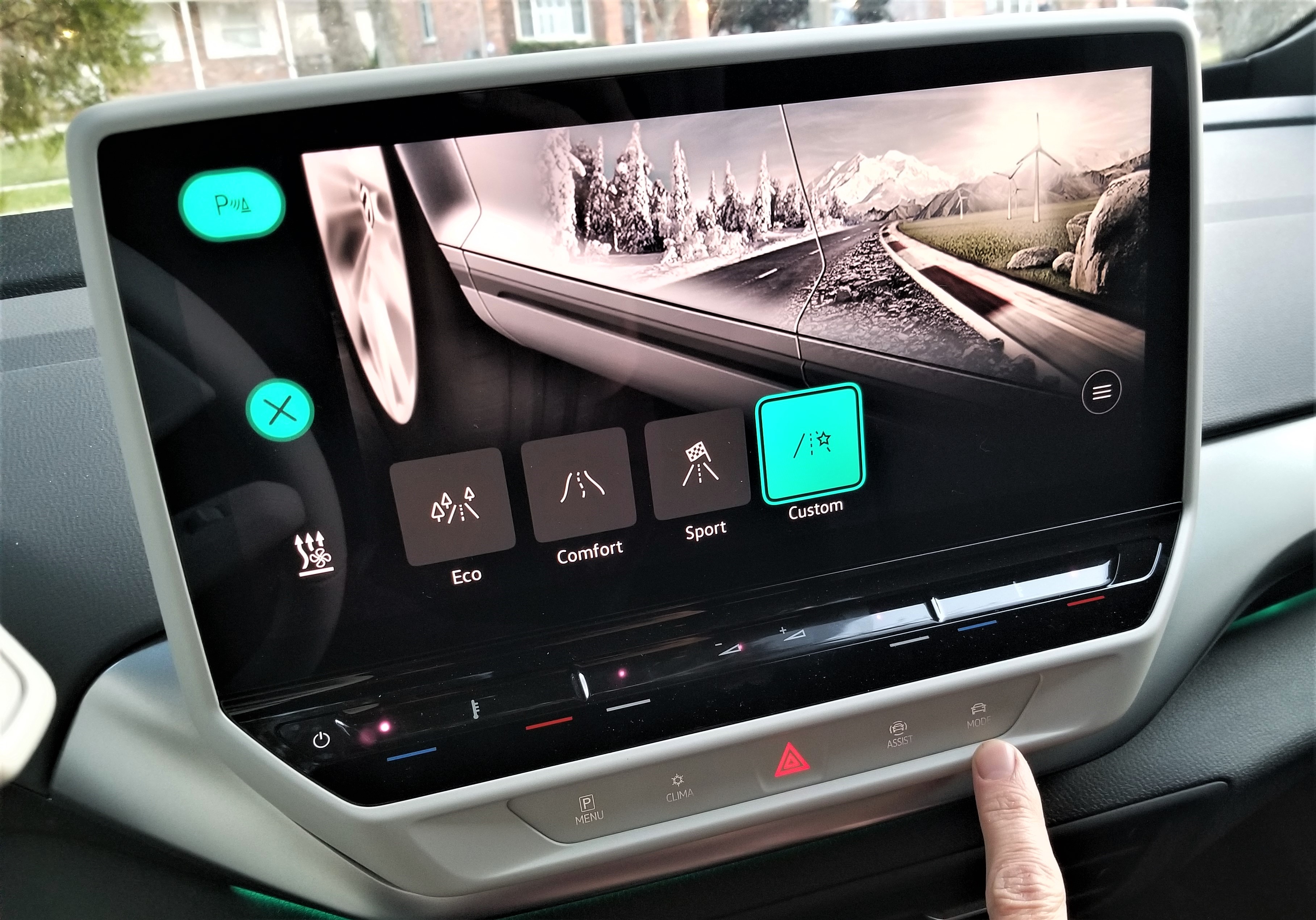 Further reflecting the futuristic theme is a light bar that runs across the instrument panel and uses glowing visual and acoustic cues to telegraph incoming calls, brake warnings, charge status and more.

Likewise, both Discover Pro touchscreens [10 ins. (25 cm) and 12 ins. (30 cm)] were newly designed for the ID.4, as was the infotainment system, which enables interactive navigation, smartphone-like customization and gesture control.

Graphics on the main display screen (pictured above) are bright and colorful, appearing often in 3D. Carrying on the simplicity theme, the climate and volume controls underneath the screen have no words – only an icon thermometer between a blue touchpad and a red touchpad. Volume is denoted by plus and minus signs over a triangle that suggests sliding right will crank it up.

Below that row of icons are the only words always visible in the center stack or center console: Menu (for the homescreen), Clima (with snowflake above it and yes, without the last two characters of the word Climate), Assist (for ADAS technologies) and Mode (for a customized ride). 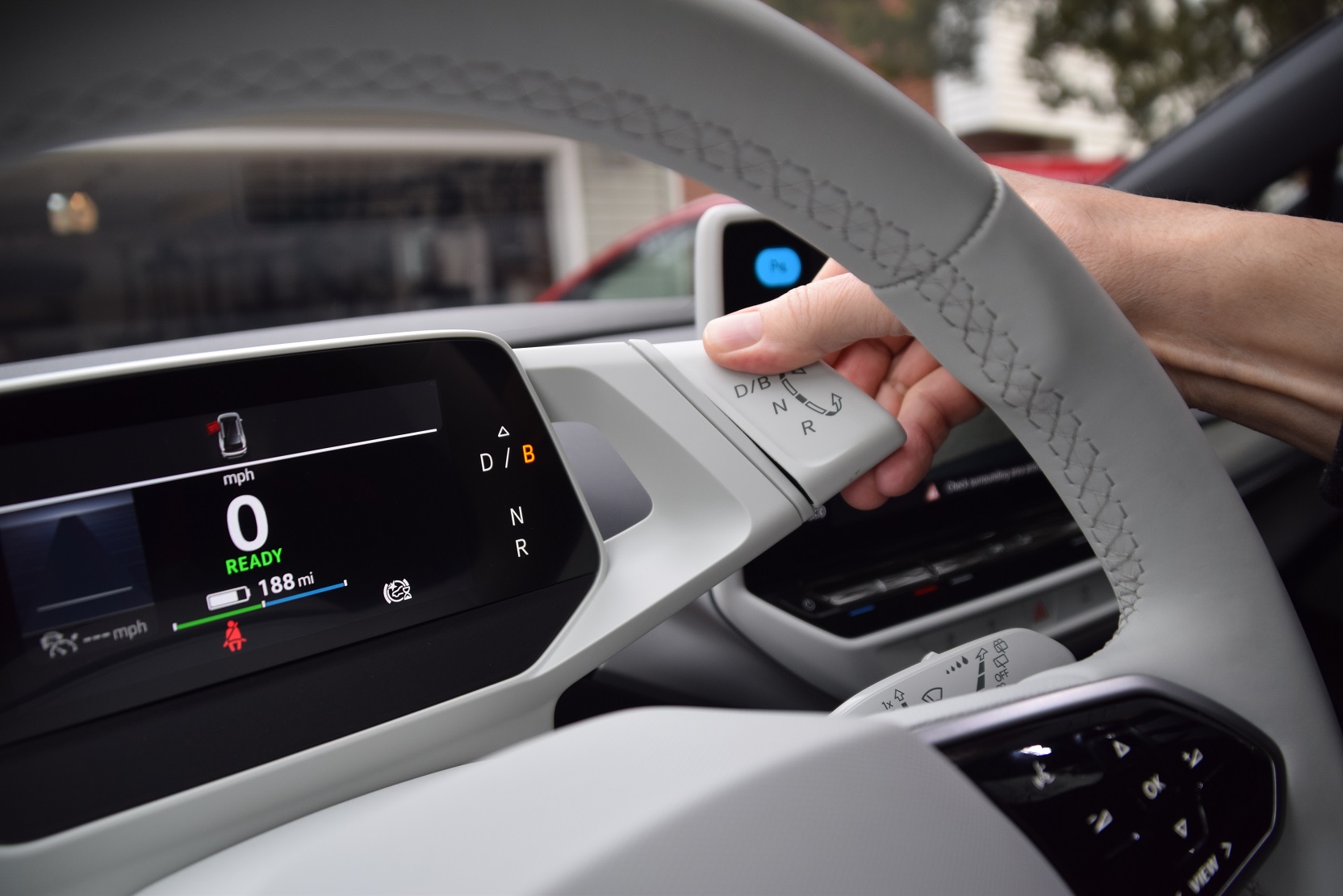 These are capacitive buttons that take you swiftly to the correlated menus on the screen. It’s all self-explanatory.

There’s more. The gearshift is practically hidden (pictured above), attached cleverly to the right side of the minimalist instrument cluster, which is mounted directly to the steering column.

Judge Bob Gritzinger calls this integration “smart, especially for those of us who drive upright and often struggle with a third or half of the cluster blocked out by the steering wheel.”

Let’s not overlook the wild window switches (pictured below). There are four windows but only two window switches on the driver’s door. That’s because there’s a “Rear” tab just above those two switches. Push that tab and the word Rear turns yellow, so you can raise or lower the rear windows. Hit that tab again and the same switches control the front windows only. Minimalistic! Genius! 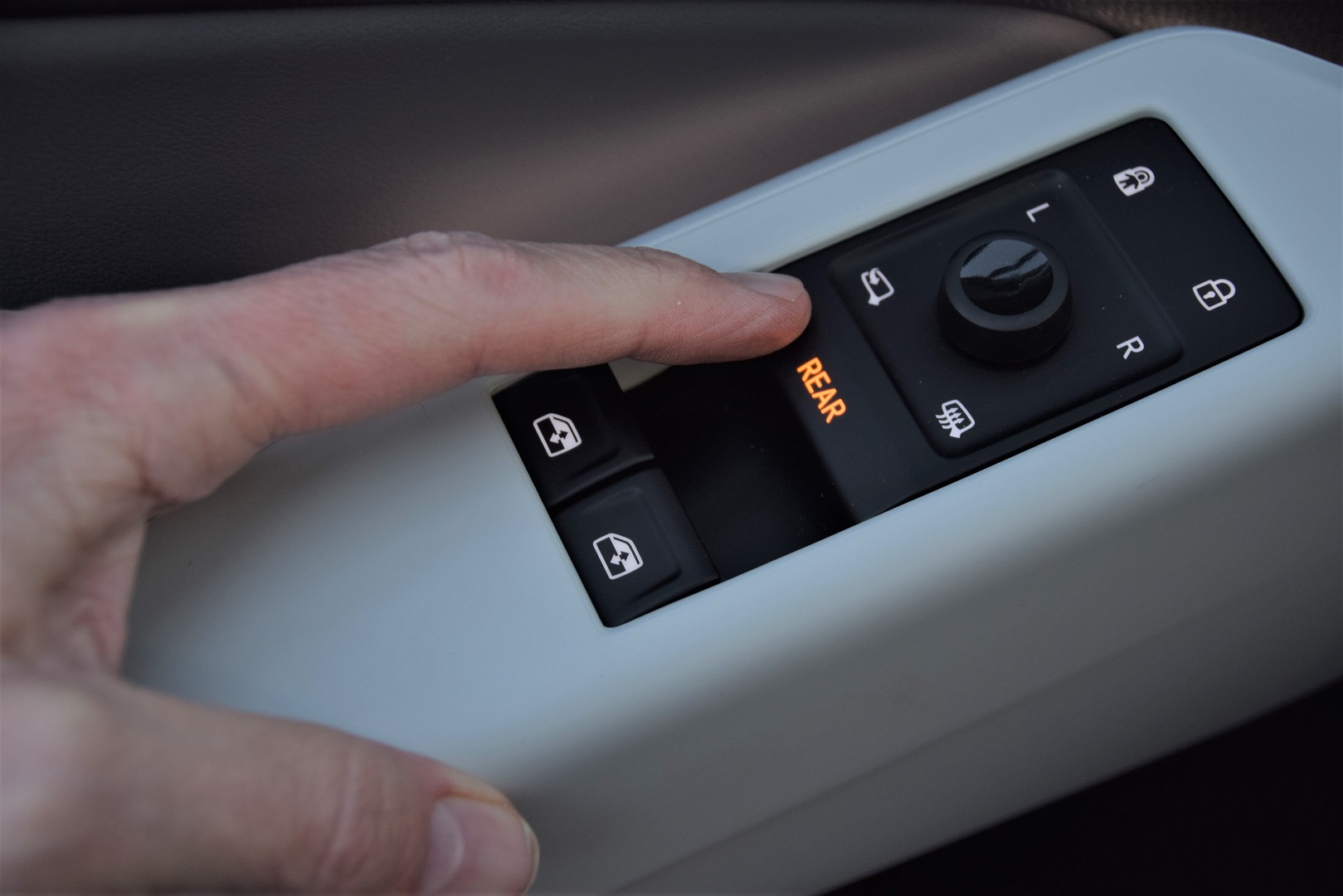 In a time when many vehicles are competing to see who can throw the most information at drivers and occupants, the ID.4 user experience is serene and uncluttered.

“It has fewer knobs and switches because they perform multiple tasks,” judge Drew Winter writes on his scoresheet. “A giant center console screen isn’t the star of the show. You can still access all the features and infotainment you want, but all the stuff you don’t need isn’t staring you in the face 24/7.” 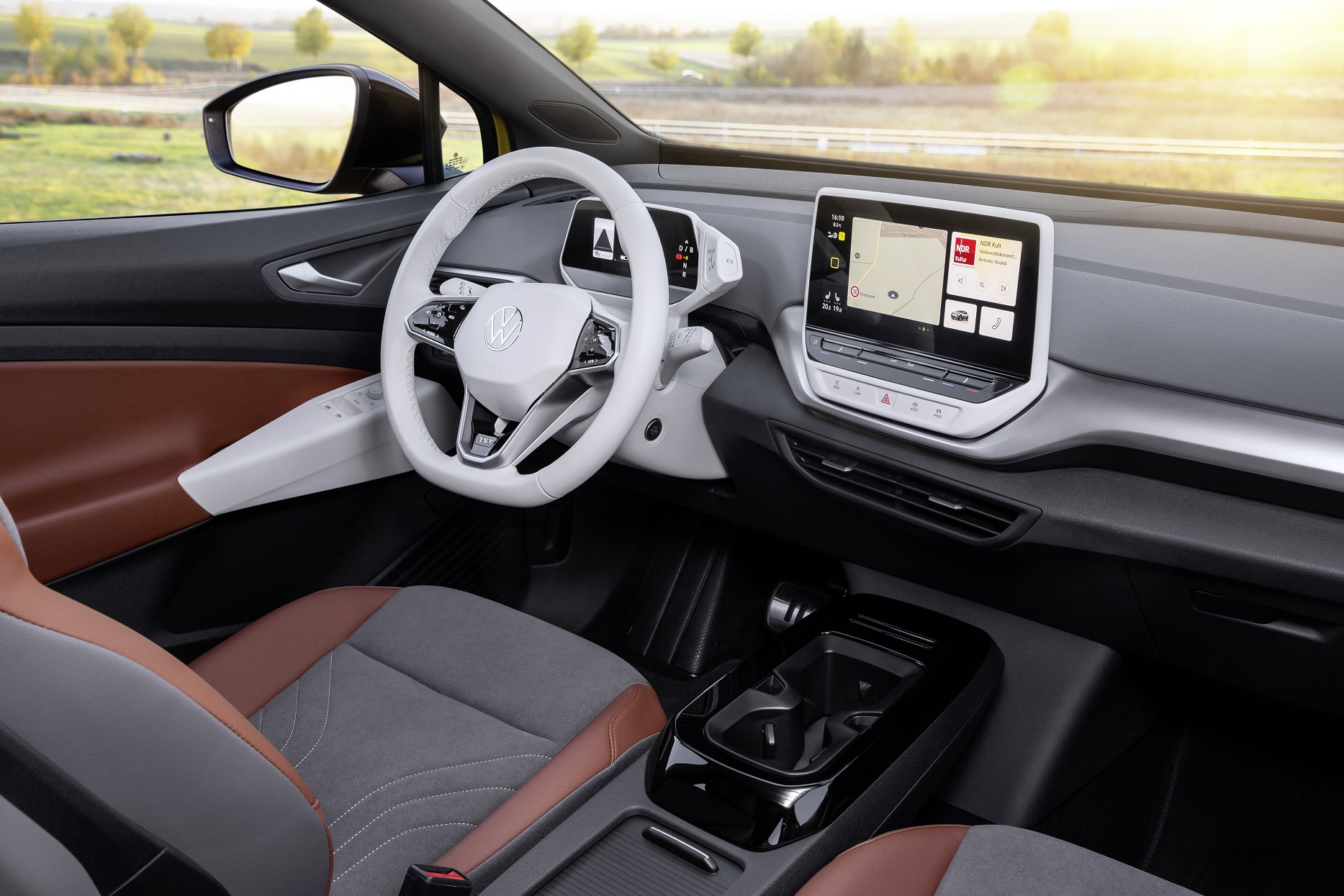 ID.4 with white and brown accents.