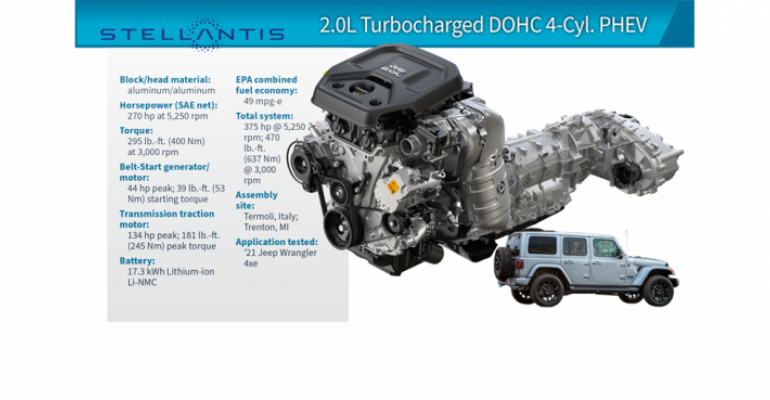 Wrangler 4xe is noteworthy for its rough-and-tumble off-road readiness, while clocking in at nearly 30 mpg during 300 miles of road testing around metro Detroit this past spring.

While nearly every automaker hatches ambitious plans for battery-electric vehicles, Stellantis – and before it, Fiat Chrysler Automobiles – appeared well behind the industry curve.

Its Fiat 500e BEV won a 2014 Wards 10 Best Engines trophy, but even then-CEO Sergio Marchionne badmouthed the subcompact as a compliance car that lost up to $20,000 for every unit sold. It was withdrawn from the U.S. market two years ago.

But since then, FCA and the new Stellantis have made progress with its 48V eTorque mild hybrid system, paired with 4-cyl. engines, V-6s and V-8 in trucks and SUVs. The 48V eTorque system helped the V-6 Ram 1500 win won two consecutive 10 Best trophies.

This year, the eTorque technology takes another step forward with a 400V plug-in hybrid system paired with the 2.0L twin-scroll turbocharged 4-cyl. in the ’21 Jeep Wrangler 4xe, which sails onto the 2021 Wards 10 Best Engines & Propulsion Systems list.

Now on sale in the U.S., Europe and China and assembled in Toledo, OH, the Wrangler 4xe (pronounced four-by-ee) is noteworthy for its ability to be the rough-and-tumble off-roader that generations of enthusiasts have adored, while clocking in at nearly 30 mpg (7.8 L/100 km) during 300 miles (483 km) of road testing around metro Detroit this past spring.

That’s a level of efficiency that Wrangler lovers have never seen before.

For me, the groundbreaking highlight of driving the Wrangler 4xe came on the highway, cruising along at 70 mph (113 km/h), glancing down at the instrument cluster and suddenly realizing the engine was not running. 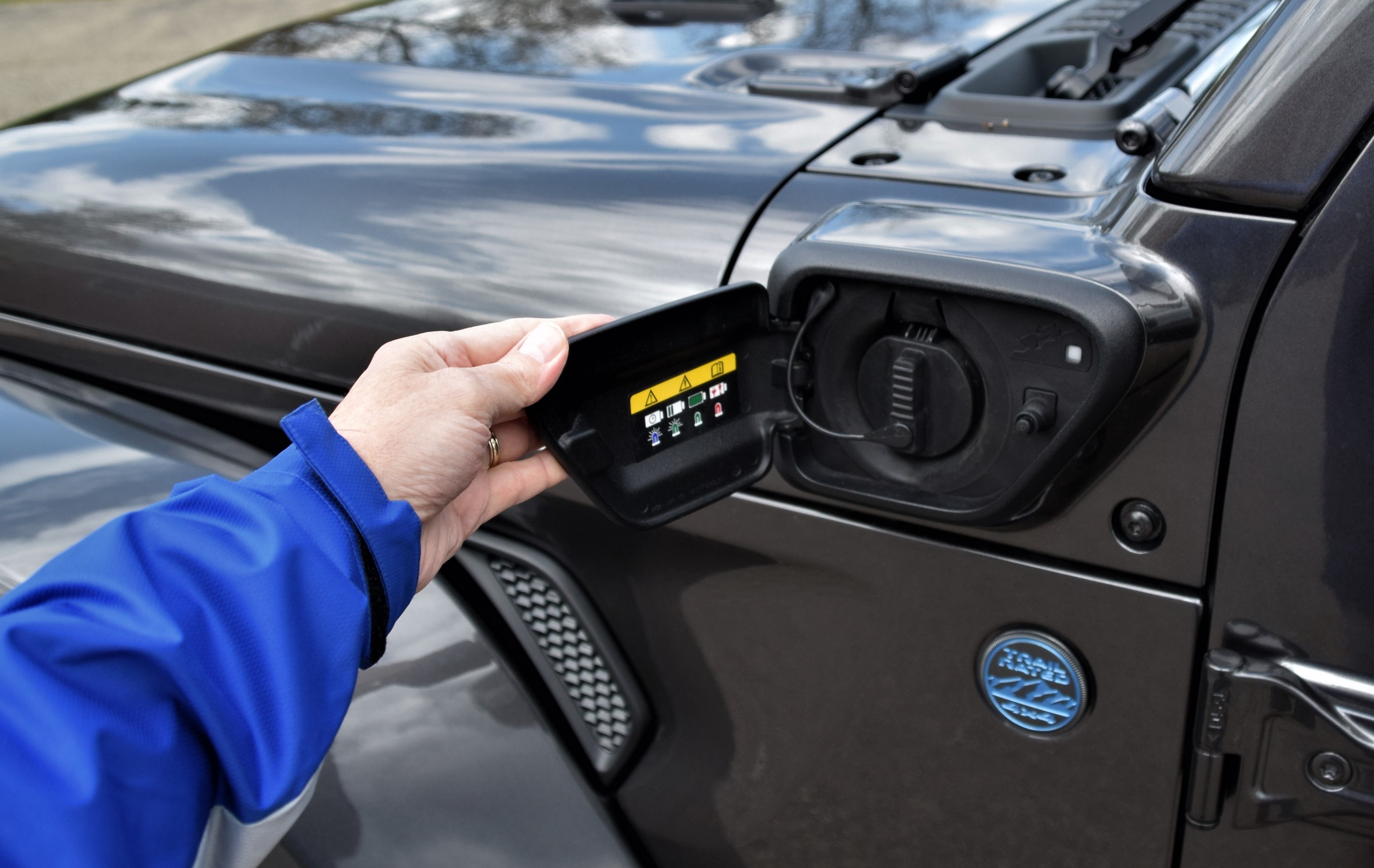 The impact on fuel economy and overall performance cannot be ignored.

“I think this is the superior Wrangler, given I’ve never liked how gruff most Wranglers sound,” says judge Christie Schweinsberg, who appreciates the greatly enhanced observed fuel economy, which could resonate in this market.

“Wrangler buyers spend a lot of time outdoors and I presume they are pro-environment. They seem to be a natural buyer group for a hybrid off-roader” she writes on her scoresheet. “I hope the 4xe ushers in a new era of cleaner and greener SUVs.”

While some judges thought the 4-cyl. was a bit loud when it cycled on, they all appreciate the overall packaging. “I think it has probably the best NVH of any Wrangler I’ve driven – at least from behind the wheel,” judge Dave Zoia writes on his scoresheet. “You certainly feel it when you step on it a bit and the engine kicks in and the transmission downshifts, but the transitions at steady state are not very noticeable.”

The entry price for this fuel-saving technology is $47,995 in Wrangler Unlimited Sahara trim, while the Rubicon 4xe trim starts at $51,695, plus $1,495 destination charges.

Sounds like a lot of money, but the 4xe is eligible for a $7,500 federal tax credit, plus other eligible state and local incentives.

The Jeep Wrangler has always been about crossing difficult terrain to enjoy the great outdoors. With the Wrangler 4xe, Jeep loyalists can still tackle rugged roads, but feel good about helping preserve their surroundings as well. 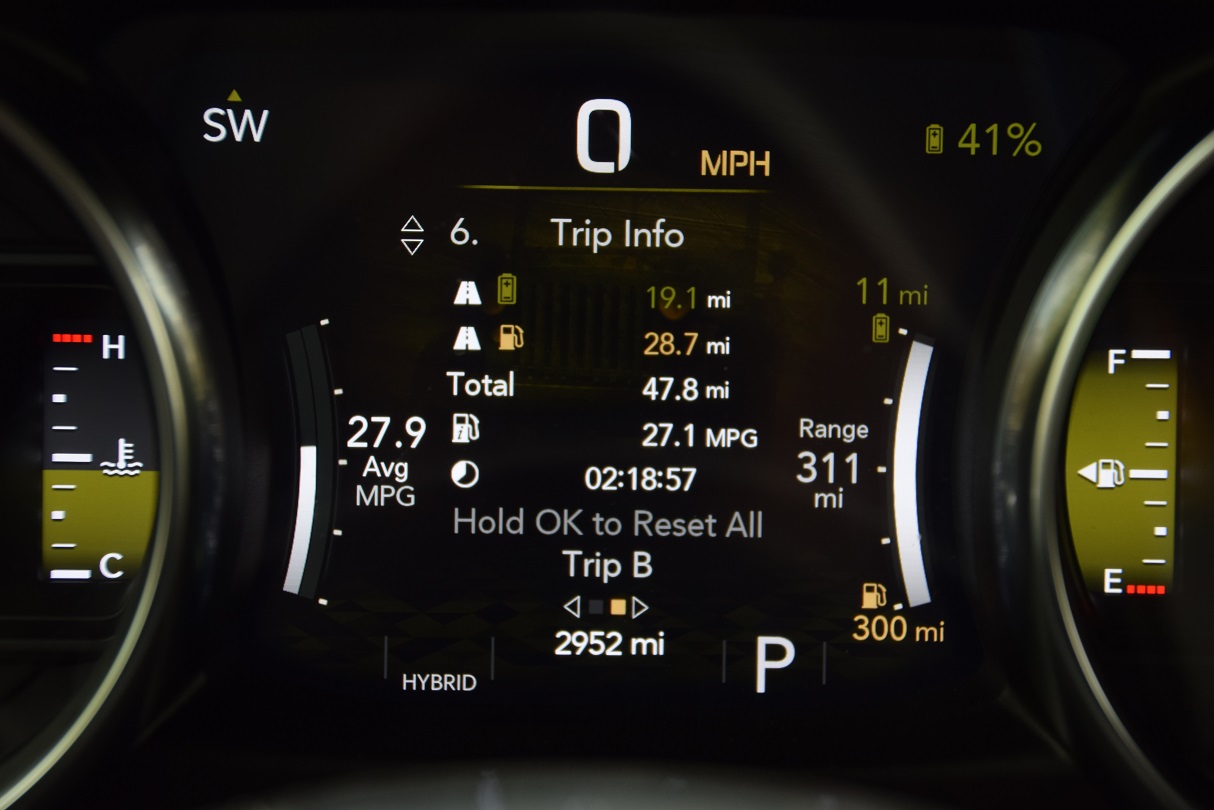