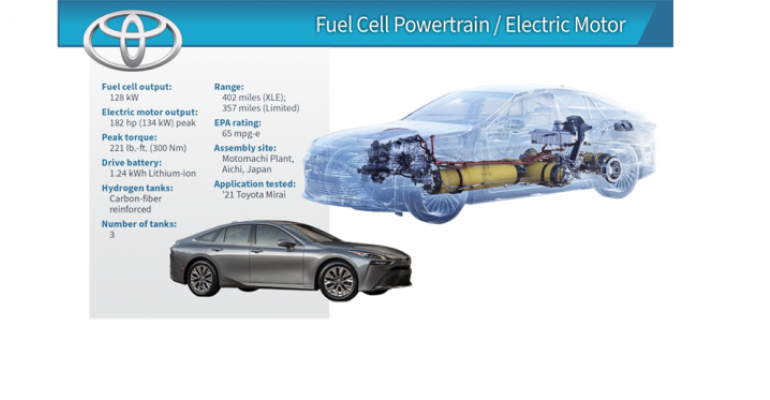 The Japanese automaker has not wavered in its pursuit of vehicles that can run on the most abundant element in the universe. The Mirai fuel-cell sedan is fun to drive and extremely quiet, not to mention handsomely styled.

The 2021 Wards 10 Best Engines & Propulsion Systems are being revealed in random, non-alphabetical order one per day until September 24. This is the fourth winner profile.

Such a quandary Toyota finds itself in – spending billions of dollars to develop fuel-cell cars whose marketability depends on a hydrogen fueling infrastructure that remains woefully inadequate, even in tree-hugging, gasoline-averse California.

And yet, the Japanese automaker has not wavered in its pursuit of vehicles that can run on the most abundant element in the universe. With deep R&D pockets, Toyota is playing the long game. After all, the name of its Mirai fuel-cell vehicle means future in Japanese.

For this commitment to a more stable environment – and for being a fine daily driver, to boot – the second-generation Toyota Mirai earns a 2021 Wards 10 Best Engines & Propulsion Systems trophy.

Yes, the Mirai is only available in California and Hawaii and U.S. sales through August amount to a meager 1,862 units, according to Wards Intelligence data. (Overseas, the Mirai is offered in Japan, U.K., Germany, Denmark, Belgium, Norway, The Netherlands, Sweden, France, Switzerland, Italy, Austria, Latvia, Spain and Poland.)

But limited availability did not keep the Hyundai Nexo or Honda Clarity FCVs off the list (three 10 Best awards between them since 2015).

That’s because fuel-cell vehicles remain a compelling technology, even as detractors say they will always be 10 years down the road.

Why the fascination with hydrogen?

Because petroleum is a finite resource that, when burned in combustion engines, creates emissions that contribute to climate change. Today’s popular alternative is a plug-in electric vehicle that requires lots of batteries that will create recycling challenges in the future, not to mention the emissions created by fossil-fuel powerplants generating the electricity necessary to run millions of BEVs.

Hydrogen is not a perfect fuel either – as most of it today is produced from fossil fuels. But cracking the emissions nut requires advances on multiple fronts, and hydrogen needs to be one of those.

Enough with the backstory. With 182 hp and 221 lb.-ft. (300 Nm) of torque, the Mirai is fun to drive and extremely quiet, not to mention handsomely styled inside and out.

“I’ve been testing FCVs and writing about them for at least 15 years, and the progress embodied by the Toyota Mirai is breathtaking,” writes judge Drew Winter on his scoresheet. “It has a spacious interior and a decent-sized trunk. Hydrogen tanks used to steal a lot of rear-seat room and trunk space.” 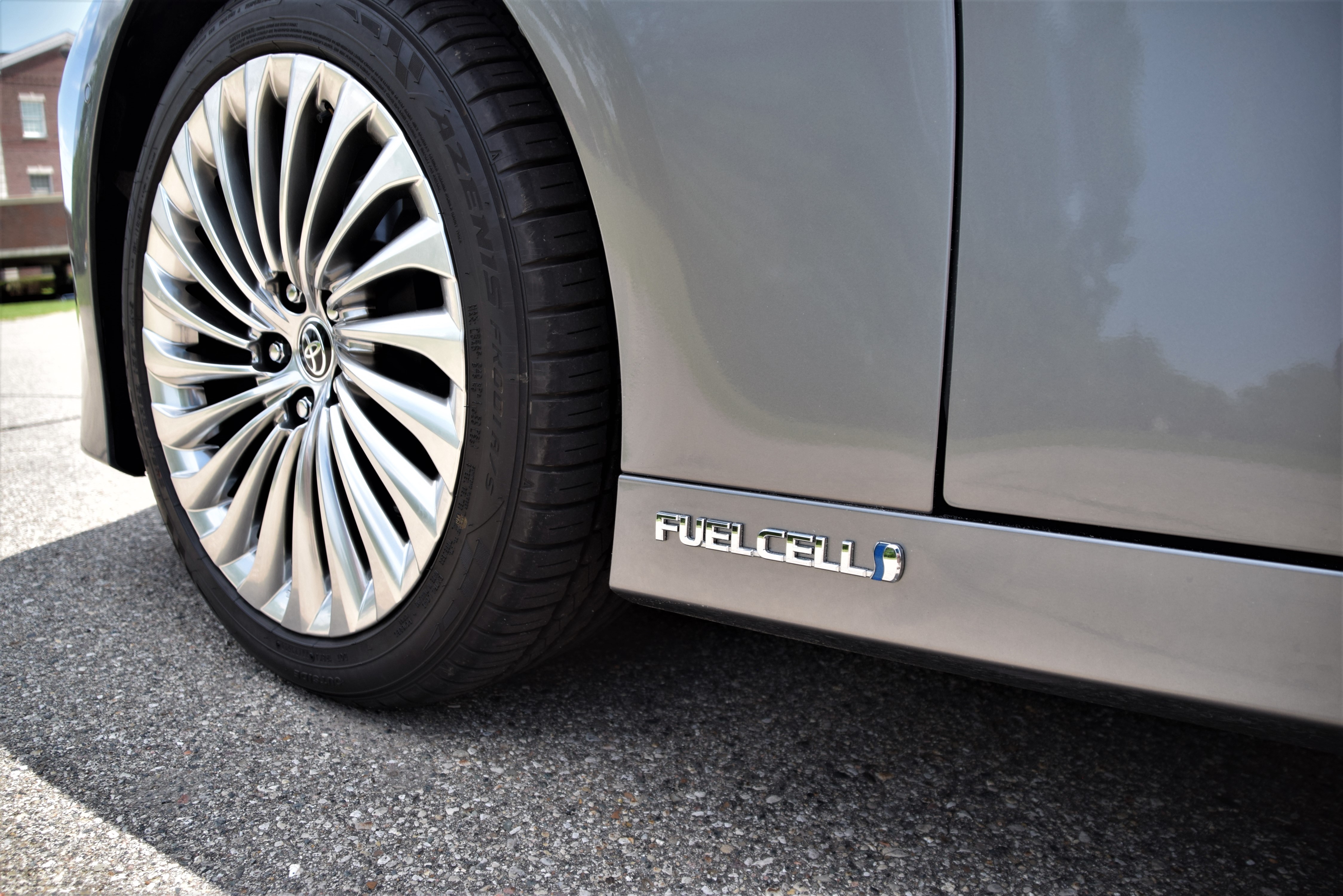 “At more than 400 miles, the range is better than all but the most expensive versions of BEVs,” he writes. “I guarantee the Mirai is significantly better than all of those in cold temperatures, and it can be refueled in about five minutes, faster than any BEV can charge.”

Judge Christie Schweinsberg finds the Mirai quieter than most BEVs we tested this year for 10 Best. “Hydrogen FCVs have come a long way because they used to create a racket,” she writes about the Mirai. “There’s no vibration in the accelerator pedal or steering wheel. Plus, acceleration is very linear.”

Driving enjoyment aside, that 800-pound gorilla is still sitting in the room, reminding us California is the only market for fuel-cell cars, with a refueling infrastructure many environmentalists consider inadequate.

The California Fuel Cell Partnership reports 47 retail locations currently open, from Lake Tahoe and Sacramento to San Francisco, Los Angeles and San Diego. There are 11 more under construction, 30 more in the permitting process and 15 more proposed.

That’s miniscule compared with the 10,000 gas stations in the Golden State, but it’s a start. Likewise, the Mirai makes up a tiny fraction of Toyota’s U.S. vehicle sales, and yet its on-road manners are competitive with its finest vehicles.

If this award factored in sales volume, the Mirai would be a marginal contender. But at its core, the Wards 10 Best is an industry award that recognizes technological achievement, which does not always equate with immediate commercial success. 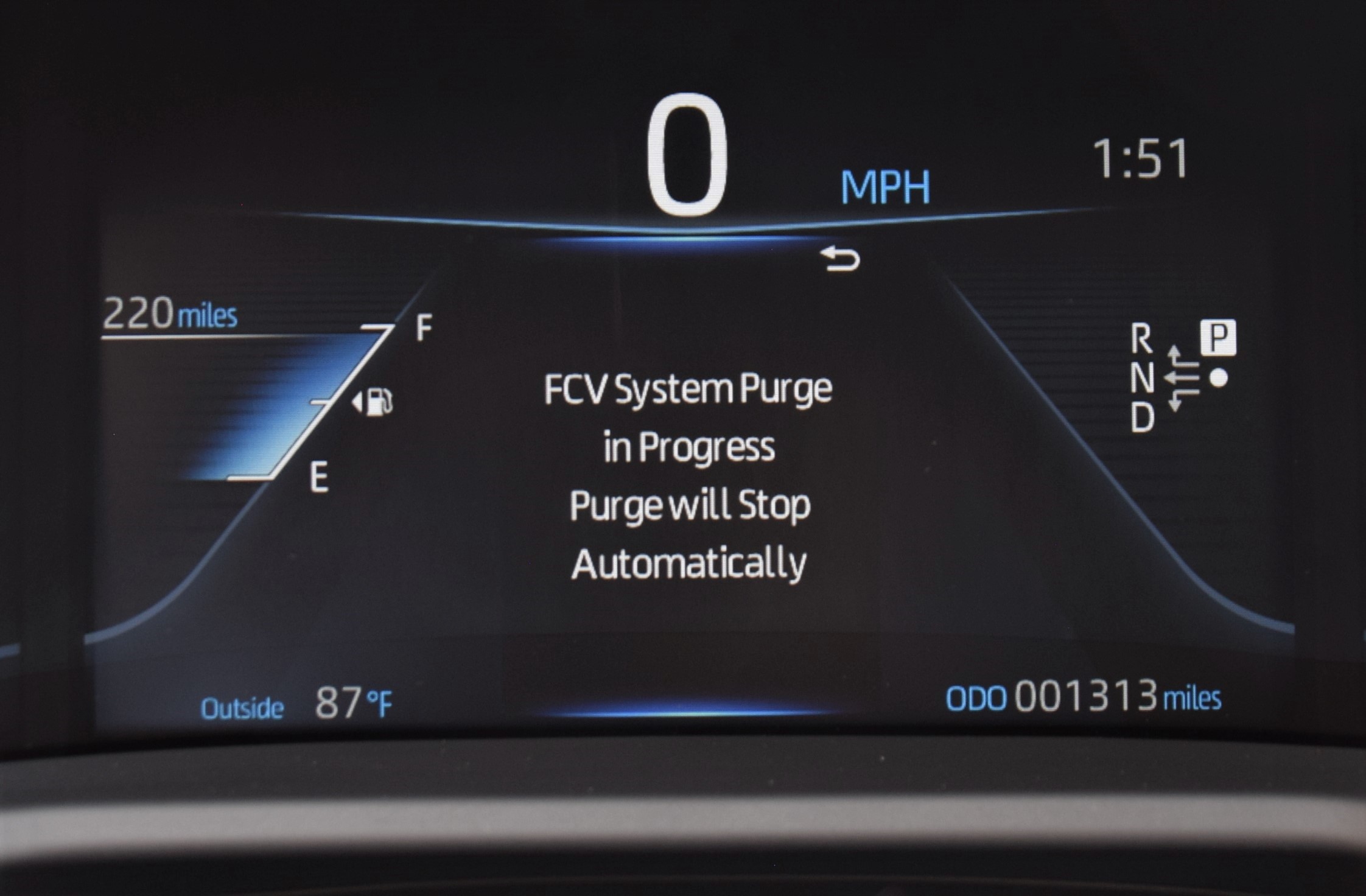