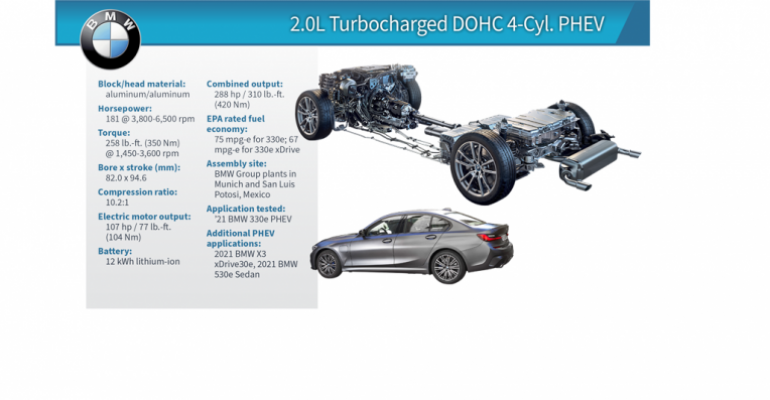 The 330e takes a great 4-cyl. turbo and adds an electric motor that kicks in an extra 107 hp and 77 lb.-ft. of torque to deliver a first-rate drive experience, while approaching 40 mpg during our real-world testing in metro Detroit.

The 2021 Wards 10 Best Engines & Propulsion Systems are being revealed in random, non-alphabetical order one per day until September 24. This is the seventh winner profile.

Our appreciation of Bavarian engines has been well documented.

BMW’s sterling, sublime inline 6-cyl. engines – in various states of tune and induction – are a big reason why the German automaker has won 36 Wards 10 Best Engines & Propulsion Systems trophies since the competition began in 1995.

This year’s winner, the 330e plug-in hybrid sedan, marks only the third such prize bestowed on a BMW 4-cyl. engine and the first for a hybrid from the brand. True, the i3 battery-electric won in 2015, and it offered an optional 0.7L 2-cyl. engine acting as a range-extending generator.

But the 330e comes in one configuration: a comfortable, sporty 5-seat 3-Series sedan with the B48 turbocharged 2.0L 4-cyl. engine and a 12-kWh lithium-ion battery pack that combine for 288 hp and 310 lb.-ft. (420 Nm) of torque, reaffirming just how exciting (and efficient) driving a hybrid can be.

If you’re skeptical, consider this: We tested two BMWs this year, the rear-wheel-drive 330e and the all-wheel-drive M440i coupe, powered by the deliciously stout 382-hp B58 3.0L inline 6-cyl. turbo, which has won several 10 Best trophies in recent years, including 2019 and 2020.

The smart money would have bet on the B58 6-cyl. completing the 3-peat by making the list again this year.

But there was little debate among Wards judges: The 330e takes a great 4-cyl. turbo mated to an 8-speed automatic transmission and adds an electric traction motor that kicks in an extra 107 hp and 77 lb.-ft. (104 Nm) of torque to deliver a first-rate drive experience that compromises nothing, while approaching 40 mpg (5.8 L/100 km) during our real-world testing in metro Detroit in May.

As good as the B58 turbo-6 may be, it won’t reach 40 mpg. And the 330e is more in line with where BMW (and its German rivals and the industry at large) is headed: toward a market that embraces electrification and gradually eases out internal-combustion engines.

We’re in no hurry to see a world without BMW piston engines, so the 330e represents a happy middle ground while the brand launches its iX and i4. Those battery-electric vehicles are bound to sell in small numbers, at least initially, and automakers such as BMW are wise to approach the market of the near future as a big tent, with room for whatever propulsion system is desired by consumers while also reducing emissions. 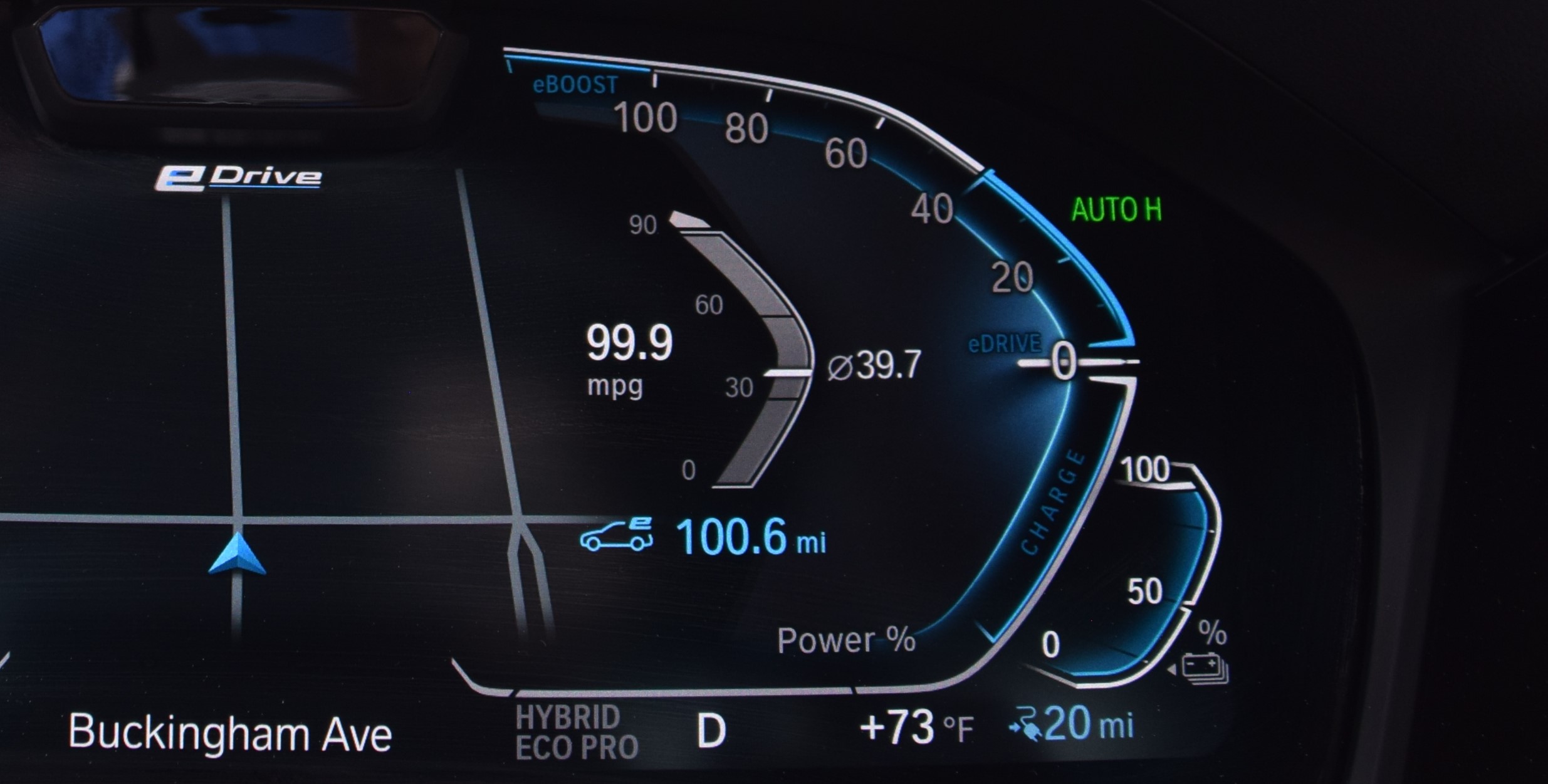 The hybrid battery pack is located under the rear seats and can be charged easily enough by plugging in to a standard 120V garage wall socket.

This powertrain configuration is shared with the larger 530e sedan and X3 xDrive30e compact CUV. But the smaller 330e sedan can sprint to 60 mph (97 km/h) in a quick 5.6 seconds, augmented by “XtraBoost,” which delivers 40 more hp for up to 10 seconds when the pedal is mashed. That extra 40 hp is factored into the 288-hp overall rating.

After time behind the wheel, the judges were impressed.

“It’s thrilling in EV mode and still engaging even when the battery runs dry,” judge Drew Winter writes on his scoresheet. “When the battery has juice, it drives like a premium BEV, not a PHEV. It feels really fast in sport mode. If you charge at home or work, you still get great fuel economy and can still have a lot of fun driving.”

Judge Dave Zoia says the gas/electric interplay is “imperceptible. And in hybrid mode, it makes considerable use of the battery if fully charged. Incredibly smooth and seamless delivery of power and torque.”

With plug-in hybrids like the 330e, perhaps government regulators will look more favorably on this efficient powertrain configuration. 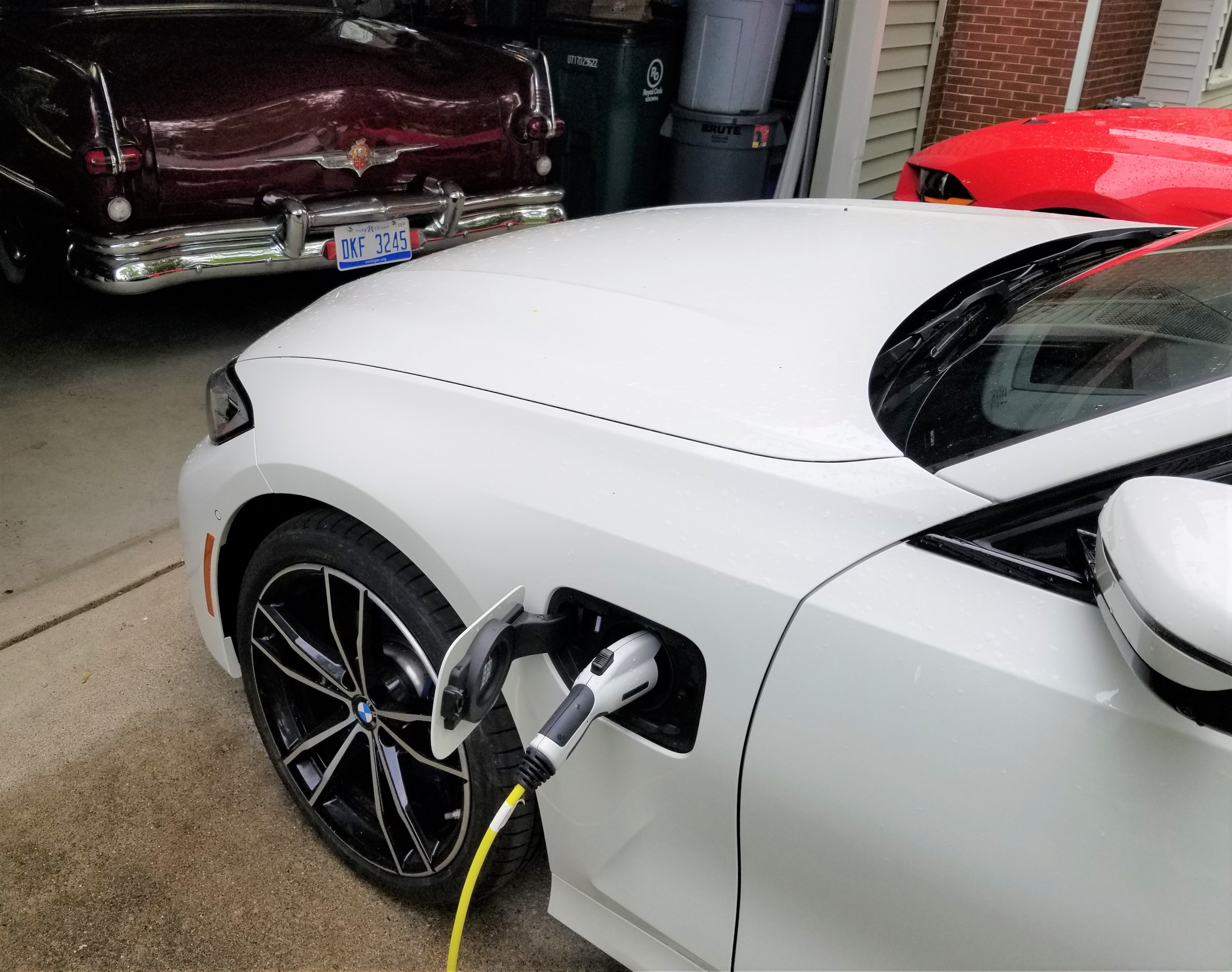