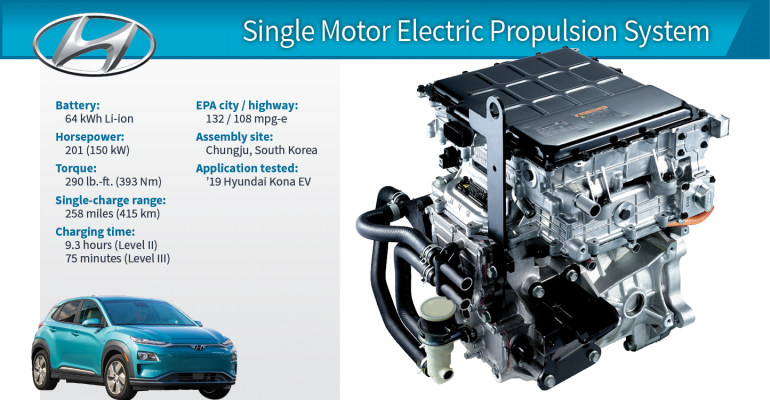 The Hyundai’s range is enough to get a metro Detroiter to the vacation hotspot of Traverse City, MI, (241 miles [386 km]), or a San Diegan to Santa Barbara (218 miles [351 km]), without needing to stop along the way and recharge, pending warm-ish weather and restrained accelerator inputs. Hyundai tacked on a variety of underbody panels and has unique wheel covers to improve the Kona’s aerodynamics and reduce drag at highway speeds.

Not only does the Kona Electric have great range – the longest among non-Tesla BEVs on sale in the U.S. – it also has a whopping 291 lb.-ft. (395 Nm) of instant torque from its 150-kW (201-hp) permanent magnet synchronous motor.

The Kona Electric’s torque is sent to the front wheels via a 7.981 axle ratio, higher than the Bolt’s 7.05 and, noted by our judges, enabling a quicker launch.

With so much low-end torque, it’s nearly impossible not to burn rubber upon takeoff in the Kona BEV.

“Screaming quick – and then you punch up Sport mode!” says Judge Bob Gritzinger, referring to the aggressive acceleration a driver can experience behind the wheel of the small CUV even when it’s in Comfort (i.e. Normal) mode for a more sedate experience.

Despite the slightly underwhelming Michigan charges, some of our judges were able to regenerate quite a bit of juice, expending fewer miles of range than miles traveled.

For instance, Judge Gritzinger drove the Kona Electric 72 miles (116 km) roundtrip, but only used up 52 miles (84 km) of range.

Drivers can adjust the level of motor drag, via regenerative braking paddles behind the steering wheel, from zero to three (none to strong). The default level is one, which slows but doesn’t stop the vehicle, unless it is traveling at a very low speed.

Holding the left paddle down brings the Kona Electric to a complete stop and is equivalent to about 0.25g of deceleration, the automaker says.

Hyundai claims the Kona Electric’s pack can charge from 0% to 80% full on a Level 3 DC fast charger in 54 minutes vs. the 1 hour 19 minutes it takes to charge the Bolt, thanks in part to a maximum charging threshold of 75 kW for the Kona vs. 55 kW for the Bolt.

And with more ultra-fast chargers coming online (Electrify America is installing hundreds of 150 kW or greater Level 3 chargers across the U.S. in the coming years) it’s getting easier to find a public place to plug-in.

Says Judge Drew Winter: “I fell in love with the Kona the minute I stepped on the pedal. This is a BEV consumers will want to buy – not to save the earth, but because it is fun, practical and, at $29,995 after applying the $7,500 federal tax credit, affordable.”