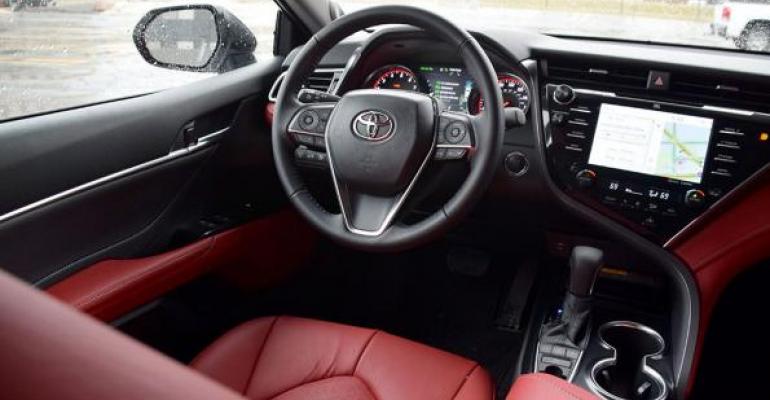 You feel right at home in the ’18 Toyota Camry. Interior designers intended it that way.

Taking a home-furnishing approach, they applied a mix of tones and hues throughout. The result is easy on the eye and comfy for drivers and passengers to sit back, relax and enjoy the ride – and the interior.

That artistic approach, an eye to detail, high degrees of functionality and onboard technology aplenty land the Camry on the 2018 Wards 10 Best Interiors winner’s list.

The Camry has come a long way since its 1982 debut when “utilitarian” was the word of the day. Years away were infotainment systems, head-up displays, pre-collision warnings, blindspot detection and all the other advanced driver-assistance systems (ADAS).

The cockpit in today’s Camry is sporty, not the stuff of yesteryear. The various readouts are informative without putting the driver into sensory overload. Gauges angle toward the driver. The other side is designed to give the front-seat passenger a sense of personal space.

A striking design visual is how the dashboard cowl line serpentines from the instrument panel to the passenger side of the center console. It clearly delineates the driver’s space. It also frames the infotainment/navigation screen and its accompanying controls.

In today’s advanced vehicles, it’s a challenge to cram in ever-more user-experience technology while at the same time making it easy and non-distractive to operate.

The Camry has nailed that in large part through next-generation displays. Information is relayed through three interlinked channels: a 10-in. (25-cm) head-up projection, 7-in. (18-cm) multi-information screen within the instrument cluster and an 8-in. audio/navigation/climate control panel. Smartphone-like icons aid ease of use.

Behind all that is “an entire suite of ADAS technology that ought to be in all cars in this price range,” says editor Jim Irwin. (our test vehicle stickered at $39,253.) “The ADAS features alone make it a good value.”

Product designers paid much attention to detail, from impeccable seat stitching to horizontal-strip metallic accents on the door panels.

The front seats look like a mobile version of upscale easy chairs. They blend comfort and craftsmanship. They give La-Z-Boy a run for its money.

And the sun shines in for everyone: front- and rear-seat occupants get their own sunroofs.

For years, Camry has been Toyota’s star car with consistently strong sales. The sedan for years has held the No.1 spot for passenger cars in the U.S. where deliveries tallied 387,081 in 2017, according to Wards Intelligence data.

Despite its success on the sales front, some critics rap the Camry design for playing it too safe, likening it to vanilla at a 31-flavor Baskin-Robbins store.

The new interior puts an end to such criticism. Ironically, some detractors now say it is too daring. We think so, too, but in the best sense of the word. As one judge says, “Finally, an interior with some color that pops.”