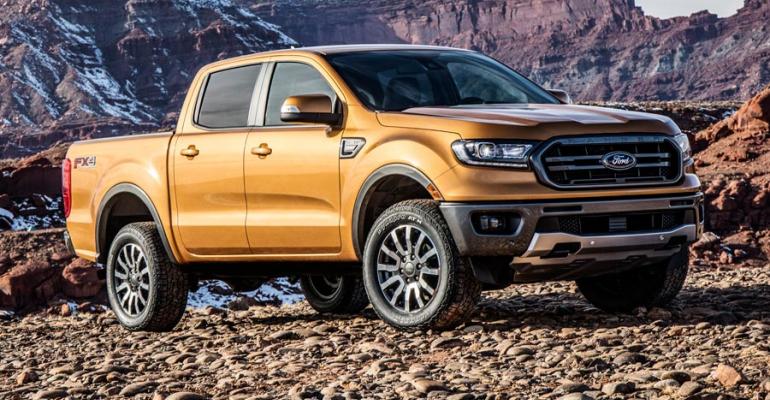 Ford&rsquo;s Ranger pickup returns to the U.S. market a year from now after a seven-year hiatus during which the midsize truck&nbsp;segment has exploded.

Close examination will reveal miniscule variances between the ’19 Ranger for the U.S. market and the ones Ford sells globally, and those tiny differences speak volumes about the kind of quality the Dearborn automaker is building into its new midsize truck.

Ford reveals the all-new Ranger today at the North American International Auto Show, a year ahead of putting the pickup on sale in early 2019 alongside America’s best-selling vehicle, the F-Series pickup.

Ford says tolerances are up to 11% tighter, although the improvements are not apparent to the naked eye. The gap between the fender and front door is reduced 0.008 in. (0.2 mm) while 0.02 in. (0.5 mm) is shaved between the front and rear doors (on the Super Crew), leaving a space of just 0.16 in. (4.0 mm). In addition, the team also slightly tightened some radii to make the gaps appear even tighter.

The retooling is part of the $850 million investment Ford announced last March to revamp the Michigan Assembly Plant to build the Ranger and all-new Ford Bronco. The truck also gets an aluminum hood and tailgate and steel bumpers for this market.

The Ranger will come in three trims – entry-level XL, mid-level XLT and premium Lariat – with optional Chrome and Sport appearance and FX Off-Road packages, and in SuperCab extended cab or SuperCrew 4-door configurations. Bed lengths of 5 and 6 ft. (1.5 and 1.8 m) are available.

Unlike the more workaday buyer of an F-Series, Ranger owners will use the truck “to enhance their passions – to help get them off the grid,” says Todd Eckert, marketing manager-Ford truck group. “The Ranger will not just carry their adventure gear. It will be a part of their adventure gear.”

The Ranger already is a best-seller in Europe, South America and New Zealand and is the second-best-selling midsize truck globally, Eckert says. Ford pulled the truck from the North American market in 2011, and the automaker has been on the sidelines as the midsize truck segment has grown 83% since 2014 to 452,000 sales last year, he notes.