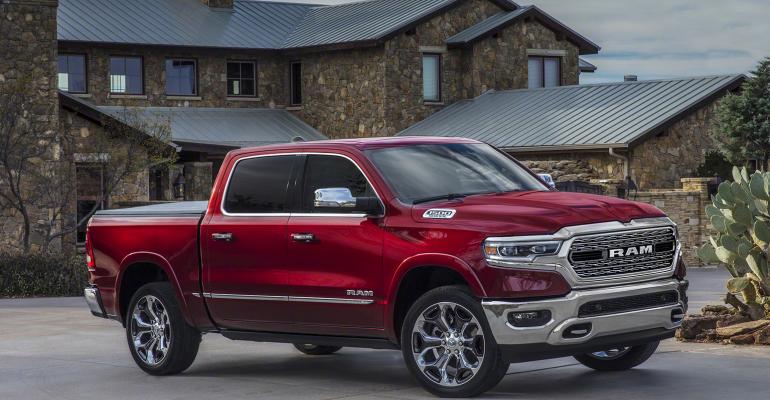 Ram Reloads for Next Round of Truck Wars

FCA&rsquo;s fullsize Ram 1500 pickup gets a complete makeover for &rsquo;19, dropping weight and adding mild-hybridization in a bid to improve fuel economy. The latest Uconnect interface debuts, featuring a 12.0-in. split-screen display.&nbsp;&nbsp;

DETROIT – Gone are the signature crosshair grille and exaggerated “big rig” drop fenders, replaced by a lighter, more aerodynamic and fuel-conscious ’19 Ram 1500 pickup making its debut at the North American International Auto Show ahead of a first-quarter launch.

The light-duty truck’s first ground-up redesign since Ram became a stand-alone brand in 2009, the pickup is all-new from its Ram’s head logo – now more “Transformer”-like – to its hybridized V-6 and V-8 powertrains, high-strength-steel frame and spacious, plush interiors.

“The Ram 1500 stands out as the benchmark in a very competitive segment,” says Mike Manley, head of Ram Brand. “The all-new ’19 Ram 1500 delivers a no-compromise approach to the fullsize truck segment with strength, durability, technology and efficiency.”

The fifth-generation Ram builds on the previous model’s distinctive differences, including its coil-spring (or optional adjustable air-spring) suspension and its time-tested 3.6L Pentastar V-6 and 5.7 Hemi V-8 engines. The suspension gets new Frequency Response Damping shocks that provide a suppler ride and engines now are electrified for fuel efficiency.

Lovers of the Ram’s bold crosshair grille and pronounced front fenders might be put off, but the new truck’s more integrated headlights and flowing hood lines and horizontal mesh face with hidden active grille shutters contribute to a 9.0% reduction in drag and what FCA says is a class-leading 0.357 coefficient of drag. Prominent “RAM” lettering centers the forward-leaning grille.

Overall, the truck is 4 ins. (102 mm) longer with a 4-in. longer wheelbase, and all the extra length goes into the rear passenger compartment. FCA credits the extra length, a 0.5-in. (13-mm) increase in width and a 1.5-in. (38-mm) hike in bed-rail height with aiding the truck’s aerodynamics.

Weight is down nearly 225 lbs. (102 kg) through the use of aluminum for the tailgate, engine mounts, front-axle center, front suspension and transmission crossmembers and the electric power-steering system gear. Some 100 lbs. (45 kg) is saved by employing hydroformed high-strength steel in 98% of the frame.

Inside, everything is bigger and more spacious, starting with the extra cabin length and wider door openings. The Ram’s popular, weathertight in-floor RamBins are now 5 ins. (127 mm) larger, while the load floor is totally flat. The rear seats now slide up to 3 ins. (80 mm) and recline up to eight degrees.

But the biggest changes come in the front cabin, centered by FCA’s first installation of a huge 12.0-in. (30-cm) reconfigurable split-touchscreen running the automaker’s fourth-generation Uconnect system.

“It’s essentially two 8.4 (in. screens) on top of each other,” says Ryan Nagode, chief interior designer. The setup can be configured, for instance, to display Apple CarPlay on one screen while another native function, such as climate control, is shown on the lower screen. Smaller 8.4-in. (21.0-cm) and 5.0-in. (13.0-cm) displays also are offered, depending on trim level.

The new Uconnect system supports Apple CarPlay and Android Auto along with 4G Wi-Fi for up to 10 devices within 50 feet (15 m) of the vehicle. The instrument cluster provides driver information via 3.5-in. (9.0-cm) or 7.0-in. (18.0-cm) color displays.

Amid all the interior upgrades, the slickest new feature may be the truck’s upper-glovebox door, that slides back into the instrument panel when opened.

Powering the new Ram are two heavily revised engines, both offered with FCA’s eTorque mild-hybrid system to provide stop/start capability and added torque. The eTorque system is standard on the 3.6L V-6 and available on the 5.7L V-8.

The 48V system uses a belt-driven motor-generator powered by a 330-Wh lithium-ion nickel manganese cobalt-graphite battery. Power is converted to 12V to run other systems and charge the truck’s 12V lead-acid battery.

FCA says the V-8 will be available at launch, followed by the V-6 in the summer, with the 3.0L diesel arriving the following year.

Both port-injected engines feature fuel shut-off on deceleration to improve efficiency, while the Hemi is equipped with cylinder deactivation. New for ’19 is a pair of active vibration dampers attached to the frame of V-8 models that work with the in-cabin active noise cancellation to reduce engine drone, allowing the cylinder deactivation to operate in a wider range. FCA says the broader zone results in an extra 0.5-mpg (0.2 km/L) in highway driving.

Both engines are mated to 8-speed automatic transmissions with 2- and 4-wheel-drive available. FCA says the gearboxes are tuned with more than 40 shift maps to optimize performance and fuel efficiency depending on driving conditions.

FCA’s Ram pickup traditionally holds down third place in the U.S. truck wars behind the perennial champion Ford F-Series and the Chevrolet Silverado, but last year the long-in-the-tooth fourth-generation model posted its best sales ever, up 2.1% to 483,520 units, according to WardsAuto data.