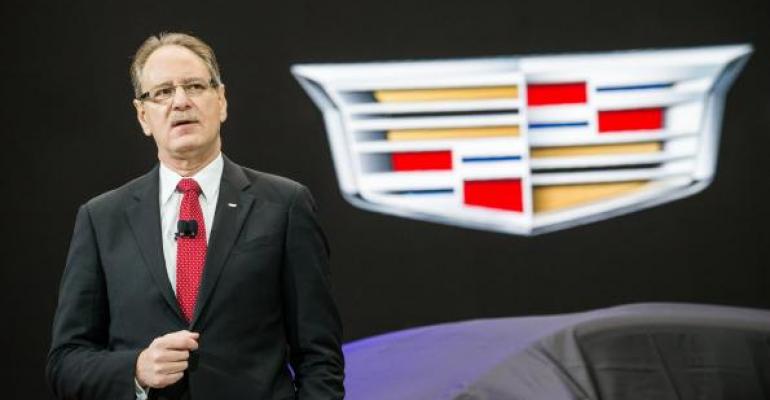 &ldquo;Things are about to get very interesting at Cadillac,&rdquo; Johan de Nysschen says. &nbsp;

NEW YORK – Heads up, a halo vehicle is coming from Cadillac at some point, says Johan de Nysschen, president of General Motors’ luxury brand that is vying  to recapture the glory days.

“We will produce a halo vehicle, and when it comes it will stun the world,” he says at the 2018 Automotive Forum sponsored by J. D. Power and National Automobile Dealers Assn. The event is held in conjunction with the New York International Auto Show.

“Things are about to get very interesting at Cadillac,” de Nysschen says of product ahead.

He didn’t indicate when the special vehicle might make the scene, but Cadillac on the eve of the auto show introduces its first-ever compact CUV, the XT4.

Some industry people – including some Cadillac dealers – have rapped the brand taking its time in offering enough CUVs and SUVs. Those segments are hot, cars are not. Cadillac currently offers two utility vehicles, the XT5 and Escalade.

“The world does not need another large-box conventional sedan,” de Nysschen says.

Plans call for “a new (vehicle) launch every few months through the end of 2021,” he says.

He credits Cadillac’s more than 900 retailers for making it through hard times. “To our dealers, thank you for your tenacity and endurance.”

Cadillac once was the No.1 luxury brand in the U.S. The decline came because of a “sustained attack” by European and Asian luxury brands, says de Nysschen who once worked for Audi and Infiniti, German and Japanese luxury brands, respectively.

That assault and Cadillac’s “lack of access to global markets prevented us from generating enough revenue to invest in new product,” he says.

In year four of a 10-year revival plan, he says GM “has given us the luxury and the mandate to fix Cadillac.”

Much of the effort is centered on China, where the brand now is the No.4 luxury brand. Sales exceeded 172,000 units there last year and are expected to exceed 200,000 this year, he says. “We’ve turned China into a second volume hub.”

Global sales last year were 356,469 units, close to what they were in 1978 (360,825) when the brand was U.S.-centric and led the American luxury segment. Then came the decline as Mercedes-Benz, BMW and Lexus ate away at Cadillac’s market share.

“The volume erosion is over,” de Nysschen says, vowing “2018 will set an all-time high-water mark.”