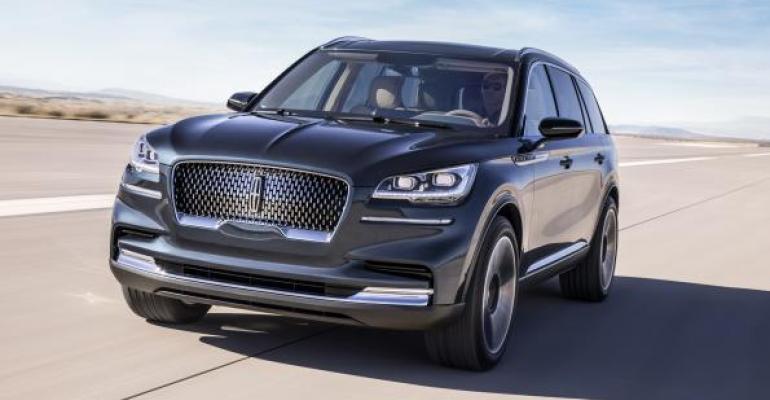 Too often, vehicles in the upscale SUV market look like they are on the attack, says Lincoln design chief David Woodhouse.

NEW YORK – Don’t look for the all-new Lincoln Aviator SUV to appear as a product-placement vehicle in a freaky science-fiction film.

Lincoln instead went for seductiveness and calmness in designing the rear-wheel-drive vehicle, David Woodhouse, the Ford luxury brand’s design director, says at a media event here before the official unveiling at the New York International Auto Show.

Too often, vehicles in the upscale SUV market look like they are on the attack, he says. “They reflect aggressiveness and masculinity. The Aviator doesn’t look like a predator in a sci-fi movie. It’s more about seduction.”

The vehicle goes on sale next year, says marketing chief Robert Parker who isn’t more specific than that. The plant that will build it is to be announced.

In Lincoln’s SUV lineup, the 3-row Aviator is positioned below the fullsized Lincoln Navigator and above the upcoming Nautilus (the MKX replacement).

“There was a huge hole the Aviator fills” in the lineup, Woodhouse says.

A working tagline for the Aviator is, “Seduced by beauty.”

In a converted garage in lower Manhattan, Woodhouse takes journalists on a display-to-display tour of artwork (such as a Martha West painting of a graceful dancing woman) that inspired Aviator designers. Because of the vehicles name, not surprisingly the sleekness of aircraft also played a part in the styling of the vehicle.

“In Aviator, the lines of the vehicle are streamlined,” says Woodhouse. “You have the stature and presence of the grille at the front, then the body and tail taper off – creating a distinct aerofoil analogy.”

Lines pull downward toward the rear – intended as a cue to Aviator’s new rear-wheel-drive platform – in what Woodhouse calls an in-flight gesture.

“If you look at a bird or plane in flight, the wing is always at an angle to the air and falling downward toward the rear,” he says.

The product development decision to make the vehicle RWD reflects “every designer’s dream,” from a structural basis, Woodhouse tells WardsAuto. “Luxury design is all about the bones, the skeleton of the vehicle.

The design mantra for the Aviator was “longer, lower, leaner,” he says, adding “the more horizontal lines and the longer, the better.”

But the Aviator was developed to be more than just a pretty SUV. Lincoln has laid on the technology.

Check off all the advanced safety features. In addition to front collision avoidance automatic emergency braking, there is a similar system that stops the vehicle if the driver unknowingly is backing up and about to hit something.

Aviator marks the first time Lincoln will offer a plug-in hybrid model that is capable of using its twin-turbocharged engine if needed. The match-up is intended to offer enhanced fuel economy, abate range anxiety (when the engine power kicks in) and avoid powertrain-induced noise and vibration when the vehicle operates on a battery charge.

He points out another novel tech feature: Owners will be able to use their smartphone as a key, allowing clients them to lock and unlock the vehicle, open its trunk and start it. (Conventional key fobs still will come with the vehicle.)

The Aviator represents Lincoln’s “pivot to utility vehicles, because we see those as the heart of the luxury market,” Falotico says, adding “a rear-wheel-drive platform is important for a utility vehicle.” The Aviator is the first application of the new platform. It’s expected to also carry the next-generation Ford Explorer.

She adds that grow in that segment is fueled by Millennials in their 20s and 30s. That’s an irony because Millennials once were decried as a generation that wasn’t interested in buying cars, let alone luxury SUVS.

Millennials are among automotive consumers who are migrating to the 2-box design of SUVs and away from the 3-box design of cars, Parker says. The evolution of SUV design “has been fascinating,” Woodhouse says.

The Aviator will appeal to shoppers looking for a good-sized SUV “but aren’t interested in going up to a larger utility,” such as the Navigator, says John Davis, the Aviator’s chief program engineer.

Competitors will include the Acura MDX, the Audi Q7 and the Volvo XC90.

Here’s Why Lincoln Navigator is North American Truck of the Year
Jan 15, 2018