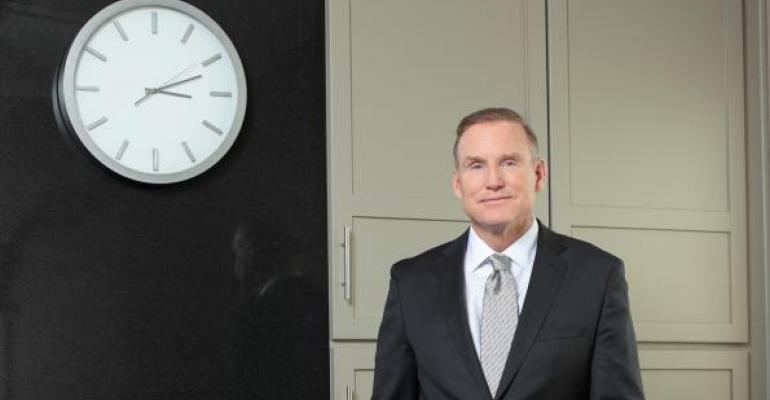 <p><strong>&ldquo;I talk to my customers every day, and then I look at what Washington and Detroit are talking about, and I see a real disconnect,&rdquo; says Lutz.</strong></p>
Dealers>NADA Convention and Exposition

New NADA Chairman: ‘If Our Customers Want It, We’ll Sell It’

In a WardsAuto interview, Lutz speaks about his chairmanship plans for the year. Here is an edited version.

WardsAuto: What are the NADA’s legislative priorities for 2018?

Lutz: We’re going to be very focused on the efforts to regulate the development of autonomous vehicles, promote ride-sharing services, and push electrification into the market.

Although we’re years away from broad availability and market acceptance of these things, we’re making decisions today in Washington that are going to impact where we head tomorrow. That’s important, because what I see is a lot of misreading by not just the government, but also by the industry, about how willing consumers are to give up their vehicles, give up control of their vehicles, and give up vehicles with internal combustion engines that are more efficient, safer, and more in line with consumer preferences than we’ve ever seen.

We’re dealers. We’re product agnostic. I don’t care what the drivetrain is. If our customers want it, we’re going to want to sell it. But I think in the short term, you’re going to see dealers become front-line advocates for our customers in these areas specifically because the government and the industry are in many respects way out ahead what the average consumer wants in terms of autonomy, ride-sharing and electrification.

I talk to my customers every day, and then I look at what Washington and Detroit are talking about, and I see a real disconnect. So we’re going to be an important advocate for the consumer, speaking up for them about what they really want and what they’re really asking for, probably for the next several years.

WardsAuto: How will the tax bill that President Trump just signed affect dealers? How big a benefit is the 100% deductibility of floorplan interest?

One thing that's going to be beneficial is having a 21% corporate rate. You’re going to see dealers leave more money in their businesses, and with a 100% write-off on expenses for capital purchases, It could be a good year for the suppliers. When you can expense a piece of equipment the year you buy it, that's quite a tax incentive.

Retaining the ability of dealers to continue to deduct interest paid on our floor plan loans was huge. Floorplan interest is typically one of the three biggest expenses a dealer has, outside of payroll and advertising, so the ability to deduct that interest as an ordinary and necessary business expense is a cornerstone of the franchised dealer business model. Without that interest deduction, dealers could have had to pay taxes on that interest in years when profits were squeezed. And even in good years, we could have easily seen a scenario where dealers looked at the tens of millions of dollars of floorplan loans they have and said, “You know, maybe I need to order fewer vehicles, and carry less inventory, if I can no longer deduct the interest on this loan.” The potential ripple effects that could have had up the supply chain and across the economy could have been devastating.

WardsAuto: NADA predicts 2018 will be a “robust year” for vehicle sales. What are dealer opportunities and challenges? Has profitability improved?

Obviously, the number of lease returns will put a lot of pressure on new-car sales, and used-car sales will likely increase because of the influx of late-model, lower-priced trade-ins returning to the market. But there’s also a great opportunity because we are a little over capacity on the new side right now. The key for dealers will be properly managing their inventory.

WardsAuto: How are dealer inventories aligning with customer demand in 2018? If you haven’t reached a “sweet spot,” what still needs to be done?

Lutz: Right now, based on everything I’m seeing, they're pretty much in line. But remember we've got some pressure on interest rates going up. And interest rate increases this year could affect car sales.

WardsAuto: In a recent Wall Street Journal op-ed, new Consumer Financial Protection Bureau Director Mick Mulvaney said his agency “work[s] for the people…who buy cars … and sell them.” What impact will that agency’s re-direction under Mulvaney and President Trump have on dealers?

Lutz: What the CFPB did in attempting to prohibit dealers from being able to offer consumers discounted credit in the showroom was grossly unfair. Not only that, it was hurtful to the consumer. It tied our hands, and we were able to get fewer people financed because of the inflexibility of the programs the CFPB was pressuring lenders into using. And we had little recourse initially.

The biggest difference we see now is that this administration does not think they have all the answers. They don't know that what the consumer wants, and they admit that. The last administration felt they knew better than anyone about what consumers wanted and what consumers needed, and then they would make decisions unilaterally and ram them down everyone’s throat.

This administration is not doing that. I can’t fault the last administration for not doing what they thought was right. But I can and do fault them for not listening to anybody who said, ‘Actually, no, you’ve got it completely wrong.’

WardsAuto: What decision do you expect from the U.S. Supreme Court in the Encino v. Navarro case involving overtime pay for service advisers? Explain NADA’s position on this case.

Lutz: Our position is that service advisers are plainly salespeople, and what they sell, and what they are primarily engaged in, is the servicing of automobiles. That means that the nation's 100,000 service advisers plainly fall within the FLSA exemption for any salesman, parts man, or mechanic primarily engaged in selling or servicing automobiles.

The exemption has allowed dealerships to compensate service advisers, who are engaged in the sale of service solutions to dealership customers, based substantially on their sales productivity rather than on the number of hours they work. These compensation arrangements benefit both dealerships and employees. Service advisers are generally well paid for their contributions to dealership revenues. We certainly hope the court agrees with our position.

WardsAuto: How does the relationship between NADA and the OEMs stand in the pursuit of “open and constructive dialogue?”

Lutz: We’ve had great conversations with OEMs that they’ve evaluated what we’ve said about some of their marketing strategies and have made changes. That’s positive. The progressive OEMs that are customer-centric are evaluating things like stair-step incentive programs and the effect they have on their brand and on the consumer. Progressive-thinking OEMs are saying, “We should take a look at this. There might be a better way out there to do this.”

Just do an honest evaluation of whether it’s in the consumer’s best interest. Because I think they'll come to the realization that it is not.

WardsAuto: NADA has called stair-step dealer incentive programs “the elephant in the room.” What progress has been made in addressing this issue with manufacturers?

Lutz: We’ve made great progress. It is manifested in some of the OEMs changing their programs. We know it’s not our role to tell the manufacturer how they should retail cars or how they should run their marketing programs, but as partners we should say, “Here's the research that we’ve done. This is why it's not good for the consumer. This is how it hurts your brand.”

Make them aware of that. Have an open dialogue so they say, ‘I can see how that does affect our customers, and how that does erode our brand, and we need to be cognizant of that and look for maybe other ways to accomplish our goal of selling vehicles without having those two things happen.”

Because ultimately, if the consumer is not happy because they think they’ve been mistreated, they're not coming back. So as an OEM, you may move that car or you might move that one additional unit, but you may lose a customer for life because of it. That’s why most dealers don’t believe stair-step incentive programs are a good thing.

WardsAuto: How do NADA and its dealers feel about the future of autonomous cars and mobility?

Lutz: We’re truly excited about autonomous vehicles and ridesharing services because we believe they’re going to be additive to the personal transportation options that people have.

I ask customers this question all the time: “Are you looking forward to a day when you no longer have to own a car?” And no one has ever said, Yes.” They truly love the freedom and flexibility that owning their own car provides.

Will that change? Things are going to keep evolving, and these developments will lead to greater and greater options. Uber and Lyft are appearing in more and more rural areas. That’s allowing options where they didn’t previously exist. But that doesn’t mean it’s always going to be more convenient to use a ridesharing service even when it’s available and affordable.

I’m an example of this. I live in a relatively rural area and I have a vehicle I drive it every day. I also have a home in downtown Chicago, and when I go to Chicago, I drive my vehicle to Chicago, park it in the garage, and use Uber when I’m in the city because parking is a hassle.

Ridesharing isn’t replacing my personal vehicle. It can’t! But it’s adding to my options. I don’t look at it as an either-or proposition, and I don’t think my customers do either. A variety of options will coexist. They’ll be additive to everything that’s on the table. It’s going to be exciting for everyone who gets to see it and take advantage of it.