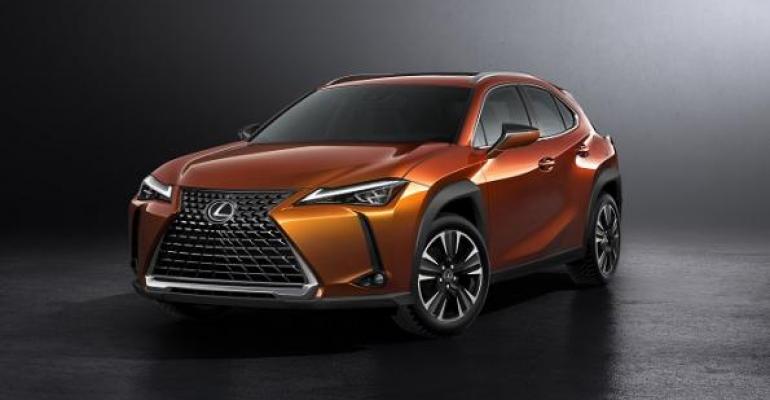 Lexus UX Unveiled, Due in U.S. in December

<p><strong><span style="font-size: 10.24px;">New predictive technology is debuting for the first time on a Lexus hybrid, which learns a driver&rsquo;s behavior, such as when he or she slowed or stopped in the past on a given route, to optimize charging and discharging of the battery.</span></strong></p>

After showing a concept at the 2016 Paris auto show, the production version of Lexus’ UX compact CUV debuts today at the 2018 Geneva auto show.

After saying last fall it was studying the vehicle for the U.S., the brand officially confirms the UX is bound for the States, with an on-sale date of December 2018.

“Our dealers are all over us to produce that concept vehicle,” Jeff Bracken, general manager-Lexus Div. for Toyota Motor Sales U.S.A., told WardsAuto last November.

The small CUV will be the first Lexus underpinned by Toyota’s new Global Architecture-Compact (GA-C) platform, with so-called “super” rigidity and a low center of gravity. Lexus claims the UX will have the lowest center of gravity among vehicles in its segment.

Like most Lexus models, the UX will be available with both conventional and hybrid powertrains.

The UX 200 has Toyota’s new 2.0L 4-cyl. making 168 hp in the CUV and mated to a new type of CVT dubbed Direct Shift, while the UX 250h combines the same engine with a fourth-generation hybrid drive system.

The Direct-Shift CVT has an additional gearset for quicker, more linear acceleration from a stop compared with a conventional belt-connected two-pulley CVT, Lexus says.

“Because the gears reduce the need for the CVT’s pulleys and belt mechanism to be used in the low range, more of the CVT’s ratio spread can be dedicated to the higher range, maximizing efficiency,” the luxury marque says.

The UX 250h is set to make 176 total system horsepower. The hybrid-drive system is said to have a compact and lightweight new transaxle and power-control unit to minimize power losses from heat and friction.

True of most Toyota or Lexus hybrids, the UX 250h will have a nickel-metal-hydride battery, not lithium-ion, with a cooling system placed below the rear seat so as not to intrude on cargo space and help the CUV maintain a low center of gravity.

New predictive technology is debuting for the first time on a Lexus hybrid. It learns a driver’s behavior, such as when he or she slowed or stopped in the past on a given route, to optimize charging and discharging of the battery.

“The more the UX 250h is driven, the more data is gathered to help optimize fuel consumption,” Lexus says of the predictive technology, which can be turned off and can increase regenerative braking up to roughly 1,000 ft. (305 m) ahead of the vehicle.

With an extra electric motor on its rear axle, the UX 250h has all-wheel-drive capability, able to send about 80% of power to the rear at speeds up to 43 mph (70 km/h) when a loss of grip is detected in a rear wheel.

The UX introduces yet another version of Lexus’ signature spindle grille, this time one using a new block-shape mesh pattern to give it a 3D appearance.

Full-width taillights with 120 LEDs decorate the rear of the small CUV and Lexus says they will become a new signature feature.

As with many Lexus interiors, the UX has elements derived from Japanese traditions. The perforation pattern on optional leather upholstery is inspired by a Japanese quilting technique known as sashiko, while a washi-paper-inspired trim finish, created via a slush-molding process, is available.

Other features of the UX interior include an instrument panel that appears to extend beyond the windshield and thin A-pillar moldings, both a way to increase outward visibility.

Uniquely shaped seat cushions are said to make entry and exit easier, while audio switches integrated into the center-console palm rest make it easier for a driver’s eyes to stay on the road.

The UX has a wheelbase identical to that of the Toyota C-HR small CUV, but the Lexus is about 6 ins. (152 mm) longer overall. The C-HR rides on Toyota’s New Global Architecture (TNGA) platform.

The UX will be entering a fast-growing segment when it arrives in the U.S. Sales in WardsAuto’s Small Luxury CUV sector rose 49.6% last year, although its 112,964-unit volume was small in comparison to that of Middle Luxury CUV (808,978). The leading seller in the group in 2017 was the BMW X1, with 30,826 deliveries. Only five models make up the group, including the Audi Q3, the Chevy Bolt EV and the Mercedes GLA and its platform mate the Infiniti QX30.