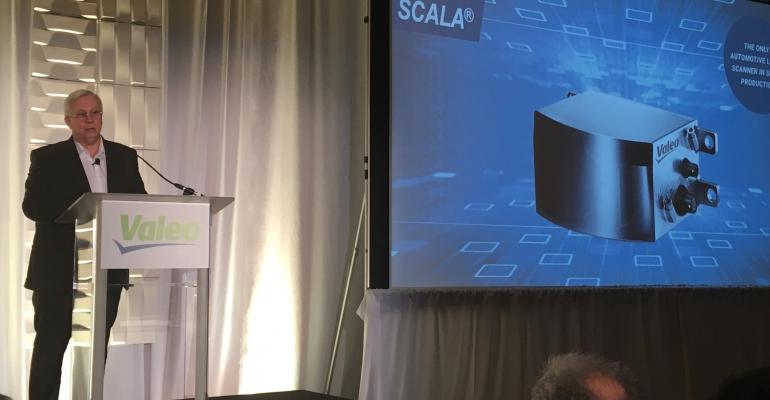 Valeo brings three world premieres to CES in its ongoing focus on shaping the future of smart, connected and self-driving vehicles.

The low-voltage two-seat car provides a range of 62 miles (100 km) and a top speed of 62 mph (100 km/h), which James Schwyn, chief technical officer-North America, says makes the model ideally suited for urban driving, comprising mainly short trips around town with only a driver.

Schwyn considers the two-seater a “practical solution” for consumers in all financial brackets.

Valeo’s goal is to create a “seamless transition” from the traditional vehicle market to that of the near-future, where cars are “smarter, cleaner and more connected.”

The French supplier, which introduced the first parallel-parking system about a decade ago, also lifts the curtain on Autonom Cab, the world’s first robo-taxi, presented at CES 2018 by its designer, Navya. The all-electric, driverless vehicle is fitted with seven Valeo SCALA laser scanners, the first and only mass-produced Lidar scanner on the market designed specifically for cars.

Introduced two years ago at CES, the SCALA system has proven a key component in autonomous technologies.

In addition, Valeo is demonstrating a new system that allows the interior climate of a vehicle to be adjusted to each passenger’s physical condition and sensitivity to temperature, when and where they need it. The system can go as far as to detect the mood for a car’s driver and release stimulating or soothing fragrances and ions, in case the driver demonstrates stress or sleepiness.

A technology that leaves observers gasping is Valeo’s XtraVue, which uses a telematics antenna installed on the car, combined with a laser scanner and Valeo’s computer-vision camera system, to show drivers what is happening on the road even outside their line of sight.

Video from other connected vehicles and roadside infrastructure cameras is shown on the car’s display. It’s like being able to see right through the obstacles in front of a vehicle.

Valeo’s other showcased technologies include the Drive4U.ai (artificial intelligence) demonstrator, fitted with cameras for analyzing the roadway environment. Working from the 360-degree 3-D view produced by the cameras, Drive4U.ai identifies all aspects of the vehicles in the immediate vicinity: shape, size, orientation and direction of motion.

In this way, it can anticipate the trajectory of the vehicles – even if one of them slips out of view momentarily – merge the captured data and make virtually instantaneous decisions on the basis of the analysis. Instead of relying on algorithms alone for achieving such rapid decision-making ability, the Valeo car uses a learning-capable neural network.

Also at CES 2018, Valeo is showcasing a solution that detects whether the car is occupied when the engine is off. Sensors in the cabin identify the number, location and morphology of people present.

A vehicle fitted with this Valeo technology will trigger a sound and light alarm, and send a message to the user’s smartphone, to ensure that no one is left behind in a stationary car.

The innovations Valeo has offered over the years, as well as the technology it’s now showing at CES, prove how the car is so “deeply part of a much wider ecosystem” of technology and connected networks, says Guillaume Devauchelle, Valeo’s vice president-innovation.