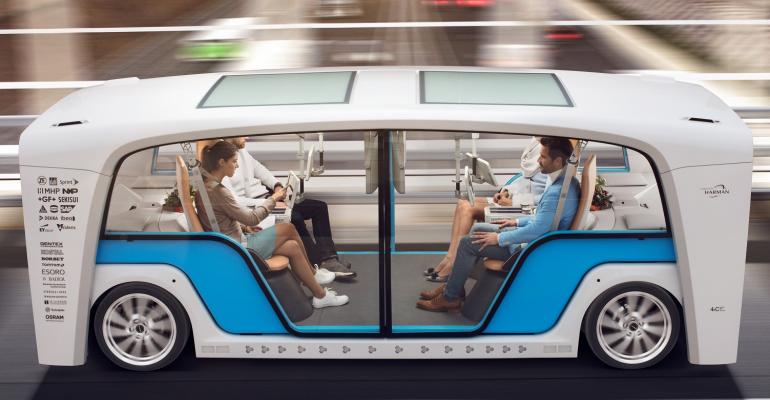 Rinspeed Snap All About POD-sibilities

Besides Toyota and others, Rinspeed sees a future of skateboard-like chassis carrying any number of pods for personal or commercial uses. Some 30 companies joined in developing the Snap concept. A prototype is on display at CES in Las Vegas.&nbsp;

LAS VEGAS – Forward-thinking companies seem to be coming to the same conclusion about what type of vehicle architecture is best suited for the age of self-driving cars achieving Level 5 autonomy, without the need for a steering wheel.

Automotive traditionalists with a deep appreciation for dramatic designs, taut sheet metal and steeply raked windshields to convey speed and motion may roll their eyes when they see images of Rinspeed’s Snap or Toyota’s e-Palette – two remarkably similar concepts unveiled on the same day here at CES.

The principle is a rolling chassis, increasingly referred to as a “skateboard” because it incorporates the wheels, drivetrain components (most likely electric) and much of the sensors and intelligence necessary for navigating specified routes without anyone at the tiller.

The skateboard would then act much like the undercarriage of a freight train, with the ability to load various cargo containers, generally the same dimension but every one of them hauling something different. General Motors advanced a similar concept with its AUTOnomy and Hy-wire fuel-cell platform 15 years ago.

The vision is shared by Frank Rinderknecht, CEO, founder and chairman of Rinspeed, a Swiss company that has delivered dozens of disruptive concepts (as well as viable products, such as controls mounted on steering wheels) for most of its 40 years.

Rinspeed’s latest idea, the Snap, looks much like a cargo container, with some softer edges, lots of glass and a more welcoming design. Rinderknecht refers to these swappable blocks as “pods,” and he says they can be whatever consumers want them to be.

Years down the road, if lots of vehicles like this are tooling around America, Rinderknecht wouldn’t be a bit surprised if people rarely saw two pods that were identical.

“Your imagination is really the limit,” he tells journalists seeing the Rinspeed this week here at CES 2018. “Let’s say you’re feeling romantic tonight, so you take your wife out in a cuddle pod. Or you have a business meeting, or you want a sauna or you want to go camping. You just order the pod you want.”

Rinderknecht envisions an “ecosystem” – a potentially massive market for companies that customize pods in the same way that thousands of aftermarket specialists across America (and particularly in Southern California) paint, modify and makeover existing vehicles exactly as customers want them, or start from scratch and deliver a one-of-a-kind car when cost is no object.

The big difference is that pods being placed atop a Snap skateboard chassis would be dedicated to countless things that can be done whether the car is moving or not, whereas traditional vehicle customization has been about creating an unparalleled driving and motoring experience.

Indeed, Rinderknecht was adamant that his design team craft a pod that looks nothing like a conventional vehicle. “I wanted it to look like a Bedouin tent in a way, so people associate it, when they see it, not as a vehicle,” he says.

He says Rinspeed has partnered with SAP, an enterprise software provider, to help create an “ecosystem” by which a vast variety of pods could be available to consumers and a separate network for maintaining the mechanical elements of the skateboard.

The Snap concept is so new that Rinderknecht says he has received little feedback from other automakers or auto suppliers. By the time the concept is displayed again at the Geneva auto show in March, he hopes to share more information about reactions to Snap.

The executive seemed genuinely surprised when told that a few hours earlier, Toyota unveiled at CES its e-Palette concept – again, a rolling chassis with rectangular pods that can be switched, from a mobile shoe store or diner to a portable medical clinic or drug store.

Toyota anticipates limitless options for decorating, styling, painting and adapting the pods, and it has partnerships with several companies whose task is to explore that potential when the e-Palette will be tested in a real-world environment during the 2020 Olympics and Paralympics in Tokyo.

“Toyota is the second- or third-largest (automotive) manufacturer in the world, and if it has the same thought, then it proves we are not on a bad track,” Rinderknecht says.

He believes Snap pods will be so flexible that, in addition to companies buying and outfitting them for retail purposes, consumers also may buy one or two for different personal uses.

The pod is designed to rest on pillars at each corner. For mobile purposes, the pod would rise on the pillars, and the skateboard would slip underneath. The pillars then would be retracted until the pod rests on the chassis and locks in place, ready to go.

When a pod is not in use, a family with small children could set up the pod in the backyard or driveway as a playspace, or as a tent for sleeping outside. For longer journeys or camping trips, the Snap also could be equipped with a range-extending internal-combustion engine.

ZF was a key partner in developing the skateboard chassis and integrating the front and rear axles, electric motor, steer by wire, additional drivetrain components and all the sensors necessary for autonomous driving. The pod would integrate infotainment, telematics, navigation and other body electronics, but the driver-assistance components only would be in the base.

Propulsion is channeled to ZF’s mSTARS electrically driven rear axle, which can steer the rear wheels 12 degrees in either direction. The mSTARS axle will appear in a production vehicle arriving later this year, the supplier says.

The front wheels can steer up to 75 degrees, making the Snap highly maneuverable. The skateboard (mostly steel) weighs in at 3,748 lbs. (1,700 kg) and rolls on 18-in. Borbet alloy wheels.

All the driver-assistance components were designed for fully autonomous Level 5 driving, says Gerhard Gumpoltsberger, ZF’s senior manager-Corporate R&D. At both the front and rear of the skateboard are one camera, two radar sensors and one Ibeo lidar unit. On the sides are four cameras, four radar sensors and two lidar units.

With the rapid pace of innovation, Rinderknecht believes most of these components embedded within the skateboard will become outdated quickly, so they can be replaced every few years if necessary. Skateboards in heavy use might wear out in a matter of four or five years and could be replaced altogether with new ones, he suggests.

“With the future demands of automated driving, Level 5, we don’t know how long the lifetime of sensors could be,” Gumpoltsberger tells journalists. “Software we can update – with sensors, it’s much more difficult.”

The challenge with such a forward-reaching project was deciding what type of sensors to use in the skateboard. “How much visualization do we need, and how much information do we need?” Gumpoltsberger asks. “We don’t know yet because we don’t have the experience. There is no industry standard yet. So we integrated here what we think could become the industry standard and what makes sense.”

Meanwhile, Rinderknecht sees the pods having much longer lifecycles, depending on how they are used. Inside the demonstration pod here is an autonomous robotic personal assistant to accompany occupants and perhaps run errands.

Rinspeed does not identify the supplier of the 12 kWh lithium-iron phosphate battery but says maximum power would be 51 kW. Range is predicted at 62 miles (100 km), and top speed is estimated at 50 mph (80 km/h).

Some 30 companies joined in developing the Snap concept, a project that took about eight months, Rinderknecht says. The prototype on display in a private exhibit at the Hard Rock Hotel hosted by multimedia supplier Harman is the only one built.