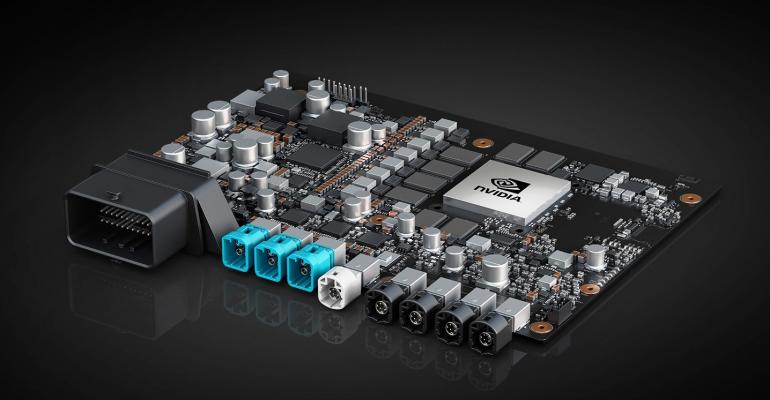 <p><strong>Xavier processor will be delivered to customers this quarter for testing and go into production later this year.</strong></p> <p> </p>
Vehicles

LAS VEGAS – Computing power and energy consumption are considered by many in the auto industry to be major roadblocks to fully autonomous vehicles in the future, but chip- and software-producer NVIDIA announces several new products at the CES show here that appear to solve these issues.

To underscore the industry’s confidence in its technologies, NVIDIA on Sunday jointly announced supply agreements with Volkswagen, Uber, ZF and Baidu for future self-driving vehicle platforms in Europe, North America and China.

At the start of the giant 2018 International CES show Sunday night, Volkswagen CEO Herbert Diess joined NVIDIA founder and CEO Jensen Huang on stage to discuss how artificial intelligence is transforming the auto industry and pointed to VW’s I.D. Buzz concept, shown at the North American International Auto Show last year, as an example of what future personal mobility will look like.

“Artificial intelligence is revolutionizing the car,” Deiss says. “Autonomous driving, zero-emission mobility, and digital networking are virtually impossible without advances in AI and deep learning. Working with NVIDIA, the leader in AI technology, enables us to take a big step into the future.”

“In just a few years, every new vehicle should have AI assistants for voice, gesture, and facial recognition as well as augmented reality,” Huang adds. “Working with Volkswagen, we are creating a new generation of cars that are safer and more enjoyable to ride in than anything that has come before.”

The key enabler of these advancements will be NVIDIA’s Xavier processor, which will be delivered to customers this quarter for testing and go into production later this year, Huang says.

It will power the NVIDIA DRIVE software stack, and a trio of AI and artificial realityplatforms covering every aspect of the experience inside next-generation vehicles, Huang says.

The Xavier processor has more than 9 billion transistors and is the most complex system on a chip ever created, Huang says, yet it requires a fraction of the electricity to run than far less powerful processors.

Xavier represents the work of more than 2,000 NVIDIA engineers and a $2 billion investment in research and development.

For the even more demanding task of piloting fully autonomous taxis, two Xavier processors are teamed up to form what NVIDIA calls its Pegasus AI computing platform.

Pegasus delivers the performance of a trunk full of PCs in a chip the size of a license plate and is claimed to be the world’s first processor specifically designed to drive fully autonomous robotaxis.

Customers will get the first samples of Pegasus, capable of processing 320 trillion operations per second, in mid-2018.

More than 25 companies already are using NVIDIA technology to develop fully autonomous robotaxis and Pegasus will be their path to production, the company says. NVIDIA is working with more than 320 companies and organizations on autonomous vehicle development, Huang says.