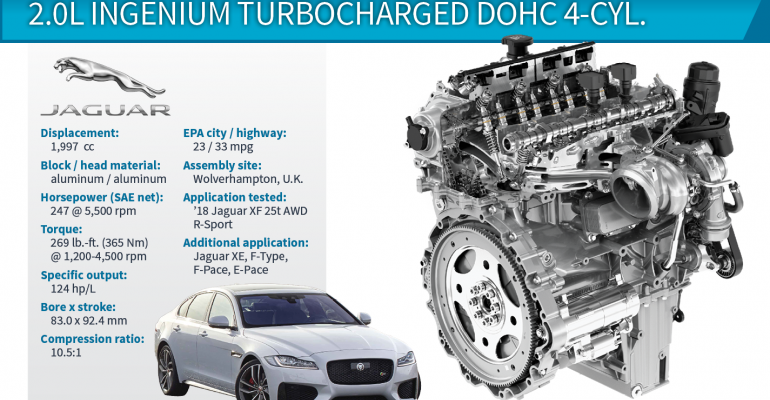 The variable-geometry turbocharger spools up quickly, helping deliver peak torque at an astonishing 1,200 rpm &ndash; barely faster than idle speed. &ldquo;The torque gushes in like a firehose right after idle and doesn&rsquo;t stop,&rdquo; editor Drew Winter writes on his scoresheet.

Considering how luxury brands have been flooding the market with premium turbocharged 4-cyl. gasoline engines over the past several years, it seemed odd this year to have only four in the running for the 2018 Wards 10 Best Engines competition.

Last year, there were nine – from Alfa Romeo, Audi, BMW, Mercedes-Benz, Porsche and Volvo (many of them hybrids), and it was 2.0L turbocharged 4-cyl. engines from Mercedes and Volvo that prevailed within a hotly contested segment. The Volvo powerplant also benefited from supercharging.

Our competition focuses only on the all-new or significantly improved engines each year, up against the prior year’s winners, so the field is always predicated on automaker product launch cycles.

We were fully prepared to forego a luxury 4-cyl. turbo on this year’s list until the Jaguar XF sedan, with its sterling Ingenium engine, arrived just before our testing cycle concluded and swept us off our feet.

Ingenium is a family of all-new Jaguar Land Rover engines – both gasoline and diesel – homegrown by JLR powertrain engineers at the Engine Manufacturing Centre in the West Midlands, independent of any previous ties with Ford.

There are two versions of the Ingenium gasoline 2.0L turbocharged 4-cyl., but we tested the low-output variant, rated at 247 hp and 269 lb.-ft. (365 Nm) of torque. Those numbers fall in line with other luxury-leaning turbo-4s, but this new Jaguar powerplant ranks with the best of them, cruising confidently and displaying plenty of punch for every situation.

Contributing to the performance of this scalable engine architecture is a unique electrohydraulic valvetrain, direct fuel injection and a map-controlled oil pump that matches the flow rate according to engine speed, load and temperature, reducing parasitic losses. Switchable piston cooling jets only spray oil onto the underside of the piston crowns when required.

Engineers set out for minimal friction and succeeded by offsetting cylinder bores by 12 mm, resulting in greater efficiency and refinement. The deep-skirt aluminum block features thin-wall, press-fit cast-iron liners, which the engineers wanted for surface finish and robustness.

“The torque gushes in like a firehose right after idle and doesn’t stop,” editor Drew Winter writes on his scoresheet. “And it works especially well with the all-wheel-drive system, a feature that tragically saps the willpower from lesser 2.0L engines. This is a 4-cyl. worthy of Jaguar.”

Other editors say the engine “feels like a V-6, and a good one at that,” and they appreciate the distinctive engine sound under acceleration – powerful, yet refined.

It’s great to hear Jaguar planning battery-electrics and plug-in hybrids for the future, but it’s equally encouraging to see the brand holding fast to world-class internal-combustion as well.

When 2019 Wards 10 Best Engines testing fires up again next fall, we’ll be testing Jaguar’s returning winner, as well as a 296-hp variant of the 2.0L turbo-4 available across much of the brand’s lineup.