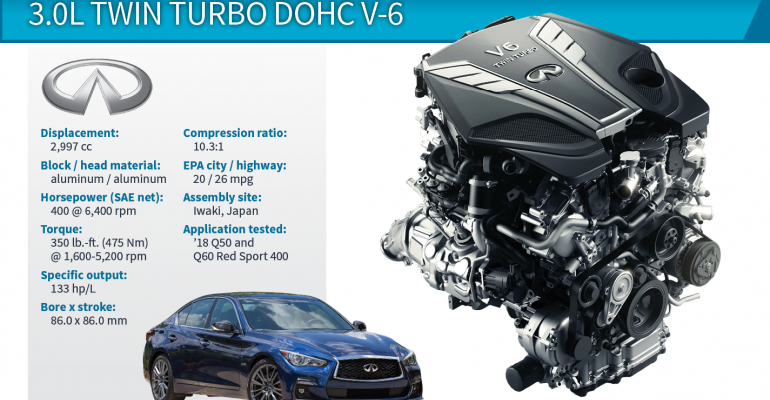 The VR V-6 knocks out zero-to-60 in less than five seconds, never seems at a loss for extra punch at highway speeds and its responsive throttle repeatedly brought out the mischievous child in WardsAuto judges.

With the growth of turbo 4-cyl. engines in recent years, the future of the one-time ubiquitous high-feature V-6 had come into question. But the 3.0L twin-turbo VR V-6 in the Infiniti Q50 sedan and Q60 coupe confirms these silky smooth powerplants will be around for years to come.

At 400 hp and 350 lb.-ft. (475 Nm) of torque, as tested, the returning winner is a delight for driving enthusiasts: it knocks out zero-to-60 mph (97 km/h) in less than five seconds, never seems at a loss for extra punch at highway speeds and its responsive throttle repeatedly brought out the mischievous child in WardsAuto judges.

But it’s a sophisticated brute, too, with gasoline direct injection, electrically variable-valve timing and an electrically variable-displacement oil pump. It uses the latest friction-reducing technologies and a weight-saving, heat-reducing exhaust manifold design within the cylinder heads. Employing two turbos instead of one, lag is a veritable no-show.

Like those wildly popular boosted 4-cyl. units, the 3.0L VR V-6 also is an exercise in downsizing. Developed exclusively for Nissan’s premium Infiniti brand, it fits where the Japanese automaker’s outstanding but larger 3.7L VQ V-6 (a multiple Ward’s 10 Best Engines winner) would likely be employed otherwise. The result was fuel economy topping 23 mpg (9.8 L/100 km) during testing, which is quite a feat for an engine that begs to run freely.

The VR V-6 was built with an eye on the future, too. Nissan engineers say the engine architecture is flexible enough to accommodate emerging technologies to meet rising fuel-economy and tailpipe-emissions standards.

But as it stands today, the VR 3.0L demonstrates the high-feature V-6 definitely is here to stay and may only get better with age.