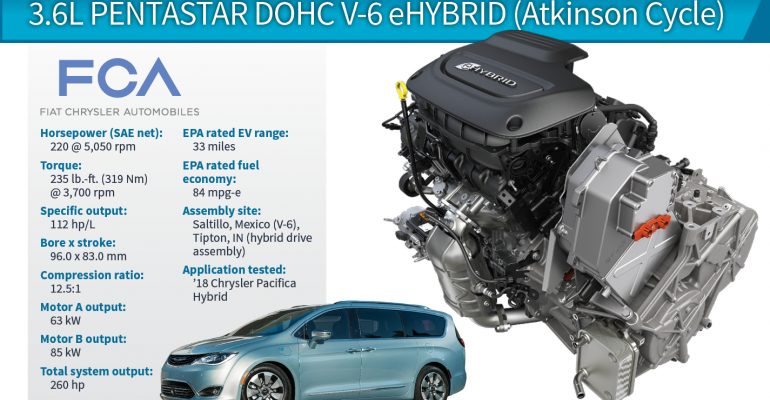 The heart and soul of the industry’s only hybrid minivan is a Fiat Chrysler propulsion system mating the automaker’s stellar 3.6L Pentastar V-6 with an FCA-developed dual-motor, electrically variable transmission.

Making a big minivan into a plug-in hybrid with 33 miles (53 km) of fully electric range seems a bit of head-scratcher until you experience the remarkably efficient Chrysler Pacifica eHybrid, a returning 2018 Wards 10 Best Engines winner.

The Pacifica eHybrid is a big, 7-passenger minivan with all the bells and whistles families have come to adore, but with levels of fuel efficiency unimaginable just a few short years ago.

“Five hundred-plus miles of range makes it practical and economical,” says WardsAuto editor Jim Irwin. “Give Chrysler credit for believing the masses will warm up to hybrids.”

It appears the masses, or at least many Pacifica eHybrid owners, have warmed up nicely to the industry’s only hybrid minivan.

FCA US says of the 100 Pacifica eHybrid customers participating in monthly ownership-experience surveys over a two-year period, 47% of respondents report more driving range than expected and 22% say they have observed “much more.”

The heart and soul of the minivan is a Fiat Chrysler propulsion system mating the automaker’s stellar 3.6L Pentastar V-6 with an FCA-developed dual-motor, eFlite electrically variable transmission. Unlike most electrical drive units, where one motor is dedicated solely as a generator and a second exclusively putting torque to the wheels, the eFlite system uses both to power the wheels. This permits a smaller drive motor, which smartly reduces the system package.

During the recent judging process, WardsAuto editors kept the Pacifica eHybrid on the charger as much as possible to regularly wring out nearly 35 mpg (6.7 L/100 km) during testing. Oftentimes the minivan outdid its pure electric range, too, including one occasion in EV-unfriendly chilly temperatures where it was driven 27 miles (43 km) but drained just 17 miles (27 km) of range from the battery.

With most Pacifica eHybrid owners presumably using their minivans to run errands around town on battery power and occasionally the long-distance drive with the ICE to fall back on, a hybrid minivan is no head-scratcher. It’s a stroke of genius.