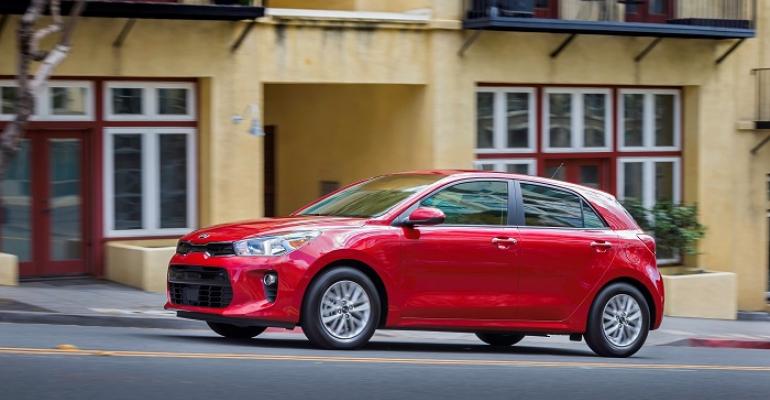 Both sedan and 5-door body styles grow modestly in overall length, but the slight increase boosts their wheelbases and improves interior volume.

The next generation of Kia’s smallest car in the U.S. makes its U.S. debut at the New York auto show following last fall’s global unveiling at the Paris motor show.

Kia’s new Rio subcompact goes on sale later this year in the U.S. It has an updated version of the brand’s tiger-nose grille. The new B-car, still available in sedan and 5-door body styles, also has swept-back headlights and fog-lamp surrounds that protrude to make its front fascia appear wider.

Both body styles grow less than 1 in. (25 mm) in overall length, but interior room is improved. Kia claims near class-leading passenger volume for both the sedan and hatch, with more shoulder and legroom front and rear and additional headroom up front.

The front seats are more comfortable than in the previous model thanks to added cushioning. Despite the additional padding, the new seats are slimmer, Kia says.

The ’18 Rio adheres to current industry trends for redesigned models. It is lower and wider than its predecessor while wheels are pushed out to the corners for a more athletic stance. 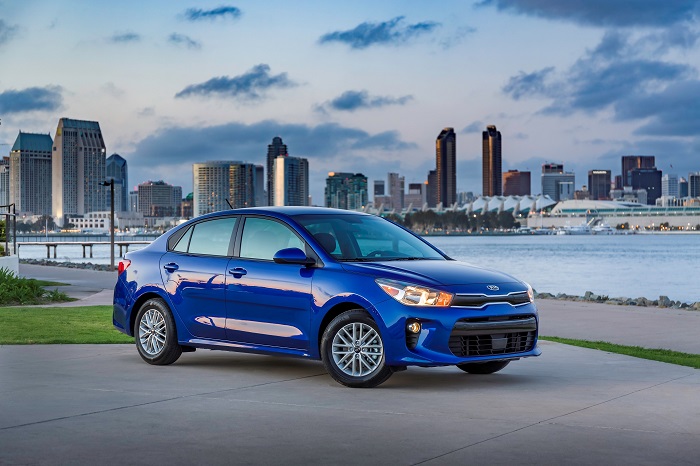 A shoulder line crease runs the length of the car’s profile, which is meant to lengthen the car visually and makes the new subcompact appear “sleeker,” Kia says.

Interior space is increased and the cabin looks more modern and upscale, with improved materials and ergonomics compared with the outgoing Rio, the automaker says.

Horizontal lines on the IP recall the exterior shoulder line and make the subcompact’s interior appear wider. A new bi-level storage tray in the center console is meant to be a landing spot for phones and smaller tablets.

Kia’s UVO3 infotainment system with voice recognition and Apple CarPlay and Android Auto, as well as a 7-in. (18-cm) touchscreen, is standard only on the top EX grade of the Rio, but buyers of the lower S grade get Bluetooth connectivity.

Buyers of the sedan and hatch still can choose between a 6-speed manual or a 6-speed automatic transmission.

The car has “completely new” suspension geometry, Kia says, but it still uses a MacPherson strut design in the front and a torsion beam in the rear. In an effort to make handling more agile and improve ride comfort, the spring and damper arrangement is changed.