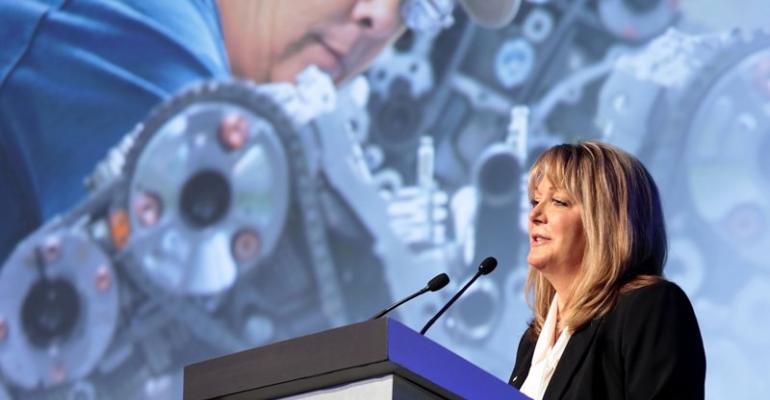 ‘Little Engine Plant That Could’

TRAVERSE CITY, MI – Leah Curry calls the factory she runs “the little engine plant that could.”

Actually, it’s not that small, and parent company Toyota just pumped $400 million into it as part of the Japanese automaker’s ambitious global manufacturing modernization program.

Curry is president of Toyota Motor Manufacturing West Virginia located in Buffalo, WV. The 21-year-old factory manufactures 4- and 6-cyl. engines and automatic transmissions for an array of Toyota models sold in the U.S., including the Camry, Corolla, Highlander, Sienna and Lexus ES 350.

The plant employs 1,600 people and produces 650,000 engines and 740,000 transmissions a year, Curry says at the “World Class Manufacturing” session here at the 2017 Center for Automotive Research’s Management Briefing Seminars.

The modernization initiative at the factory is tied to the new TNGA (Toyota New Global Architecture) platform that aims for greater efficiency and lower costs.

“It is smarter manufacturing,” Curry says.

The all-new ’18 Camry is the first vehicle to be built in the U.S. on the new platform at Toyota’s Georgetown, KY, assembly plant.

“It’s totally rethinking the building of vehicles, and includes thinking forward a decade,” Curry says of Toyota’s ambitious TNGA effort. “It was born from intense reflection by our company. TNGA is a game changer.”

It includes a series of efficiencies that cut required resources 20%, yet improved the performance and quality of the finished product, whether it is an engine or a fully assembled vehicle, she says.

Investments include plant retooling (at a much lower cost than traditional methods, Curry says) and floor reconfigurations. It created modular flexible work areas. “Workers can now move down the line with the engine,” Curry says.

During what she calls an aggressive 12- to 14-month timeline, the West Virginia plant’s employees will undergo about half a million hours of training “before being considered TNGA-ready.”

Curry began her career with Toyota 20 years ago at the automaker’s assembly plant in Princeton, IN. Back then, that factory and Georgetown were Toyota’s only manufacturing-related facilities in the U.S. Today, there are 10 across the country, she says.

Curry’s a gearhead, as are three of her sons. She recalls a Toyota project in which she took a transmission apart and reassembled it. One of her sons asked her, “Did it still work after you put it back together?”

She told him of course it did. But she notes the transmission didn’t go into a salable model.