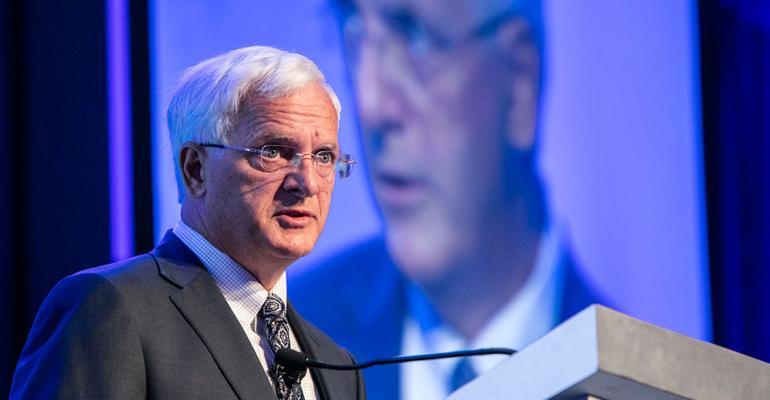 TRAVERSE CITY, MI – The audience is high-ranking auto executives and engineers, but the message is the need to get more people who work with their hands trained and employed in an auto industry that faces a shortage of such skills.

He lays out some sobering statistics: Tool-and-die shop numbers dropped by a third between 1997 and 2012, today’s average U.S. toolmaker is about 52 years old and much of such automotive-supplier work has been outsourced to other countries.

“The shortage in talent has delayed vehicle launches,” Baron says in pleading the case for initiatives to recruit and train automotive apprentices.

One such effort, the Center for Advanced Automotive Technology, is associated with the curriculum at Macomb Community College in metro Detroit.

Aiding the cause are major automakers and suppliers, including General Motors, Ford, Fiat Chrysler, Magna, Siemens, American Axle and Bosch.

“We can’t continue to play catch-up,” Richman says. “We in this industry own the problem. We need to be in front of it, not reacting to it all the time.”

Baron calls for addressing the issue broadly. He calls on automakers, suppliers and academia to help “resurrect the pipeline” of skilled tradespeople.

He notes several internal apprentice programs were scrapped when the auto industry was hit hard by last decade’s recession. “Restoration of those programs should be reconsidered.”

Michigan Lt. Gov. Brian Calley, in a speech to conference attendees, says part of the solution is for society to show more respect to people whose education pursuits might not include a 4-year college degree and beyond.

“For the longest time, we’ve been told that pursuing careers like tooling is what you do because you are not good at academics, which is absolutely ridiculous,” he says.

Calley, age 40, says, “It was (that) way when I was in school, but that group got the last laugh because they went on to successful, well-paying careers.”

He says he is not proposing a revamping of the state curriculum, but extols the “benefits of learning with your hands.”

It’s vital to attract talent for skilled-trades apprenticeships early on, Calley says. “After high school is too late. You’ve got to go earlier, including middle and grade schools. It’s not putting a kid on a track, it’s showing the opportunities.”