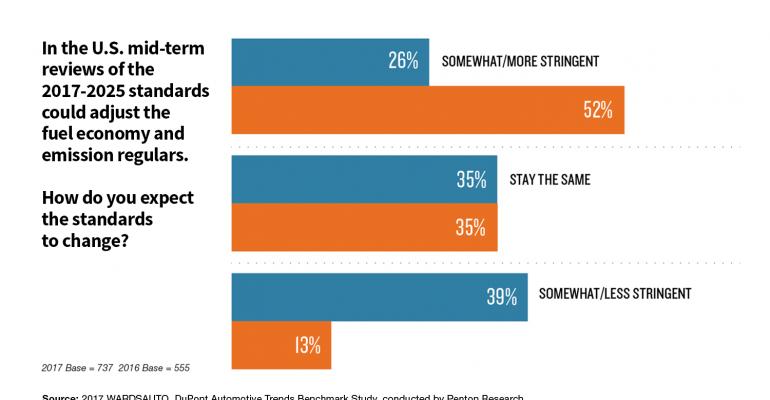 Survey results represent a major change in thinking among many key people who create new cars and trucks in the U.S., almost certainly the result of last year&rsquo;s election.

What a difference a year makes. After consistently predicting U.S. emissions and fuel-economy rules likely would be made even tougher than originally anticipated for the ’22 model year and beyond, a large percentage of automotive engineers and designers now believe government rules will be relaxed going forward to 2025.

This represents a major change in thinking among many key people who create new cars and trucks and almost certainly reflects the results of the last election and President Donald Trump’s promise to reduce government regulations on businesses.

WardsAuto has been surveying members of the automotive engineering and design community since 2011, and this is the first year when so many believe rules will be eased to recognize changing U.S. marketplace realities.

The annual survey is sponsored by DuPont Automotive and conducted by Penton Research, a business unit of WardsAuto’s parent company.

In this year’s survey, conducted in June and July, 39% of the 737 respondents said they expect the standards for fuel economy and emissions to become less stringent going forward. This is a stark contrast to the 2016 findings, when 52% expected them to become more stringent than originally outlined and only 13% expected them to be relaxed. 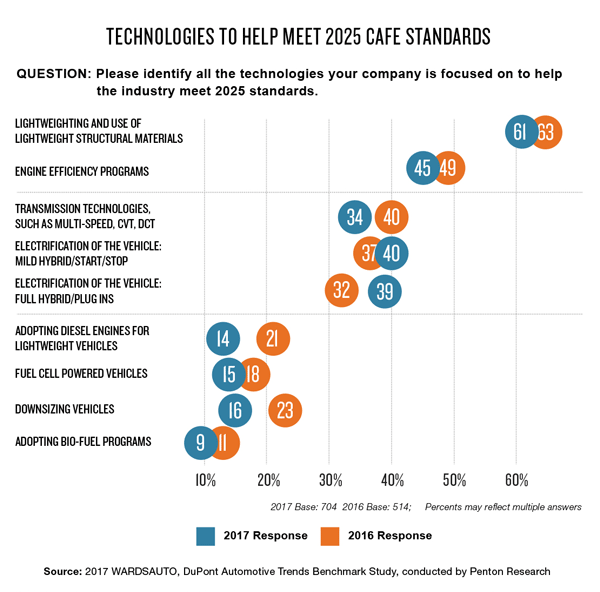 These factors led to speculation the EPA might be willing to ease some goals, but until the Trump Admin. came into office, few believed it would happen.

During the past six years WardsAuto asked this survey question, a strong majority of respondents expected the U.S. government’s 2025 targets would be made even tougher than originally mandated or at least stay the same following the midterm review of the standards.

However, in a global industry, the impact of a potential rollback of federal rules in Washington is unclear. California’s powerful Air Resources Board is the tail that wags the dog in the U.S. automotive regulatory arena, and the state has vowed to stand behind its aggressive mandates for zero-emissions vehicles.

The rest of the world’s major automotive markets also have not shown interest in weakening their emissions rules, which could complicate rather than simplify the development of future new-vehicle architectures, almost all of which are designed to accommodate global standards.

The EPA’s midterm review of fuel-economy rules for the ’22 through ’25 model years officially started a little over a year ago but was abruptly ended by the EPA’s previous leadership following last year’s presidential election. The Trump Admin. reopened the review process, which is expected to run through April 2018. 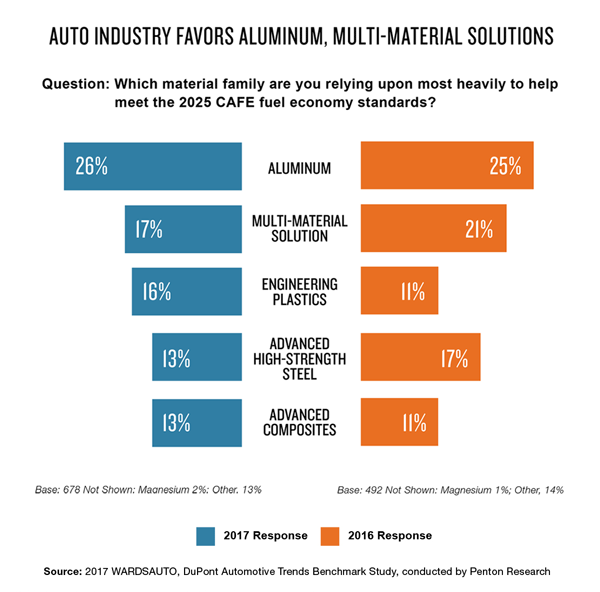 Whatever happens with government regulations, respondent companies remain most likely to focus on lightweighting and use of lightweight structural materials to help meet the 2025 standards (61% in 2017; 63% in 2016), followed by engine-efficiency programs (45% in 2017; 49% in 2016). However, electrification technologies also saw appreciable gains in this year’s survey.

All-electric vehicles saw a substantial bump this year, from 18% to 29%.

Confidence in today’s materials portfolio being able to meet the demands of the future remains unchanged, with half moderately certain and the other half evenly split between high and low confidence.

The auto industry’s massive shift into self-driving technology is affecting R&D spending in some areas, with 39% of respondents saying it is having some impact on other budgets and 8% reporting they are seeing a major shift in resources from incumbent development programs. Even so, 53% report no negative impact. 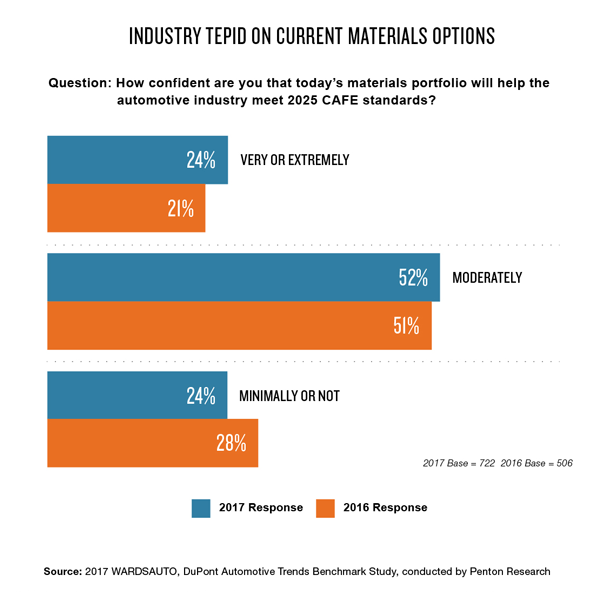 A majority of 64% believe limiting visas for the hiring of foreign workers will make it harder to fill at least some of these high-skill positions.

Data collection and analysis was conducted by Penton Research, the research arm of Penton, parent company of WardsAuto. The 2017 data was collected June 13 through July 12, 2017.