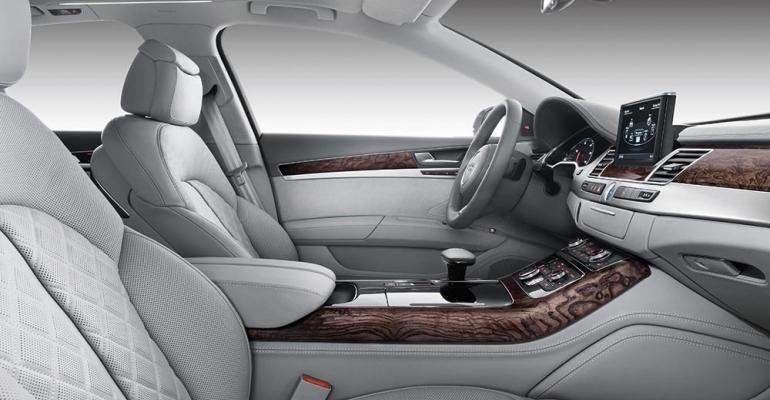 We think this chapter of Audi&rsquo;s dominance peaked in 2011 and 2012, when the magnificent A8 and A7 were named Ward&rsquo;s 10 Best Interiors. &nbsp;

For years, Audi was the undisputed benchmark in luxury interiors. Now, suddenly it isn’t. What happened?

The automaker still has cars and CUVs with gorgeous interiors laden with rich materials and bristling with advanced technology. It hasn’t taken a step backward. The problem is it has not stepped forward as fast as key competitors.

Over the past 10 years, Audi has been rapidly expanding its product portfolio and the number of segments in which it competes.

At the same time its design resources were being spread over more vehicles, almost every automaker in the world was studying Audi cockpits and doing its best to emulate them.

Meanwhile, some of the German automaker’s star designers were moving on to other automakers, as designers frequently do. In one example, Audi designer Peter Shreyer moved to Kia in 2006 and now heads global design at Kia and Hyundai.

For well over a decade, Audi has forced automakers to deliver better interior design with lines that flow instead of stack up into jagged intersecting lines that look like a Jenga puzzle. It has emphasized the importance of craftsmanship and used good design to show it off. Audi has led the way in using more natural-looking materials, and it also has been the first to introduce the latest technology to the vehicle cabin, such as Wi-Fi and Google Maps.

But we think this chapter of Audi’s dominance peaked in 2011 and 2012, when the magnificent A8 and A7 were named Ward’s 10 Best Interiors. Since then, models such as the Allroad, RS5, A3 and Q5 look like Audi is treading water stylistically while Mercedes, BMW and Tesla are stepping up with bold new design languages.

Tesla changed the whole conversation about interior design with the Model S instrument panel being dominated by a huge touchscreen. Then the new Mercedes S-Class introduced a new design vocabulary that combines retro and modern visual cues into a distinctive, modern look that now has made its way all the way down to the C-Class.

And formerly ultra-conservative BMW leaves us speechless with the innovative design of its i3 electric car.

That’s not to say Audi is standing still. Audi’s new “virtual cockpit” in the new TT and R8 gives a taste of where Audi is heading by using a large, high-definition display that replaces all mechanical gauges with digital animations that can be reconfigured.

By itself, it is not a game-changer. But it may mark the beginning of a new game-changing era at Audi.